2021 VFLW Round 10 preview: Pride on the line in more ways than one for huge round of action 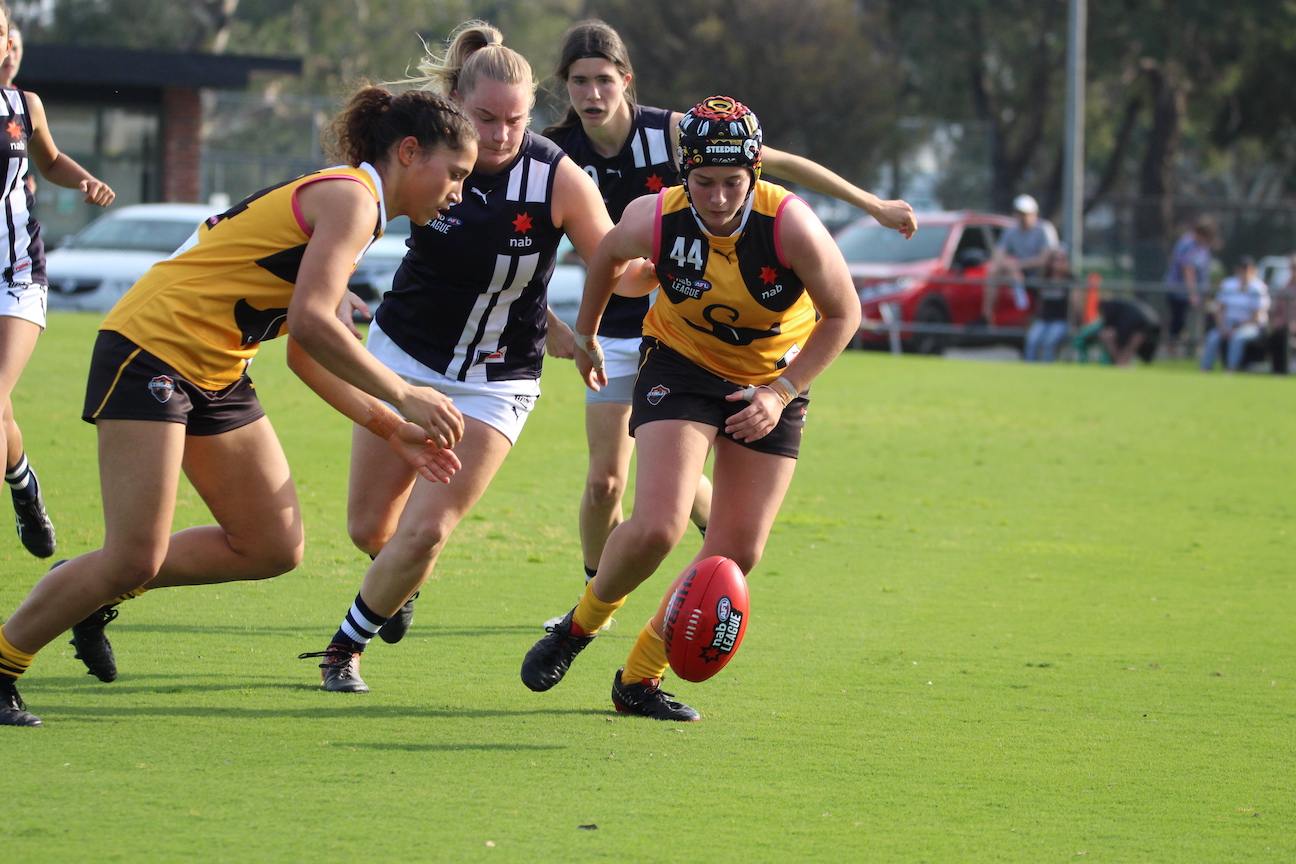 THE Victorian Football League (VFL) Women’s Pride Round kicks off in a Super Saturday stretching from the mid-morning to a game under lights, with plenty on the line and a number of virtual elimination finals or finals tuneups.

Opening the round is a must-win clash for Hawthorn hosting the last placed Darebin Falcons. If the Hawks get up, they are still a chance for finals, but a loss will all but put a line through their chances. For the Falcons, finals is a bit beyond them, but they will be hoping to double their wins tally with a victory here, and finish strongly in the last five rounds. Gippsland Power’s Grace McRae made her debut in the brown and gold last week, and another young talent will join her this week with Ashanti Bush cracking through to team up with fellow Darwin Buffettes prospect Dominique Carbone. The AFL Women’s Academy member will start on the bench, whilst Calder Cannons’ Peppa Poultney is back in the team after her side was eliminated from the NAB League Girls competition, and ex-Pioneer Katelyn Hazlett back for her second game after a strong debut. Given the AFL Women’s experience that keeps building at the Hawks, the latest is Geelong Cats’ Phoebe McWilliams who teams up with fellow experienced tall Meg Hutchins in attack. The Hawks have plenty of present and former AFLW talents, so expect they will be too strong in this one.

A virtual elimination final takes place at midday on Saturday, with the loser of Western Bulldogs and Carlton effectively putting a line through their finals hopes. For the winner, they live to fight another day, which means there is plenty on the line for the teams. The Western Bulldogs have brought back Jess Fitzgerald to the team, with Kirsten McLeod and Naomi Ferres coming in for their first games of the season. Brisbane Lions’ Beth Pinchin is an interesting inclusion for the Dogs at centre half-back, while Western Jets’ Caitlin Sargent, Nikita Wright and Stephanie Asciak all remain in the side. For the Blues, they have kept fairly consistent wiht their lineups, getting games into Charlotte Hammans, Maddy Guerin and Serena Gibbs. Abbie McKay, Grace Egan and Daisy Walker all return for their second games back at the level, and Natalie Plane for her first, in what is a tough game on the road. The Dogs have that bit more class about them, but it will be whether or not they can win the midfield in what looks like a star-studded group on both sides.

Two teams headed for finals will clash in a blockbuster VFLW match at Deakin University. Geelong have been strong down there, and with Stephanie Williams, Sophie Van De Heuvel, Rebecca Webster and Richelle Cranston all in the side, there is enough AFLW talent to lead by experience. Carly Remmos remains but Darcy Moloney and Laura Gardiner are out of the side after suffering repeated leather poisoning each week. They take on an Essendon side that is building very nicely, bringing in Bendigo Pioneers’ Jemma Finning for her debut this week, switching in for another Pioneer in Elizabeth Snell. The Calder Cannons talents feature all through the emergencies with talls Kasey Lennox and Neve Crowley likely to come in the following week, while Mia-Rae Clifford and Georgia Nanscawen represent AFL Women’s experience. The defence is solid for the Bombers, as Eloise Gardner and Courtney Ugle will provide some run and carry, while Ruby Svarc is a natural ball-winner and will provide good defensive pressure inside 50. At home Geelong has the upper hand, though the Bombers are a chance in this one.

In the traditional timeslot on Saturday afternoon, North Melbourne host Collingwood in a must-win clash for the Roos. The Magpies are cruising along nicely at 9-0 and unless the wheels completely fall off, a top two spot – and likely minor premiership beckons. The Magpies have brought in Mikala Cann for her first VFLW game of the season, giving the Pies mostly an AFLW spine including Sophie Alexander, Abbi Moloney and Maddie Shevlin, whilst Jasmine Ferguson has been one of the most reliable defenders in the competition. Add in the dangerous Matilda Zander up forward and the ball-winning Marla Neal in midfield, and the Magpies have plenty of top VFLW talents as well. For North Melbourne, they remain determined to keep a fairly consistent VFLW lineup, with Alexia Hamilton and Reni Hicks a couple of former AFLW players while Sarah Skinner and Meagan Kiely join them in the midfield as in-form talents. Camilla Taylor returns to the level after Tasmania Devils’ exit from the NAB League Girls competition, while Molly Eastman is another Roo in great form. They have had a real mixed bag this season, but are not without a chance the Roos, though the Pies are deservedly favourites for this clash.

Southern Saints can go a long way towards securing a finals spot with an upset win over top two side, Port Melbourne at ETU Stadium on Saturday. The Saints hold the precious sixth spot, and still will after this round given their far superior percentage to the chasing pack, but cannot afford to drop too many or the lower teams will pounce. Dandenong Stingrays co-captain Ash Richards and versatile runner Jaide Anthony both make their debuts at VFLW level, but unlike many of their teammates, they will be running out for the opposition side Port Melbourne. They are joined in the side by Maddy Brancatisano who returns to the level for the first time this season, with a host of current and past AFLW talent, including Katherine Smith, Sophie Molan and Emily Harley who stood up last week with four goals. Zoe Hill has been named as an emergency for the Saints, with Jemma Radford retaining her spot in the back pocket for some Dandenong Stingrays flavour, and the AFLW talent led by Alice Burke, Tahlia Meyer and Renee Saulitis. Port Melbourne have more depth in the side and should win, with the Saints needing to make the most of their chances if they are to get up.

Playing a special Saturday night game under lights for the Pride Round under lights at Downer Oval, Williamstown will be hoping to cause a boilover agains a strong Casey Demons side that is gearing up for finals. The Seagulls need to win the remainder of their games to qualify for finals just about, and have been able to welcome Gold Coast Suns’ Bess Keaney to the lineup. She will lineup in the back pocket, with Georgia Garnett also coming into the defence for her debut in the VFLW following the announcement that Williamstown had formed a link with the GWS GIANTS. Lisa Steane has also been named in the side, with Ella Baxter, Aimee Whelan and Ruby Tripodi among the in-form players. Casey Demons have a damaging forward line with Maddison Gay, Alyssa Bannan and Imogen Milford one of the strong forward trios going around. Libby Birch in defence, Eden Zanker and Megan Fitzsimon in midfield, and the newest debutant Grace Matser – a Gippsland Power ruck – will all provide plenty of talent and depth around the ground.