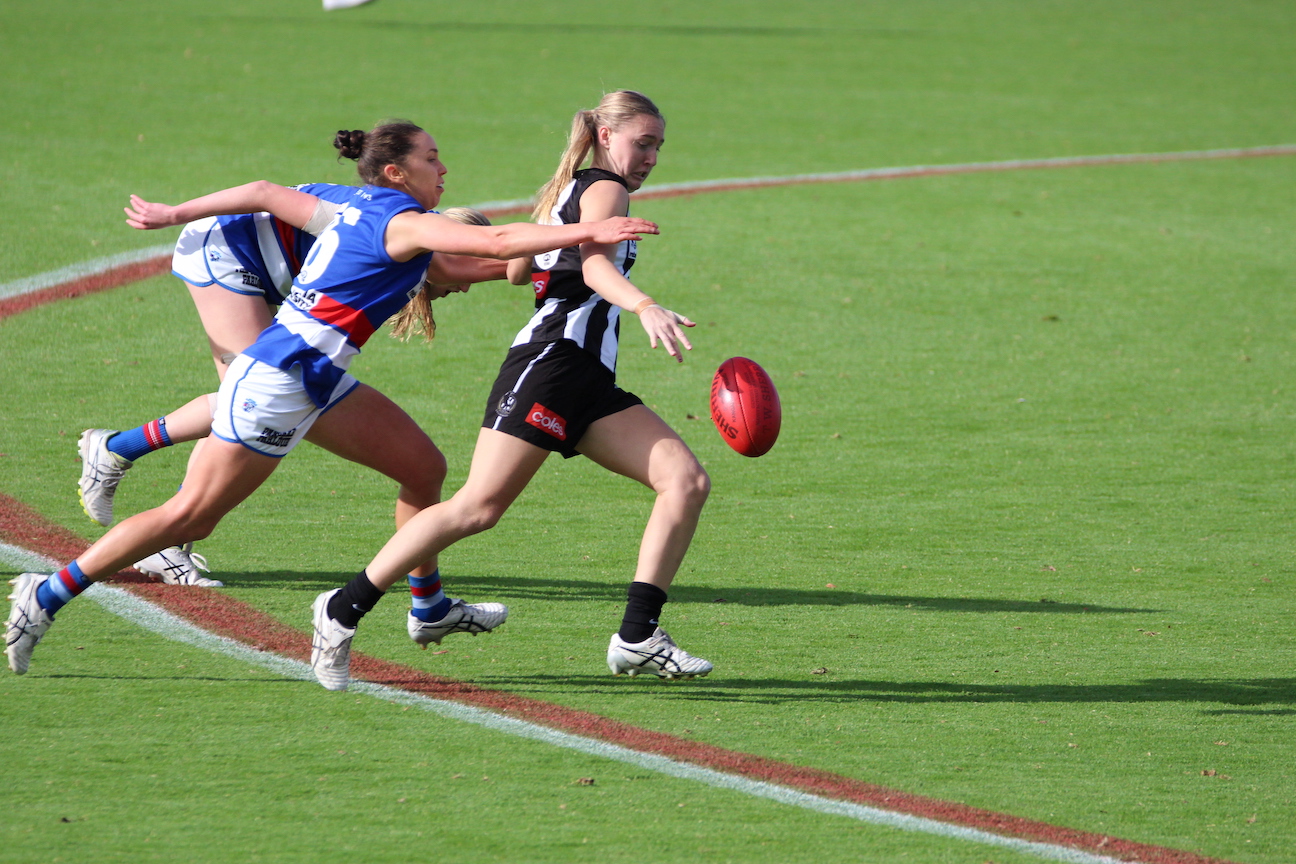 Eliza James in action for Collingwood's VFLW side

IN an early look at the upcoming AFL Women’s 2021-22 season, Draft Central checks out each of the 14 clubs over the next three weeks ahead of preseason commencing. Next up is Collingwood, a team that kept rising up to within a kick of a grand final, competitive all the way to the end.

After getting a taste of finals in 2020, Collingwood’s rise from 2019 wooden spooners continued into 2021 with seven wins from a possible nine games and a third placed finish. The Magpies might have been lower scorers than other sides (ranked seventh overall), but their defence was better than anyone else in the league, led by the likes of Stacey Livingstone and Ruby Schleicher, who conceded a measly 21.1 points per game throughout the season. Under second year coach Steve Symonds the Magpies came agonisingly close to toppling eventual premiers Brisbane a week before – after a sterling come-from-behind win over North Melbourne in the elimination final – in what was another spirited effort indicative of their season.

After such a wonderful season, the Magpies did not need to go to the off-season to fetch too many needs, but were required to replace some height with both Abbey Green and Sharni Norder retiring. It meant the Magpies lost two of their key position players, which saw the black and white stripes facilitate a deal that sent Maddie Shevlin to Richmond in exchange for Sabrina Frederick. When veteran Blue Alison Downie was left without a contract, the Magpies snapped up the Carlton ruck to add immediate firepower to the area. Collingwood then headed to the draft with three consecutive picks in the Victorian pool, picking up a couple of players who had already played for the Magpies in the VFLW in Eliza James and Imogen Barnett – the latter of whom won the competition’s leading goalkicker – as well as Eastern Ranges and Hawthorn VFLW forward Elose Chaston, adding plenty of dimensions inside 50 to increase the scoring potency of the club.

Collingwood was the highest-finishing Victorian team last season and with the changes to the squad lists, there are no reasons why they cannot get there again. Their defence is untouched, they have replaced the talls lost to retirement, and then filled their one perceived area of improvement inside 50 with scorers, and have a well-balanced team list that could be a contender. The Magpies have always provided a challenge over the past two seasons, and with continual players stepping up when required and playing their role each week, the team is capable of a big future, and expect the Magpies to be thereabouts again in 2021-22.