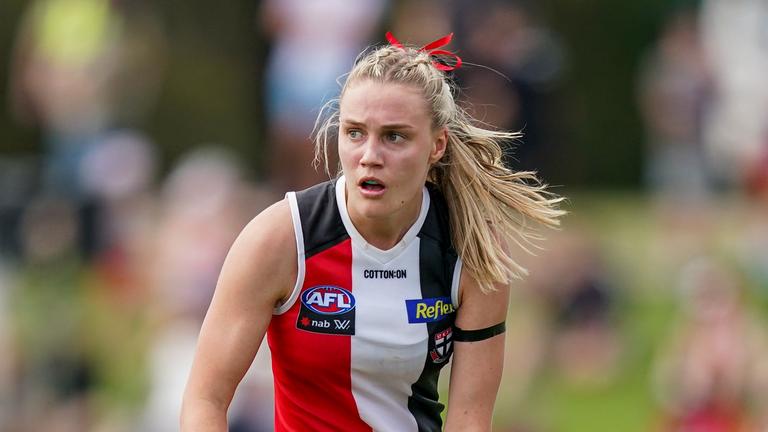 THE 2022 AFL Women’s season is almost upon us, so it is time to take a look at each of the competing teams and see where they sit as we head into another season. Today we will take a look at St Kilda, who finished 11th in 2021.

Season 2021 started well for the Saints, with an exhilarating win against the Bulldogs. After that though, they only managed two more wins for the remainder of the season.

They ultimately finished 11th on the ladder, with a highlight of the season being a 56-point final round thrashing of West Coast. But that was then, and this is now. The 2021 off-season St Kilda had meant that 2022 is likely going to be a challenging year.

Firstly, inaugural coach Peta Searle is no longer at the helm, after leaving to pursue other professional opportunities. She was replaced by former Roo and Saint Nick Dal Santo, who has got an interesting challenge on his hands heading into 2022

In terms of recruits, the Saints brought in Alana Woodward as a delisted free agent, Paige Price as a rookie and Lucy Burke as a replacement player from the club’s VFLW side. They then headed to the draft and brought in Leah Cutting as undrafted free agent, following first round picks, Ella Friend and Ashleigh Richards.

In terms of those who have left the club, Poppy Kelly went to Richmond, Claudia Whitfort went to Gold Coast and Selena Karlson retired, while Alison Brown, Clara Fitzpatrick, Tamara Luke and Nadia Von Bertouch were all delisted.

This preseason has been quite the disaster on the injury front, and will leave huge holes to fill in particularly St Kilda’s midfield. It is the inactive list for 2022 that would be leaving Saints fans feeling a bit concerned.

On it is Price, who only just got drafted as a rookie and has done a hip injury, and young star Tyanna Smith, who has done an ACL injury.

Then there’s Georgia Patrikios. Now at the time of writing she is not officially on St Kilda’s inactive list, but it may only be a matter of time before she is due to issues with her vaccine status and the AFL Women’s mandatory vaccination policy.

With both Smith and potentially Patrikios out of that midfield, that is one big hole coach Dal Santo is going to have to fill, so it is going to be up to the likes of Molly McDonald to step up and fill the whole. Despite this, it is not all doom and gloom at Saints land.

The likes of Bianca Jakobsson, Kate McCarthy, Nat Exon, Kate Shierlaw and many others are still there, and if they are playing at their best can make life very difficult for the opposition.

The way that St Kilda go against Richmond in round one may ultimately be a good indicator of how the rest of their season will go. Perform well here, and they may just prove some doubters wrong this season.