Young Eagles given chance to fly in 2022 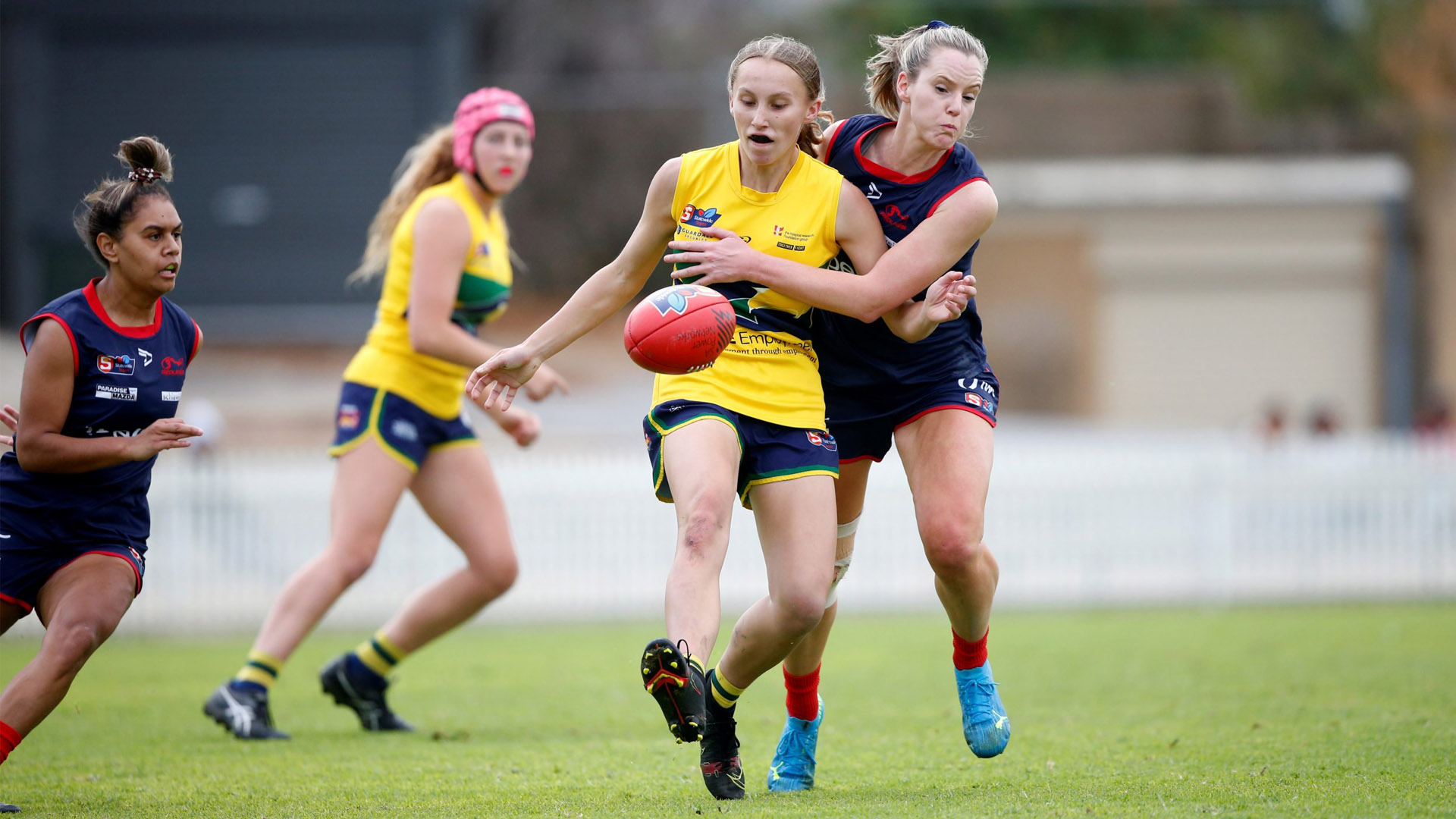 BOASTING an impressive amount of youth prospects, Woodville-West Torrens Women’s will be a side to watch in 2022. Last year’s South Australian National Football League (SANFL) Women’s wooden spooners – their second in their three-year existence – showed plenty of signs to suggest they are headed in the right direction. Under new coach Narelle Smith, the Eagles have recruited a host of AFL Women’s experienced players to support the high volume of young talents.

“I suppose you’re always going to be looking for experienced players to actually tune up the talent that already lies there,” Smith said. “I made a commitment to the board when I was interviewed for the role that I didn’t want to throw the baby out with the bathwater and made sure we were committed to the players already in the program. “We’ve made a few list changes, but I think we’ve added more, and I’ve had a really big focus on looking at the younger players who are already playing in the Talent Shield program.”

Discovering players such as Grace Martin (15-years-old) and Kayleigh May (16), Smith said there were plenty of “little gems” who had been training hard over the off-season. Alongside the likes of Astrid Gooley, Marlie Fiegert, and sisters Jemma and Chloe Whitington-Charity, the standout prospect is AFLW Academy member Shineah Goody.

“There’s no secret that she’s (Goody) probably one of ours that will play AFLW,” Smith said. “I think she’s got enough talent just without even being in an elite program, to be able to take that next step, so that will be fantastic to watch. “With my experience with being in the Crows and working down at Glenelg in the men’s program, I think we’ve set up a really good base for those kids to actually understand the next level and then they’ll be ready for the next level when that comes along.”

SETTLING INTO THE CLUB

Having taken over from Tess Baxter over the off-season, Smith said she was thrilled with the support and the Eagles as a whole. From an administrative point of view, Smith described her transition into the senior coaching role as “seamless”.

“The Eagles are a very well-structured club from the board all the way through to footy ops,” she said. That side of it has been actually quite seamless. Setting up not a new program, but it’s certainly had a bit of remodel if I can describe it that way. “There’s a few things I wanted to bring in that they hadn’t previously had for the girls. “But that side of it’s been really great. “You’ve got an amazing president, CEO and I’ve been working really closely with Matthew Goldsworthy who’s footy operations manager and he’s just a dream to work with.”

Having been an onlooker for the club through her various roles with the Crows, and SANFL Women’s League, Smith said the playing group had been just as she has expected.

“They were pretty much exactly how I thought they would be, super hard workers,” Smith said. “They’ve had a really good preseason in the some athletic profile building stakes. “They’ve worked really hard with our high performance guys down there at the Eagles. I think it’s just a matter of now getting them a little bit of belief that they actually belong.”

Having recruited the likes of Leah Kaslar, Renee Forth and Jordann Hickey alongside the recently Crows-listed McKenzie Dowrick and recent West Australian Under 19s co-captain Brianna Hyde, the Eagles have bolstered their talent and experience over the off-season in a bid to rise up the ladder. In 2022, the SANFL Women’s has included a Development League which will allow teams to field reserves sides on the same matchday, and aide with team selection. This is particularly insightful for the large amount of young players trying to crack into the senior Eagles side.

“They’ll get to cut their teeth with the bigger bodies and we can really test them to see if they are ready and if I refer to say Grace Martin who’s really been a standout in our juniors that have come through. We’ve thrown everything at her, and she’s one that we kind of flagged that might play some development games, and now she pushes herself forward to be playing League,” Smith said.

“It’s fantastic to see, because unless you put them in that program and put them through their paces, you don’t actually know what they’re capable of, and she’s my greatest example of if you give them an opportunity and let them get amongst some high calibre in Leah Kaslar, Renee Forth, Jordynn Hickey who have all been through the system, then they can all push themselves and understand what it takes to take that next step.”

Another change is the 16-a-side rule which the SANFL Women’s has adopted from the elite level. Though not entirely convinced when it first came out, Smith said she “really loved” the 16-a-side setup for the women.

“I think it gives them a chance to be able to kick the ball to space, less stoppages, and I really embrace it now and go ‘yeah I think it could be for both the men and the women at some point’ but it makes the game open and faster,” Smith said.

The Eagles won three consecutive games in 2021, but that was all they managed as they sunk to the wooden spoon. Though showing glimpses, they could not quite get everything right last season. Smith has adopted more of a possession game, which focuses to being competitive at contests in order to stay in matches longer.

“We had a hitout against Glenelg a couple of weeks ago and played down at Ottaway which is a bit of a smaller deck, which suited the side to be able to play the way we want to play which is basically controlling a little bit more of the space rather than everyone collapsing to contests and having a lot of density and numbers around the ball. We want to open it up so when we win it offensively, we can actually move the ball.

“But then we played up in Darwin and struggled a little bit on the larger deck, and fell into some old habits, so we’ll reassess that and we’re just going to really work hard to chase ourselves hard in front and behind the ball and see if we can get some connections going between the lines.”

Smith said despite the lob-sided scoreline – the Norther Territory Football League (NTFL) representative side won 11.7 (73) to Eagles’ 0.2 (2) – she was pleased with the team’s endeavour.

“They never put their heads down and they just played the whole game out, so that’s probably what I’m looking for, is to build that resilience in the squad to be able to go ‘okay we might not win this game, but we’re not just going to lie down and have 10 goals kicked on us in a quarter’ so I’ve already seen the little flashes with that with the immense pressure they were under against the Northern Territory rep side, so I feel like that we’ll get better and better in that space.

The opening match against Sturt is just six days away and whilst the side is ready to hit the ground running, Smith admitted the season would be full of challenges with COVID-19 protocols in place.

“We’ve got a few COVID challenges, I think all the clubs do at the moment,” Smith said. “That’s one of the things the development squad puts a little bit of pressure on, you need to have 42 fit players to field two teams, so we’ve got a little bit of pressure in that space. “I imagine that we want to be known as a more coordinated, contested side, and that’s what I’m expecting against Sturt, is that we really want to be competitive in the contest space, so hopefully we’ve done enough to get them in that mindset.”

The Eagles take on Sturt next Saturday afternoon at Hisense Stadium. Smith and her Eagles will be ones to watch out for in 2022 as the youth looks to fly high.