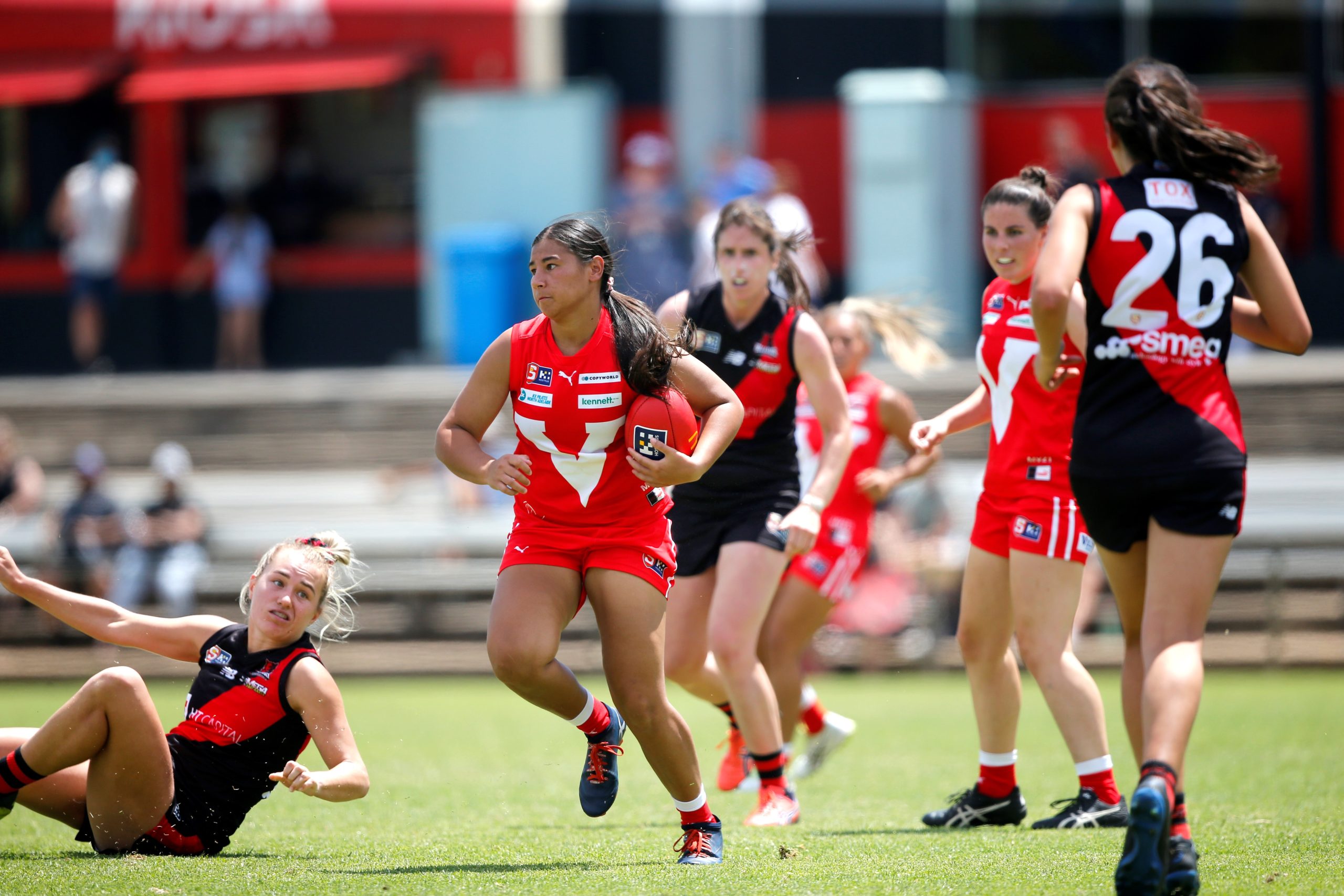 ONE of the highly touted AFLW Draft prospects coming into the year, North Adelaide‘s Hannah Ewings, wasted no time starting her 2022 season on a high. The Roosters teenager had a line put through her 2021 season after injuring her ankle in Round 3 of the South Australian National Football League (SANFL) Women’s competition. That injury not only ruled her out of state league competition, but national representation as well, and Ewings had to watch on as her South Australian teammates competed at the AFL Women’s Under 19 Championships.

After a big preseason, Ewings has returned to the SANFL Women’s, and had a big day out in Round 1 against West Adelaide. Though not getting the win, the midfielder-forward almost helped drag her team over the line in the fourth quarter against Westies, justifying coach Krissie Steen‘s preseason declaration that Ewings would be a “huge inclusion”.

“Her skills are classy, her football brain, her ability to make decisions under pressure, she operates at a different level,” Steen told Rookie Me Central. “When she gets the football it’s like time and space stops, so I think she’s going to have a great season and she’s working really hard and that’s a great thing for us and a great thing for her and she wants to put in a good year at SANFL before she trots off to the AFL.”

ROUND 1 VS WEST ADELAIDE:

Hannah Ewings won Breakthrough Player of the Year honours in 2020, played in a premiership and earned SANFL Women’s Team of the Year representation as well.

Ewings’ return to the SANFL Women’s started slowly, but due to no fault of her own. She started inside 50, and the Westies were doing all the attacking. When down by 16 points, Ewings moved into the midfield, and whilst she was immediately tackled first chance she went near it, she began settling in and immediately got back up to the pace. She received the ball in the middle, took a bounce streaming forward. She also won a free kick at ground level after being first to it, then hit a teammate perfectly at half-forward.

The second quarter Ewings started at the centre bounce, and she had the first kick under pressure on her non-preferred left going inside 50. Though not as potent as her right, it was still effective enough, and soon she started pulling out the party tricks. Ewings won the ball at a stoppage, spun out of trouble, fended off an opponent and got the handball away. Though her next attempted kick was smothered, she soon found the ball at ground level, cleanly picked it up and got it forward.

Midway through the quarter, Ewings had a clean pick up off the deck, evaded an opponent with pure power, and shook off the would-be-tackler to kick down the ground. She won another free kick on the wing and was able to put the ball forward, then when she went inside 50 she managed to win it in congestion and snap. Though it would bounce the wrong side of the post, she was having an impact.

Starting onball yet again, Ewings took a big mark at the top of 50, turned around and slammed it to the danger zone. North was able to generate a scoring opportunity out of it, but just one behind. She then spent time forward but again with West Adelaide regaining the ascendancy, Ewings was thrown back into the midfield when her team was 22 points down following three consecutive goals from Westies. She missed a rare short target by foot, but followed up with a good tackle. Then in the 17th minute, Ewings showed off her evasion with a sidestep one way, then the other, and somehow managed to, whilst backing back, calmly put boot to ball and hit a target under pressure.

With the team down on the scoreboard, coach Steen sent Ewings to full-forward one-on-one to see if the teenager could make a difference. She had an early chance but could not quite get boot to ball, with another defender coming over to assist Ewings’ opponent. In the eighth minute, Ewings used her trademark sidestep oneway and then the other to get free from a stoppage and hit a target amongst multiple defenders. A minute later, she ran onto a loose ball, picked it up, and off a couple of steps slammed home a goal from 40m out.

The time was ticking down, and Ewings had a visible moment of frustration about a minute later where she won the free from a last-touch rule, looked for leads inside 50, and when none came she went to put it long inside 50. In her attempts to get more distance on the kick – she was outside 50 – she ran into the player on the mark and the ball was smothered out of bounds.

That frustration would not last any longer though, because she would continue to look dangerous inside 50, laying a great tackle and wrestling the ball free to handball to a teammate in the clear. At the 15-minute mark, Ewings gave her team a real chance by intercepting a ball from the kickout and putting it straight over the goal umpires head. Her second goal drew the margin back to a straight kick. She worked back hard to win the ball on the defensive side of the centre in the final minutes, and though North Adelaide was attacking, the Roosters just ran out of time.

Hannah Ewings had a terrific first up game, but not overly surprising credit to her high standards. The Rooster is among the top young talents in the country and it is easy to see why. With few flaws, it is just about getting the continuity back into her game after missing almost a full season of football. As a player, Ewings can be damaging in the middle or up forward, and there will be plenty more impressive games throughout 2022 for the talented teenager.