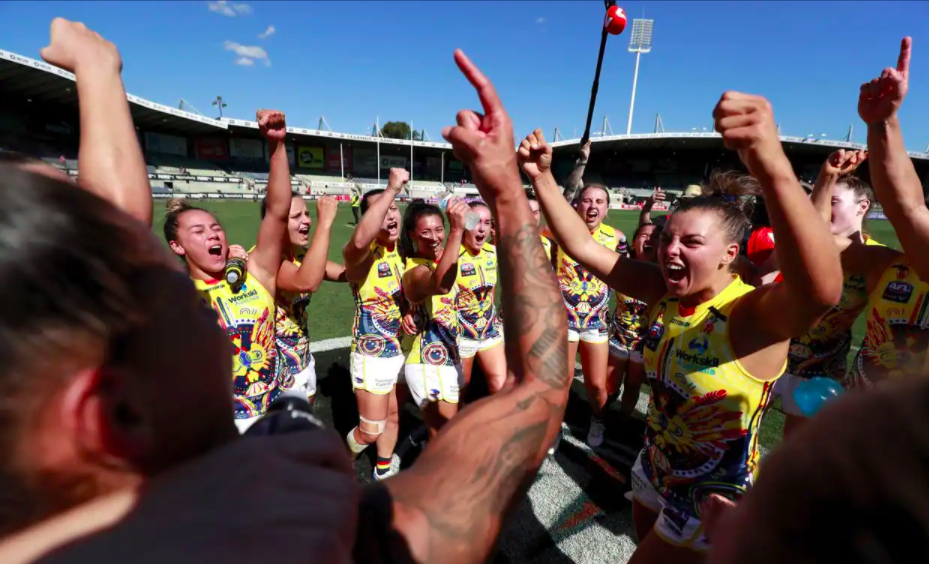 ALBEIT stunted, the 2022 AFL Women’s postseason has quickly progressed to the preliminary final stage, with two mouth-watering matches on Saturday set to decide this year’s grand finalists. It readies as a historic weekend, with Melbourne and Brisbane doing battle in the competition’s first fixture at the MCG, before Adelaide hosts Fremantle at Adelaide Oval. We preview both bouts.

History will be made on Saturday afternoon, as Melbourne and Brisbane do battle in the first ever AFL Women’s match at the MCG. The match is also Melbourne’s 50th in the competition. Having finished equal-top with just one loss on their record, the Demons take on the third-ranked Lions after the latter trounced Collingwood to the tune of 50 points last Sunday, to keep their premiership defence rolling.

Though the honour of playing on the hallowed MCG turf will buoy Melbourne fans and players alike, it could turn out to be somewhat of a home ground disadvantage. Having made Casey Fields a fortress, the swirling breeze and mammoth grandstands at the home of footy pose a much different proposition to what the Dees take full toll with in their usual open arena.

Melbourne also comes in off an extended break, having last played on March 12 in a one-point win over Carlton. Brisbane has endured an interrupted finals run too, but at least got a competitive game under its belt last week – and a confidence boosting one at that. The Lions’ scoring rate has lifted to an average of 67 points in their last six outings, as they look to time their run to the big dance once again.

Both sides are capable of playing fast, attacking footy. Melbourne likes to possess the ball out of defence before jetting off through the corridor, while Brisbane can feast on the contested ball but just as easily create a slingshot style with its speed in transition. Either way, and weather conditions permitting, we should be in for a high quality and quick contest.

The last time these two sides met was in Round 7 this season, when Melbourne snuck home with a three-point win at Metricon Stadium. There was high drama as the Dees clawed their way back from deficits at all three breaks, and Greta Bodey could not quite will her shot over the line after the siren. Former-Lion Tayla Harris also went bananas, feasting on a smaller Brisbane backline to clunk seven contested marks.

In terms of team selection, Melbourne should be raring to go after an elongated break. 11 Demons ran out this past weekend in the VFLW anyway, but older legs were rested. Importantly, Eden Zanker looks likely to get up despite a quad complaint. For the Lions, Ruby Svarc successfully saw a one-game suspension overturned, and sister Cathy will likely play a key tagging role in midfield.

Three weeks since its last outing, minor premier Adelaide will finally enter the finals fold when Fremantle rolls into town for an exciting preliminary final match-up on Saturday afternoon. Much like Melbourne, the Crows will trade their Norwood Oval fortress for the more accomodating Adelaide Oval expanses, but have a red-hot Dockers outfit to content with.

The visitors have won by an average of 37.5 points in their last two outings, including last week’s crushing qualifying final win over North Melbourne. Saturday will make for new ground though, given the Dockers have never played at Adelaide Oval. On the other hand, Adelaide’s 69 per cent winning rate in South Australia makes for ominous reading, especially after claiming its third minor premiership.

Looking at how either side play, this may well be a case of a couple of heavyweights going blow for blow. Adelaide is largely a turnover side, which likes to control the ball with outside run going the other way. While the Crows lay claim to league leading goalkicker Ashleigh Woodland, their conversion rate has let them down at times in front of goal, and Fremantle is a side which can make them pay.

While the Dockers thrive on the contest with revered pressure and tackling numbers, they also have enough speed and x-factor in the front half to score quickly. With game breakers like Ebony Antonio and Gemma Houghton near-impossible to tie down for four quarters, Fremantle is capable of absorbing heat before slingshotting into its own period of dominance.

These two sides previously met in Round 8 of this season, with Adelaide claiming a nine-point road win. On that day, the Crows were able to control possession well and notched 43 inside 50s to Fremantle’s 16, which also lead to 12 marks inside 50. Fremantle brought its tackling game though, laying 72 to Adelaide’s 38. Expect more of the same as their contrasting styles clash.

As we have seen throughout the season, this game will bring about a few important player milestones. Fremantle skipper Hayley Miller will play her 50th AFLW game, along with Crows Sarah Allan and Stevie-Lee Thompson. All three will hope to celebrate by earning the chance to claim ultimate glory next week.