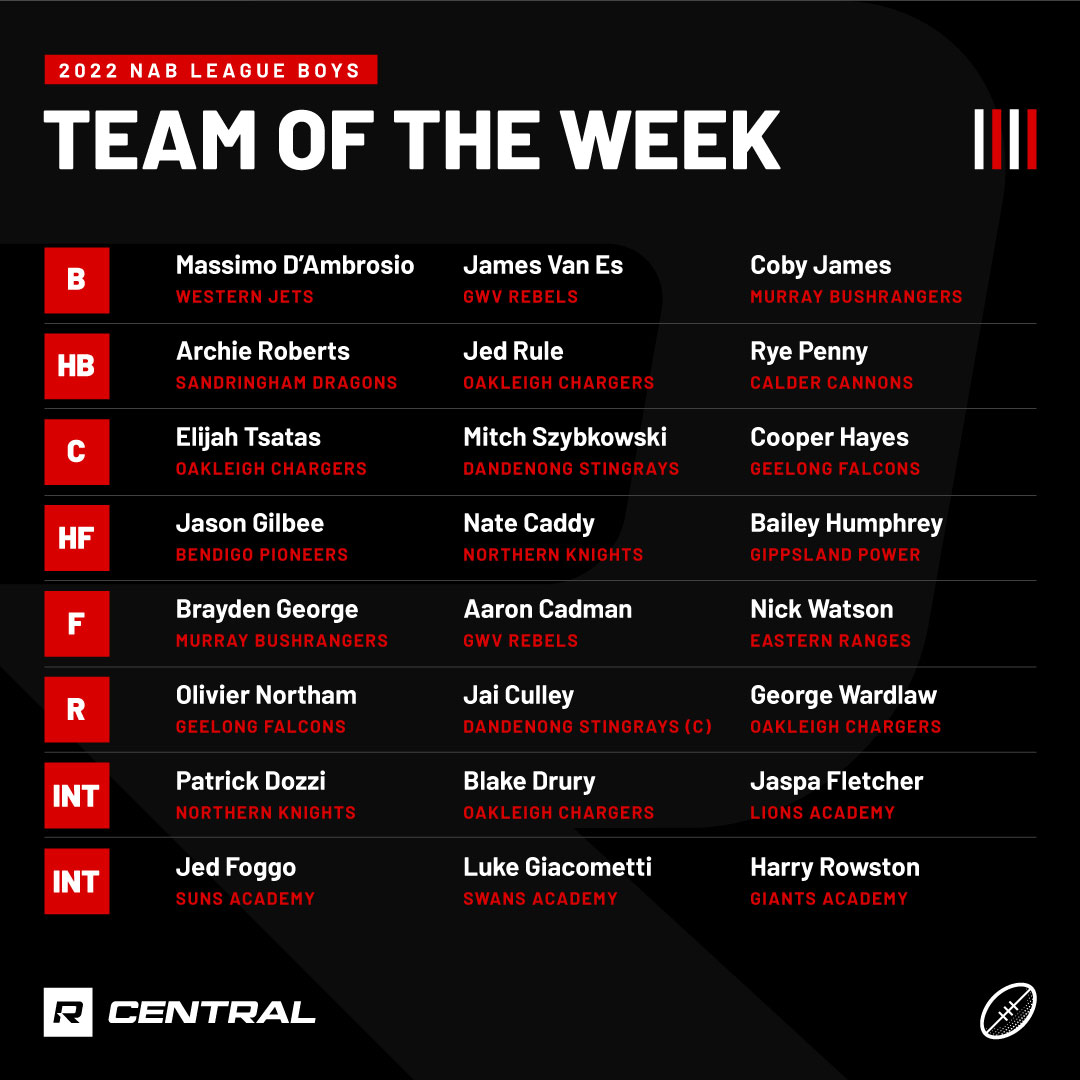 SIX regions lay claim to multiple players in the Rookie Me Central NAB League Boys Team of the Week for Round 1. Among them, it is no surprise to see the Oakleigh Chargers contribute a high of four players to the squad after their blockbuster win over rival, Sandringham on Sunday afternoon. Check out the full 24-player squad, and three emergencies, below.

In a competitive week, Jai Culley put his name in lights as the Dandenong Stingrays beat Eastern by 14 points. One of two ‘Rays in the side, Culley slots into the centre bounce mix after booting three goals from 27 touches in an ominous start to the season. Should he maintain his form, the over-ager could be a good fit at the mid-season draft given his noted improvement over the last year or so.

There is a good mix of talent across the backline, featuring a couple of running smalls in the pockets and genuine intercept marking ability. In the key position posts, GWV’s James Van Es holds down the fort after a composed outing against Bendigo, while Oakleigh over-ager Jed Rule was difficult to look past after his 11-mark effort.

Calder surprise packet Rye Penny took the same number of grabs in his side’s narrow win, while Western skipper Massimo D’Ambrosio defied his size to fly for plenty of his own. Round out the back six are a couple of impressive bottom-agers, in Sandringham’s Archie Roberts and Murray’s Coby James, who both stood up in tough losses.

A stacked midfield is lead by Culley, who takes his place at the centre bounces alongside teammate Mitch Szybkowski and Oakleigh standout George Wardlaw. The latter’s teammate and fellow pick one contender Elijah Tsatas slots in on a wing, opposite Geelong’s Cooper Hayes after his game-turning final term efforts for the Falcons.

Bringing the midfield bunch together is another Falcon, and this week’s ruck in Olivier Northam. At 195cm, he dominated the hitouts with 34 and hit the scoreboard in his short stints up forward with two goals, while also providing a strong marking presence around the ground.

There were plenty of goalkickers to choose from this week, so a good bunch of scorers find themselves unlucky to miss out. Of those who earned their place, Murray’s Brayden George kicked the most majors with five to slot into a pocket alongside bottom-age Eastern pocket rocket Nick Watson.

A certain academy feel fills the interchange bench this week, with a standout player from each region making the cut despite all playing in losses. Brisbane father-son candidate Jaspa Fletcher is among them, with Gold Coast defender Jed Foggo another worthy selection alongside Sydney’s Luke Giacometti and GWS’s Harry Rowston.

From the mainstay clubs, Knights ball winner Patrick Dozzi thrived on a new inside role in his first over-age outing, while Oakleigh small Blake Drury can count himself unlucky not to have made the starting side. With their inclusions, Lachlan Benton, Ted Clohesy, and Jack Newitt were squeezed out of a very competitive 24-man squad.

ROOKIE ME CENTRAL NAB LEAGUE BOYS TEAM OF THE WEEK: ROUND 1