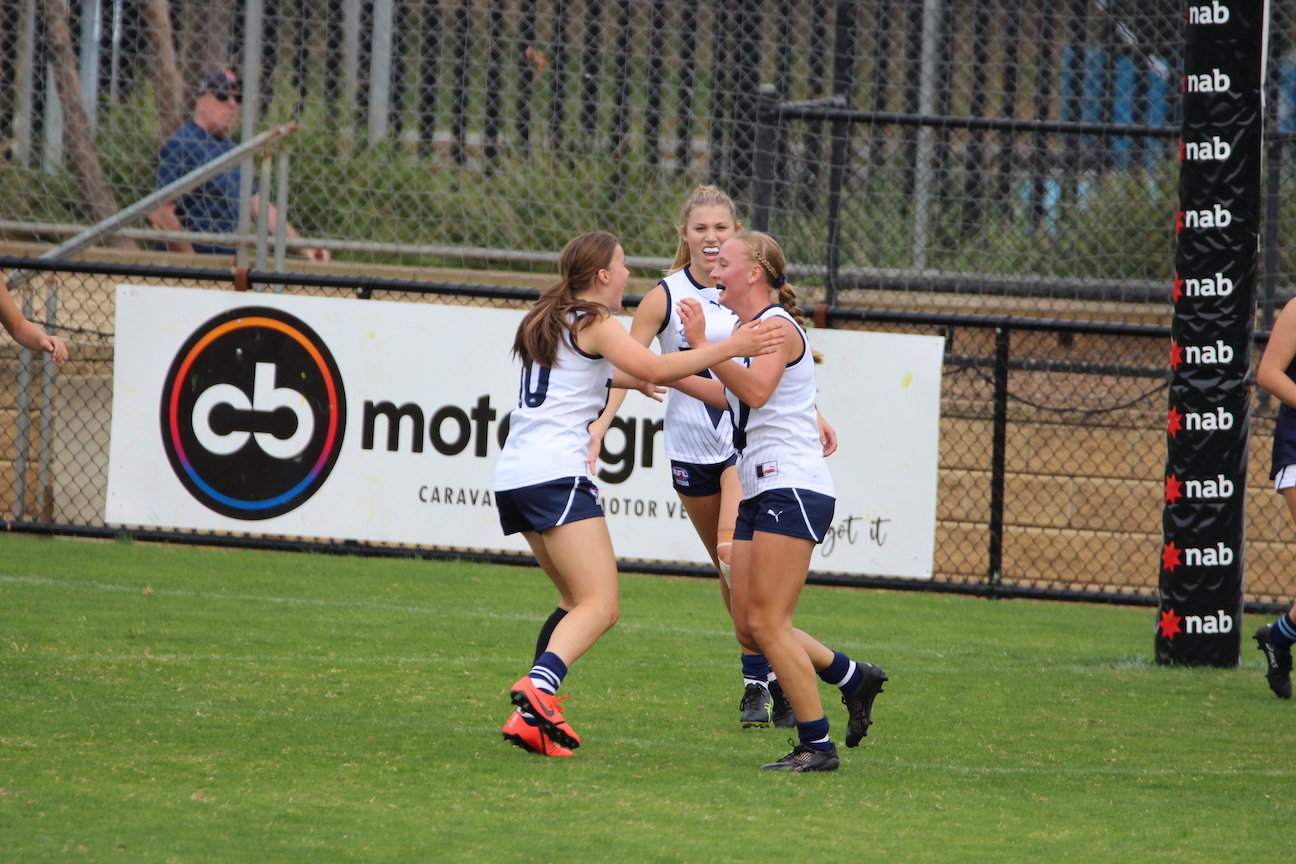 VIC COUNTRY got the better of their Metro rivals in the second AFLW Under 16s Championships clash between the sides. Country flew out of the blocks with some inaccuracy potentially hurting them when Metro managed to work their way into the game. Any worries about that inaccuracies coming back to hurt Country was soon snuffed out in the third term when they piled on five unanswered goals to blow the lead out to 50 points by the final change. Though the last term was again more competitive, Country still won by 39 points, 11.8 (74) to 5.5 (35).

After an impressive game one, Lucia Painter had a match to remember, beginning with the first inside 50 of the game. Sara Howley was also lively in the opening few minutes, with her Geelong Falcons teammate Mekah Morrissy snapping towards goal but just hitting the post. Soon some Ash Centra magic saw the Gippsland Power talent on the board. Kyla Forbes had Metro’s first genuine chance up the other end but just missed, with Jemma Reynolds finding it early and getting it forward to Mikayla Williamson to get on the end of one.

When Jemmika Douglas cleanly picked it up inside 50 and snapped around her body with class for Country’s third major, the danger signs were there. Kiara Woods almost made it four with a shot from 15m but just shanked the kick at the last moment, before Alexis Gregor stretched the lead out to 26 points. A late Metro surge saw Judie Goldman put her side on the board before quarter time, soccering through a goal in the final minute, for the lead to be cut to 19 points at the first break.

After being on the back foot for most of the first quarter – and arguably could have been further down than 19 points – Metro started strong with the first inside 50 leading to Suwindi Buckley putting through a behind. Painter picked up where she left off, with Country teammate and GWV Rebels midfielder Jessica Rentsch also eye-catching through the middle. Western Jets premiership player Sierra Grieves was finding plenty of the ball, whilst Maggie Mahony and Chloe Baker-West combined to set up Forbes to cut the deficit to 12 points at the 10-minute mark of the second term.

That would prove to be a mirage however, as Country would kick the next 6.3 before Metro would score again. Douglass would soccer through her second goal of the day to extend the lead to 18 points at the main break, before the onslaught started in the premiership quarter. Howley made the most of a turnover to put on the jets and slam one home, with Painter taking one of many contested marks to make no mistake from 20m out. The trend would continue with the likes of Chloe Walker, captain Chloe Adams and Centra all slotting majors. Remarkably, Country had more shots that were touched on the line, and despite the best efforts of Metro defenders such as Sarah Poustie laying a goal-saving tackle, it would not be enough and the lead ballooned out to 50 points.

Unfortunately Centra came off sore right at the end of the third term and would take no further part, but the job was done with Country able to celebrate another win. To Metro’s credit, they won the last term, as Sienna Tallariti found Georgia Knight in the goalsquare, and then Kristie-Lee Weston-Turner got on the board. A few seconds after the siren was expected to go, Baker-West slammed home a major for Metro to make the final margin 39 points, with Howley the only Vic Country goalkicker.

For Metro, Baker-West had another big day out with 23 disposals, two marks, six tackles, six clearances, three inside 50s, three rebounds and a goal, sharing the bests with Forbes (18 disposals, four marks, five tackles, four clearances, two inside 50s and a goal). Grieves (18 disposals, three tackles, two clearances and two rebound 50s) found plenty of it, whilst Tiger Doultree (17 disposals, three marks and six rebound 50s) was the standout defender. Tallariti and Mahony were also among the clear bests for the losing side.