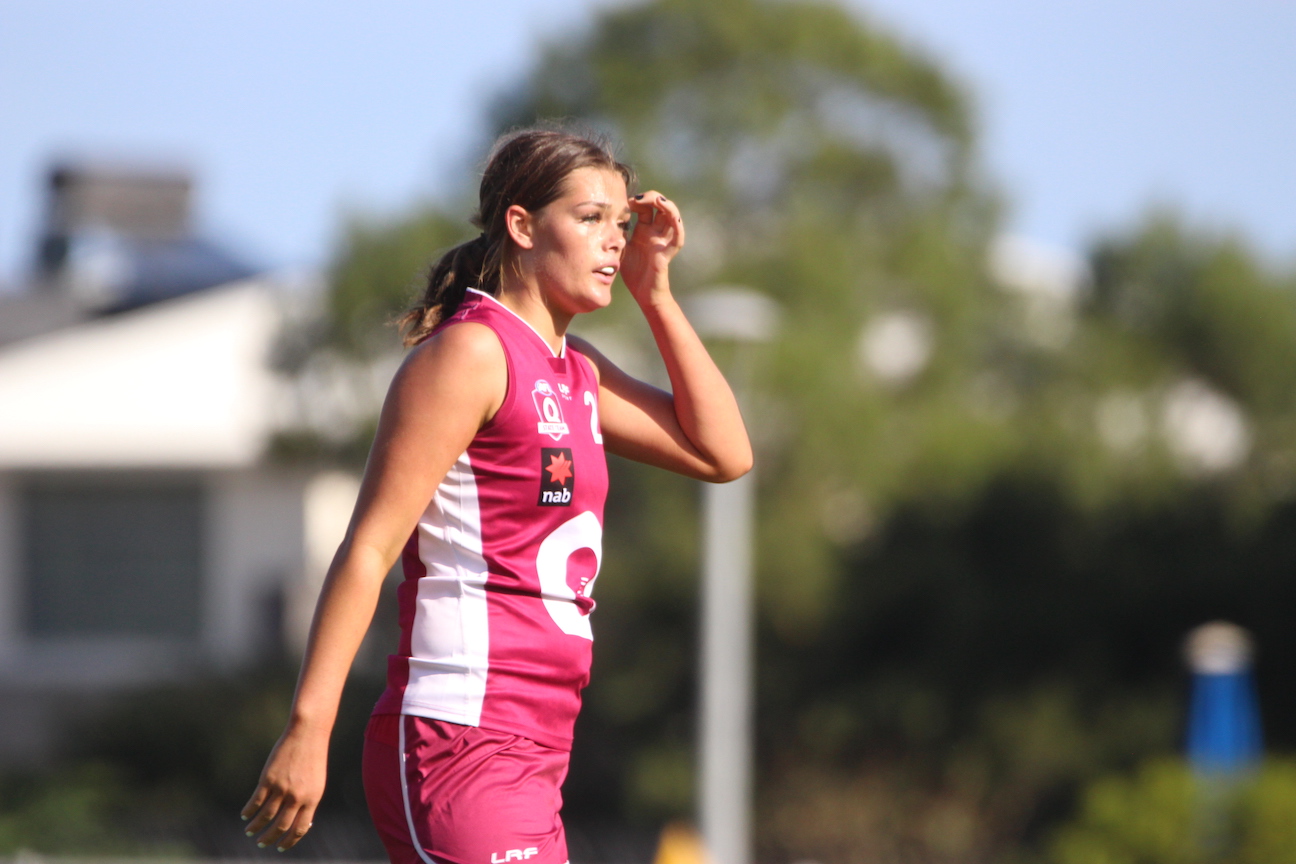 GENUINE key position talent has proven a rare commodity in the fledgling AFL Women’s space, but there are a few to monitor as attention turns to this year’s draft cohort. Gold Coast Suns Academy member Fleur Davies is one, a 181cm ruck-forward with mobility and endurance which defy her size. She has a handy template in place too.

Sister of current AFLW Sun, Giselle, Davies grew up in a competitive sporting set of siblings, and is taking a similar path to her elder example. From touch footy and netball, to entering the Gold Coast Academy and representing her state, the soon to be 18-year-old says it’s a “bonus” having her sister’s journey to follow.

“I have four sisters, so we’ve all been together in the backyard, it’s always been a massive competition,” Davies told Rookie Me Central after Queensland’s AFLW Under 18s clash with Vic Metro. “We’re all obviously similar sizes so it’s always been quite even.

“Having Giselle, especially going through the pathway before me is just a great visual, so I can see it. “It’s a great example for me to look into, to look at what she’s done, what she has to do and how she’s getting there. “It’s a bonus having that in my corner.”

Davies and her Maroons tasted success last Friday, and exacted some form of revenge on Victoria’s crop by downing Vic Country. They still have one more game to cap off their carnival as the Allies come to town on Saturday. After that, Davies will represent the AFLW Academy in an annual showcase of the nation’s brightest future stars.

Keen to embrace the next “super exciting” opportunity, Davies says she is also grateful for being able to represent her state, something that is “quite special” given how few players are given the chance to do so, and how close the bond between her teammates has been.

Looking towards the conclusion of her top-age campaign, the Suns Academy product is clear on what she can potentially bring to an AFLW list, and has her sights set firmly on displaying her greatest strengths to everyone who bares witness.

“Obviously I want to get drafted, so that’s my biggest goal,” she said. “I just want to win, to have a good time with my team and do everything I possibly can. I’ll put my best foot forward and make sure I’m showing everyone what I’m capable of.

“I think my strengths would be my overhead marking. “I’ve been working on it a lot and you can tell. “Also, my goalkicking is normally what I go to, but I’ve been playing more ruck this year than forward so hopefully I can still bring that in my game.”

With no draft day in sight as of yet, Davies’ nomination decision remains open, though many other Queenslanders have already expressed their desire to remain in the Sunshine State.

De Melo the journeywoman grateful to be back at the top

PORT Adelaide’s Jade De Melo has had quite the journey to get to where she is at with the Power, but she is certainly grateful to be in the situation she is in.. The Power is actually her second AFLW club, after briefly spending time on Fremantle’s list in the league’s infancy. Reflecting on her […]