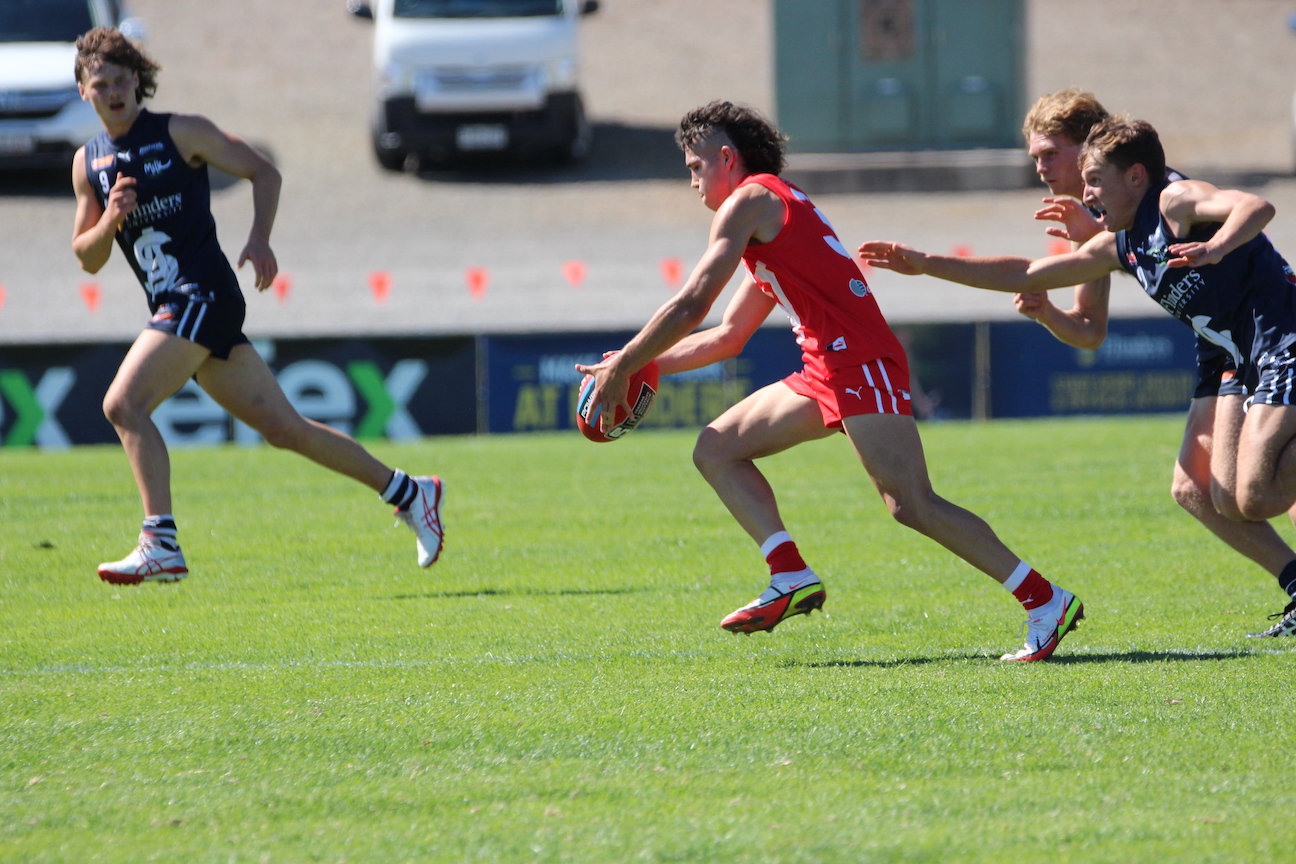 STURT fell a goal short of handing North Adelaide its first loss of the 2022 SANFL Under 18s season, making for an enthralling choice for this week’s match of the round. We noted some of the top performers in that game, before taking a look around the grounds and up the grades.

Dwyer finished as Sturt’s best possession winner in the tough loss to North Adelaide. Hard at the midfield contest all day, Dwyer did blaze away by foot at times but had no problems finding the ball at stoppages or in general play. He ran hard defensively but also pushed forward and dribbled through an important goal in the third term to close the margin to single digits. Dwyer finished with 22 disposals, five marks, four tackles, six clearances and six inside 50s.

Full forward, Reschke finished with another bag of goals as Sturt fell just short of dealing the Roosters their first loss of the season. Operating out of the goalsquare, Reschke provided a strong marking target down the line and proved too strong for the North Adelaide tall defenders. He dribbled through the first goal of the game then launched a long-range set-shot moments later. A genuine presence in the contest with his physical approach and toughness, Reschke frustratingly missed a couple of gettable set-shots, but still managed to finish with four majors from 11 disposals and seven marks (four contested).

Sadler had a quieter day in the Double Blues midfield, with his defensive and contest work doing much of the talking. Sadler was typically impactful around the ball with his tackling intensity shining through. Although he may not have accumulated as much of the ball as many other midfielders around the Under 18 competition, Sadler’s clearance work and impact per possession was of a quality standard. He booted an important goal in the final term, to go with his 17 disposals, six tackles, four inside 50s and four clearances.

Keeler produced a strong game in the ruck for the still-undefeated Roosters. Having split his time between the forward line and ruck in recent weeks, Keeler spent almost the entire game on-ball as he finished with the equal-most possessions on ground. Although his tap-work was handy, so to his ability to take it out of the ruck when necessary, it was Keeler’s follow-up work and productivity in general play which caught the eye. He was able to use his bigger frame to his advantage in congestion, but also had the natural athleticism to evade tacklers and get things moving for the Roosters. His burst of speed around the ball was noticeable. Keeler calmly booted a vital goal as the three-quarter time siren sounded to give his side a boost heading into the final change. Although his foot skills were inconsistent, Keeler was certainly one of the best afield.

South Australian Under 18 state squad member, Bennier spent the day down back and had a couple of nice moments. Although he found himself out-bodied by the physical Chad Reschke on various occasions, Bennier’s intercept marking ability was strong. His rebounding was relentless as he propelled the Sturt attacks then got the ball moving in the direction of the red and white. Clean overhead and assured with his disposal by foot, Bennier finished the day with 17 possessions, four marks and nine rebound 50s.

Dowling had a quieter day at Unley Oval when compared to some of his monstrous performances earlier in the season. He spent some time across half-forward and the midfield where he combined typically well with the likes of Kelsey Rypstra, Max Blacker and James White. Dowling was strong in the contest but also used it fairly well with ball in-hand. His goal in the final term from the goal-line provided North Adelaide with the 15-point buffer which would ultimately see them notch their eighth win from as many games. Dowling finished with 22 disposals, four marks, three tackles and four clearances.

The ever-reliable Blacker returned to the North Adelaide line-up after spending the last couple of weeks with school football commitments to St. Peter’s College. The diminutive forward/midfielder was busy from the get-go, with his natural football smarts ensuring he worked into the right spaces, then used it to the Roosters advantage. His cleanliness proved important as he spent a large proportion of the game across the half-forward flank. Blacker accumulated 22 disposals, three marks, four inside-50s and an ‘out-the-back’ goal at the beginning of the second quarter.

With midfield mainstay Kane McAuliffe tied to college football with Prince Alfred College, Rypstra is one who has certainly benefitted from an increased role. His ability to provide speed and polish whenever he gets the ball provides a meaningful point of difference. This, combined with his seemingly relentless tackling pressure makes Rypstra one of the most important cogs in this impressive North Adelaide side. Although he didn’t get on the scorecard, Rypstra managed an equal-game high 23 disposals, two marks, eight tackles, seven clearances and five inside 50s.

Norwood lead at every change, with Tyson Walls again influential for his 27 disposals and lone goal. Logan Evans was important for the visitors (25 disposals, eight rebound 50s), while Riley Verrall (20 disposals, eight marks) and Alex Van Wyk (17 disposals, 15 hitouts, seven clearances) were some of Norwood’s best. Brayden Rachwal finished with three goals for the Redlegs, who now sit just outside the top four on percentage after the 19-point win.

South Adelaide dominated an undermanned Glenelg side to runaway 12-goal winners at home. After Glenelg kicked the first goal of the game through Ryan Scovell, the Panthers piled on seven without reply. Jaiden Magor‘s second on the stroke of half time gave the home side a 27-point lead going into the main break.

The second half was almost a repeat of the first, with the Tigers getting the first goal through Ethan Murdock, before South piled on another seven unanswered to run away with the game. Magor (41 disposals, nine marks, eight clearances, eight inside 50s, two goals) was easily best on ground. Will Verrall (28 disposals, nine clearances, eight inside 50s) played one of his best games this season, while Koby Cockshell (five goals) and Charlie Duncan (19 disposals, six inside 50s, one goal) were strong contributors.

Without a handful of their stars due to school football commitments, the Tigers were led by Hayden Brokensha who collected 23 disposals to go with seven marks, seven tackles and seven rebound 50’s. Jayden Davis (23 disposals, six marks, five tackles, four clearances, one goal) was one who offered some resistance, while Kalan Shanks (22 disposals) and Eli Redman (20) were some of Glenelg’s better ball winners.

West Adelaide and Woodville-West Torrens battled it out with both sides missing key players, and the Eagles recorded their first win of the season, finishing 10 point winners. Mattaes Phillipou continued to build on his strong season with a dominant display, finishing with 33 possessions, 10 marks, six clearances and three goals.

He was well supported by fellow midfielder Nathan Barkla, who stepped up in the absence of Adam D’Aloia with 28 disposals. Blake Hansen continued to star as one of his sides prime ball-movers, finishing with 22 touches, (19 kicks), seven inside 50s and four rebound 50s.

Up the grades, West Adelaide’s Kobe Ryan was influential in his second SANFL League game. The midfielder finished with 17 disposals and six clearances in a tough loss to Port Adelaide’s reserves side. Speaking of Reserves, Adam Deakin led an under-fire Central District defence, as he consistently worked to repel the opposition’s attack. Deakin finished with 19 disposals (all kicks) and 10 rebound 50s in a 41-point loss to Norwood in the twos.