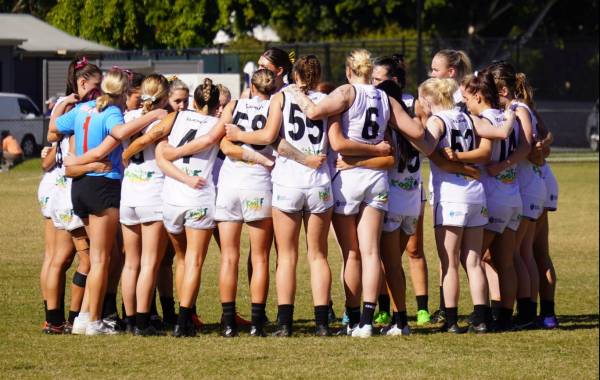 THERE is only one match this weekend in the QAFLW, but it is sure to be a rather entertaining one.

Despite only just playing their Round 8 match last week, they had to catch up due to the weather only last weekend, Bond University and Southport are up against each other again this weekend.

Last weekend down at Bond Uni, the Bull Sharks held the lead at quarter time, but a five goals to none second term from Southport really turned things around for the Sharks, who ultimately went on to win by 33 points.

Southport really solved their ‘What to do with no Brittany Perry?’ problem that seemed to plague them in previous weeks, with the likes of Darcie Davies and Brianna McFarlane both kicking multiple majors.

It was not just on the scoreboard that Southport dominated last week.

They had more touches than Bond Uni (both kicks and handballs), and a whopping 16 more inside 50s than the Bull Sharks did. They also laid 39 more tackles than Bond Uni did.

The QAFLW is now in the final month of its home and away season, so the race for the finals now becomes more exciting and every win becomes more and more crucial.

The Bull Sharks currently sit in fourth, with only percentage separating them from fifth place Coorparoo. Although a win on Saturday will not secure their finals spot, it will certainly makes things a bit safer for them, particularly should they slip up in either of their final two matches.