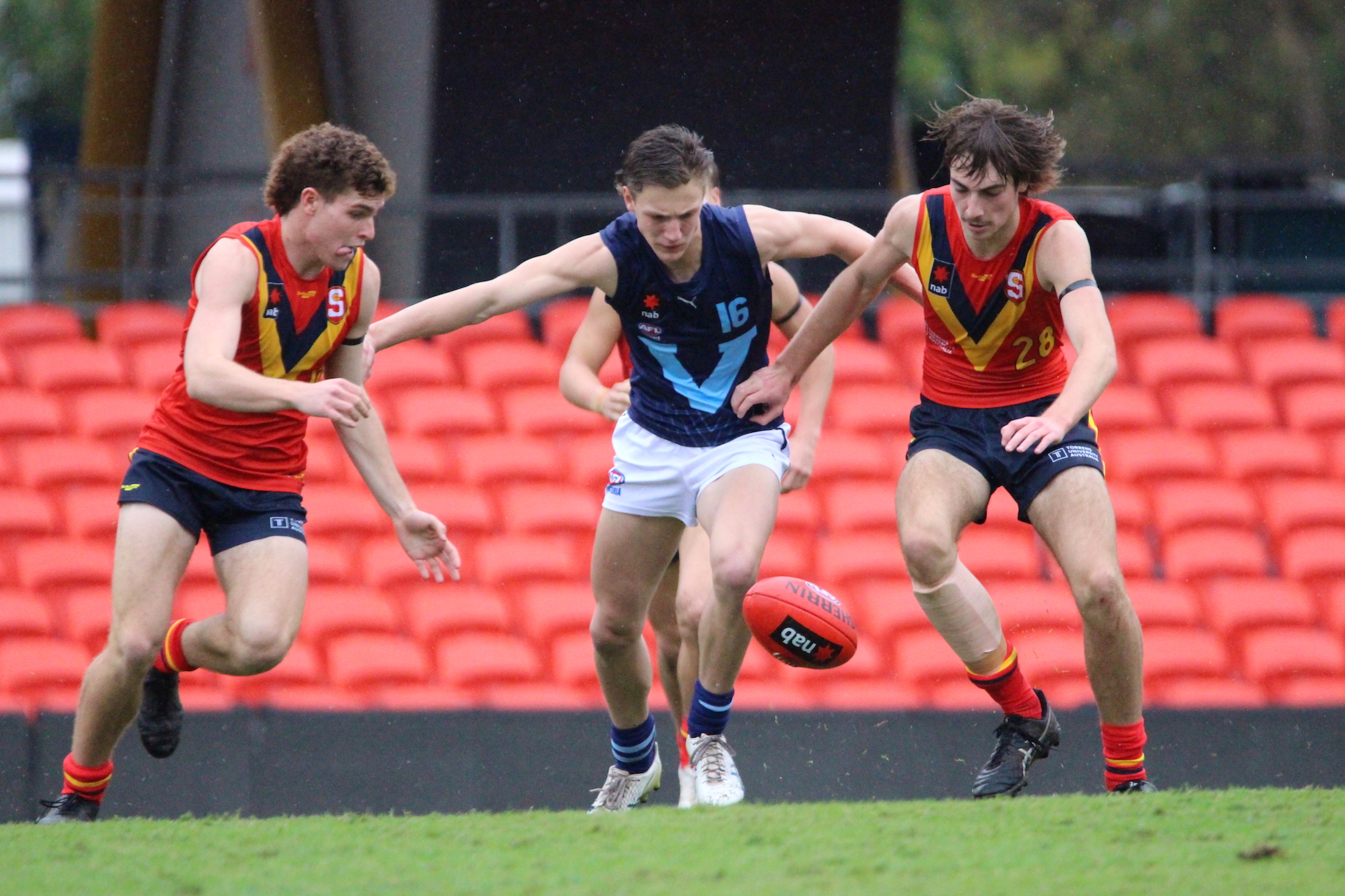 A FIVE-GOAL third term to Vic Metro has seen the ‘Big V’ remain undefeated in the 2022 AFL Under 16 Championships, downing fellow unbeaten side South Australia in a nail-biting three-point result. The Croweaters had the chance to win the game after the siren, with Kade Herbert marking 40m out, but his set shot drifted to the right for one behind. Despite South Australia booting the last three goals of the game, the Croweaters fell short, with Metro holding on, 9.14 (68) to 9.11 (65).

Both teams headed into the clash with a win from their opening Under 16s Championships encounters, with Vic Metro toppling Vic Country, and South Australia getting the better of Western Australia. It was South Australia getting off to the perfect start with a nice hit from bottom-ager Blake Oudshoorn-Bennier who found Beau Ryan for the opening goal of the game. Oudshoorn-Bennier had a big first term having a set shot hitting the post. The impressive Levi Ashcroft and Jagga Smith were doing well for Metro, and their form lead to Christian Moreas getting it off the deck for a goal.

South Australia got back on top through Charlie West who slammed home two goals in the first term, including a nice intercept mark 15m out, while Zak Johnson kicked the first of his three majors. At quarter time the Croweaters lead by five points, with Tyler Welsh looking threatening despite the wet conditions, and Benny Barrett thriving in the conditions. It was the second term where the Croweaters got off to the right start, as Louie Montgomery dribbled home a clever goal, and then Ned Atkinson made no mistake from a set shot. Metro got one back against the flow thanks to a creative tap on from Isaac Kako to set up Johnson for his second. Montgomery kicked his second goal from the goalsquare and South Australia had extended its lead to 13 points at the main break.

Vic Metro had not made the most of its chances in the opening half, booting three goals from 10 shots, while South Australia slotted six from eight. Then came the onslaught. Vic Metro slammed home six consecutive goals over the next 30 minutes to blow the lead right out to beyond four goals. Johnson kicked his third, and Angus Phillips came to life with back-to-back goals, whilst Damon Hollow and Lucas McInerney also kicked majors. The game looked done and dusted when Phillips spun and hit up Kako running into an open goal nine minutes into the final term, but there was another twist in the tale.

South Australia had plenty of chances themselves, with Welsh having a trio of shots on goal but not quite being able to get them through the big sticks thanks to some fantastic defensive work by Tadhg McCarthy and McInerney helping out. Then, just as the game ticked into the final eight minutes, Phoenix Hargrave kicked an important goal, the Croweaters’ first since the second term. Then West followed suit, slotting two more including one on the run under pressure with just two and a half minutes left. Kako returned the favour to Phillips from earlier in the game for the Sandringham Dragons forward to have shot on goal missed in the final 90 seconds.

Needing an end-to-end play, South Australia rushed it down – albeit after a stoppage or two, and the second last kick of the day went to Herbert inside 50 who marked in a contest. He opted to go back for the set shot, needing to kick after the siren from just inside 50. Unfortunately for all their work coming back in the final term, it would not be enough, with the third quarter blitz proving the difference. Vic Metro saluted 9.14 (68) to 9.11 (65) to remain undefeated and head into the final round as favourites for the overall title.

Johnson finished with the three goals, whilst Ashcroft and Kako were particularly creative in the front half. Smith too was lively around the ground, while Jayden Nguyen worked hard up and down the ground. West slotted four goals in the win, combining well with Welsh who was also dangerous inside 50. Dyson Sharp worked hard in the defensive half, while Atkinson and William McCabe were also important for the losers.