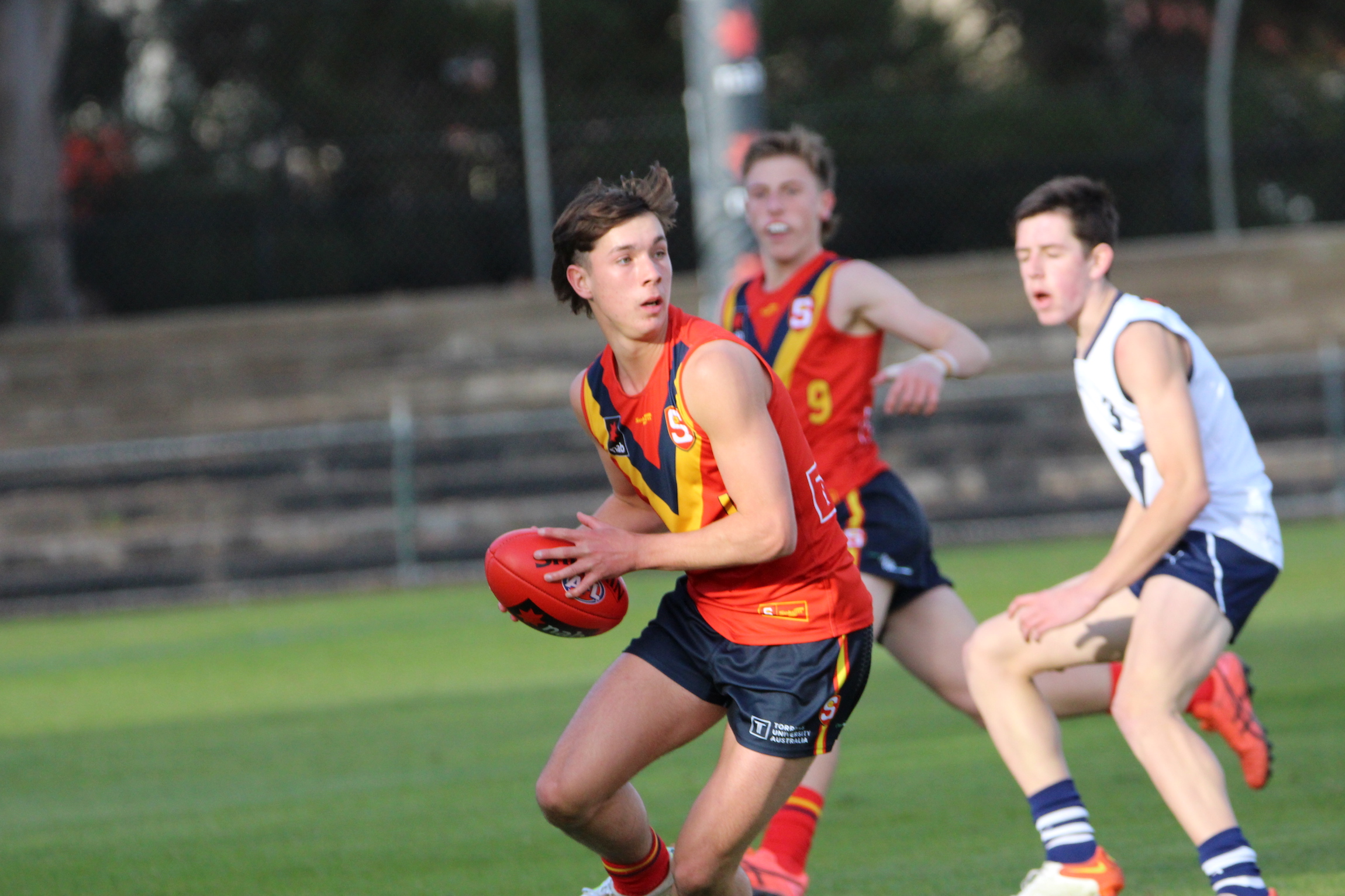 SOUTH Australia has triumphed at the 2022 AFL Under 16 Championships, running out comfortable winners over Vic Country to lift the trophy aloft at Thebarton Oval today. The Croweaters just needed a victory to take out the title, given Western Australia’s win over Vic Metro earlier in the day thanks to the home team’s higher percentage than both those sides with the trio finishing on two wins from three matches. In a commanding effort that perhaps could have been an even larger margin had it not been for inaccuracy, South Australia won 14.15 (99) to 5.6 (36).

In a four-quarter effort, the Croweaters not only won each term on the scoreboard, but also had more forward half possession to throughly deserve the victory. Though they kicked 5.13 over the middle two quarters, the high volume of forward 50 entries eventually won out. Remarkably, the spread of goalkickers was the impressive aspect with 11 individual goalkickers for the game. It all started in an eerily similar fashion to the Metro clash with Blake Oudshorn-Bennier slotting on from range three minutes into the match. The impressive Xavier Ivisic replied with a goal of his own after tucking the ball under his arm, before tall Charlie West converted after the quarter time siren from a downfield free kick.

It had been a real arm-wrestle for the majority of the term, but that late goal separated the sides for the home team to lead by three points at the first break. The second quarter was well and truly on South Australia’s terms, even after Zac McInnes kicked the first goal from a long-range set shot. Finn O’Sullivan looked good across the first 30 minutes, but the South Australian numbers won out and they peppered the goals with repeat entries. Tom Tasker and Louie Montgomery both added their names to the goalkicking list, with Montgomery’s late effort finally giving South Australia some reward for effort. Oudshoorn-Bennier and the Camporeale brothers – Ben and Lucas – were lively, whilst Port Adelaide Next-Generation Academy prospect Benny Barrett found his fair share of the footy.

By half-time, South Australia held a 14-point lead, but with a 2.7 to 2.2 quarter, the lead could, and should have been more. The scoreboard started to tick over more int eh third term even though it was only another goal between the sides. The dangerous Will Thomas kicked the first of his two goals with a nice snap off a long kick from Tyler Welsh to give the home team a buffer. They had a lot of other chances but could not put it through the big sticks as the side missed a number of shots on goal. It threatened to leave them unstuck as Vic Country kept up with them, as O’Sullivan and Oliver Warburton goaling either side of Ned Atkinson‘s important set shot major. Luckily for the home team, Lucas Camporeale made good on a goal with the last kick of the quarter to respond and hand the Croweaters a 26-point lead at three quarter time.

That last goal gave South Australia the momentum and the final term became a stampede. The Croweaters booted four goals in the first 10 minutes as the floodgates opened. Thomas crumbed a great goal to become the first multiple goalkicker in the game, then got one to Alex Dodson in the square for one from point blank range. Bigman PJ Carlin was snapping around his body as it became party time, and Beau Ryan made it a 50-point margin in the blink of an eye. The last 13 minutes was playing time out, but both sides still had a crack, with Max Stobie getting one for the Country side, but South Australia was not going to take the foot off the pedal and Montgomery slammed home a response shortly after. Even a late Welsh shot that sprayed wide could not dampen the home team’s spirits.

By the final siren, South Australia who struggled to find the big sticks in the first three quarters, slotted seven goals in the final term to double their tally and run out dominant victors by 63 points. They handed out the Most Valuable Player (MVP) awards post-game, with Will McCabe awarded as South Australia’s best player across the three games. Vic Country’s O’Sullivan earned his side’s MVP, as well as the Kevin Sheehan Medal for the best player across the tournament.