Round 15 sets up a final round cracker in the QAFLW 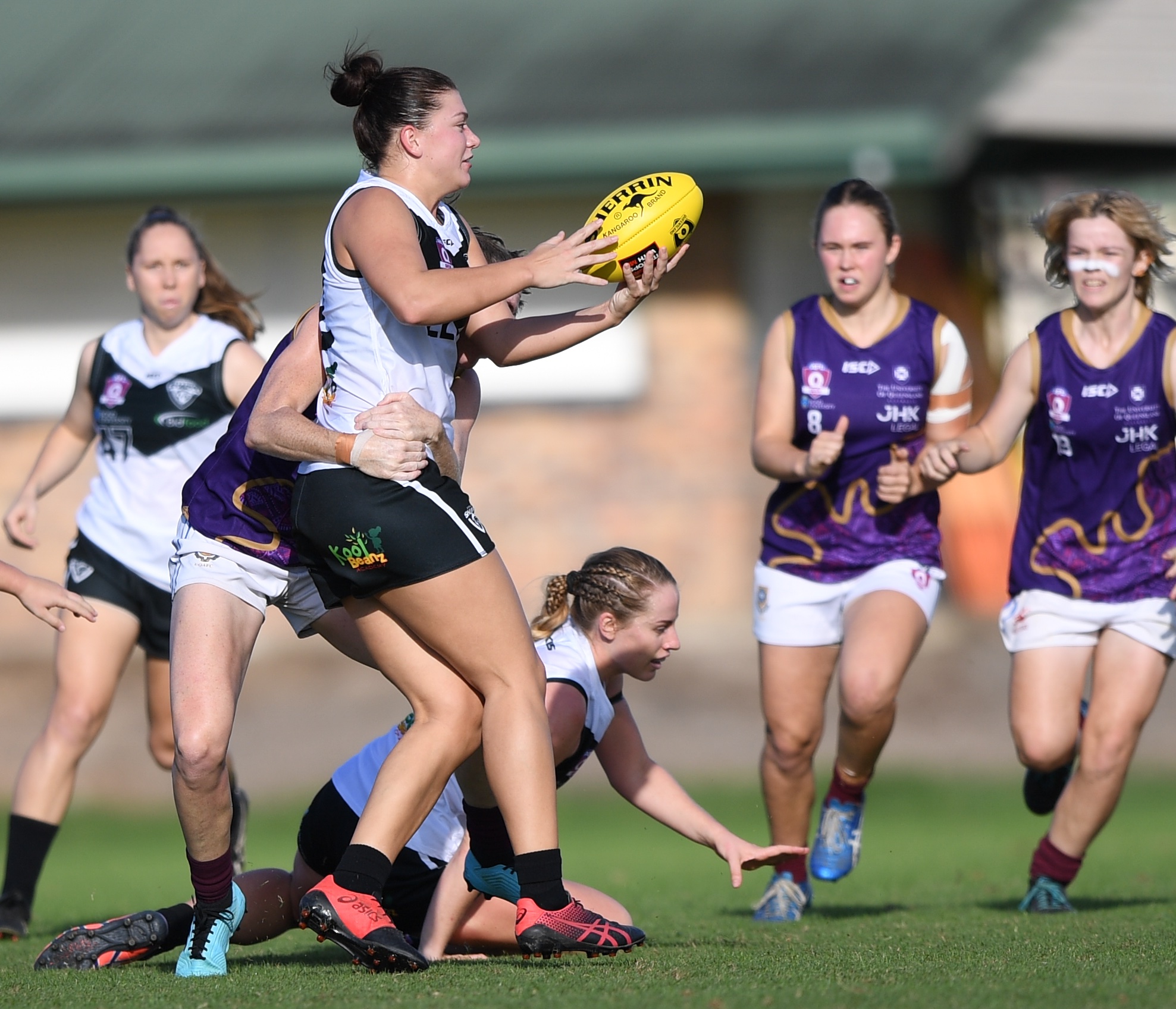 THE penultimate weekend of the 2022 QAFLW season gave fans some results that are sure to set up one final intriguing round of the season next week.

The match of the round was a top two tussle between University of Queensland and Southport, with the Red Lionesses ultimately getting the chocolates by 14 points.

After being down and out at half time, the Red Lionesses rallied and had a stellar second half to take the win.

The match opened at a frenetic pace, that was maintained for much of the opening term.

UQ got the first score of the match on the board, but it was Southport who crucially got the first major of the game after Georgia Eller soccered it through in the goal square.

It was not too long before UQ responded with a snag through Ashanti Jackson, kicked in very similar circumstances up the other end.

Jessica Stallard kicked UQ’s second only minutes later and momentum was certainly with the Red Lionesses.

Southport certainly had their chances to score in the back end of the term but could not convert, so at quarter time they found themselves five points down.

Southport finally got some reward early in the second term with a goal through Brianna McFarlane, and off a sudden the lead was theirs again.

Tayla Gregory booted Southport’s second for the term and momentum had well and truly shifted in the Sharks’ favour.

Selina Priest got Southport’s third on the trot and suddenly Southport had quite a handy lead for themselves.

UQ were the beneficiary of a 50m penalty and responded through Jackson, and the margin was back to seven points.

McFarlane then booted her second of the term as Southport restored their 13-point lead.

However, it only took UQ seconds to respond from the restart at Louise Tyson majored to trim the margin back.

Madeleine Watt got herself on the scoreboard for Southport in the shadows of the half time siren, so at the major break the margin was 13 points in the Sharks’ favour.

Southport had the majority of the ball in the second term, but a couple of silly errors meant the Red Lionesses were certainly not out of the contest.

The third quarter belonged to the home side.

UQ dominated inside 50 time to begin the third term, but their first goal for the quarter was a long time coming. It finally came for them about halfway through the quarter via Stallard, and suddenly the margin was back down to five points.

UQ continued to dominate territory, and finally got some more reward for it a few minutes later when Stephanie O’Brien muscled her way out of a contest to snap a major and give her side the lead.

The ball continued to remain lodged in UQ’s forward 50, and Southport just could not get it past halfway on the way down towards their forward 50.

As the teams turned for home, the margin sat at three points in the home team’s favour, but it was really still anyone’s game.

It was free flowing footy in the final term, but UQ were the first to put a major on the board via Kaitlyn Day.

Southport certainly had their opportunities to take the lead back through much of the final term, but all they could muster for the quarter was a solitary behind.

UQ put one more major on the board via Stallard and the reigning premiers were home.

It was the Hornets who lead at quarter time, but good second and fourth terms from the Bull sharks saw them streak ahead and take the win.

Isabella Iverach top scored for the Bull sharks with two majors, while Teagan Tatlock and Georgia Hutton were among Bond’s best in a crucial win.

Meanwhile for Aspley, Lucy Pengelly, Angela Lingard and Courtney Daniec were among their best in a loss that ended their finals hopes.

The Kings kept the Devils scoreless to half time, and to one goal for the entire second half.

Chelsea Chesterfield, Makeisha Muller and Chelsea Winn all booted majors for the Kings, while Laura Blue and Sally Young were among Coorparoo’s best in the crucial win.

Meanwhile for the Devils, Madison Goodwin was their only goal kicker, while Lucy Bellinger and Ebony Milne both had good games.

The Roos were inaccurate, but it ultimately did not matter as they kept the Gorillas scoreless on the way to an 82 point win.

Mikayla Martin booted four majors for the Roos, while Emma Day snared two of her own.

Meanwhile skipper Mackenzie Findlay, Uma Brennan and Chloe Litherland were among the Gorillas’ best in another tough loss.