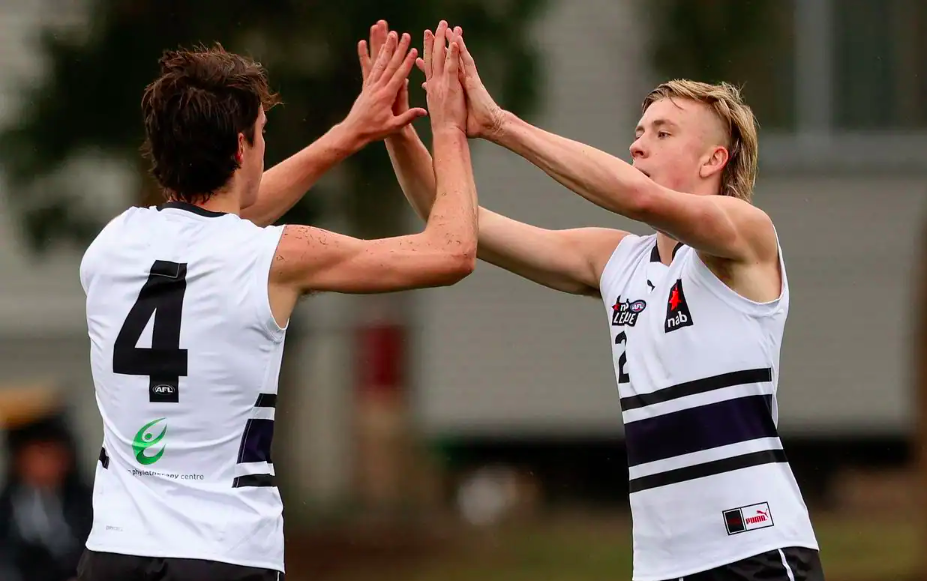 HAILING from strong pedigree as a relative of Richmond premiership player, Josh, Northern Knights forward Nate Caddy is blazing his own trail through the elite talent pathway. Already a Vic Metro Under 18 representative, the bottom-ager has been in promising form throughout his maiden NAB League campaign.

At 190cm, Caddy is a dynamic marking target who presents like a true key position player, but has enough dexterity to impact once the ball hits the deck. Fresh off his outing in the Big V, he returned to Knights colours on Saturday and again hit the scoreboard in his side’s breakthrough win over Calder. We put his performance under the Player Focus microscope.

Earning a Vic Metro Under 18 nod in your bottom-age year is no mean feat, but Caddy has done so on the back of exciting NAB League form. He burst onto the scene with three goals from 15 disposals and six marks on debut, and booted multiple majors in both of his next two outings. Only thrice has Caddy not bagged multiple goals in 2022, including in his latest outing against Calder. His 18 disposals, nine marks and four inside 50s are all season-high tallies.

Starting out as he intended to go on, Caddy immediately found himself among the thick of the action. As would be a key feature throughout the game, the bottom-ager hit up strongly to mark off the first centre clearance, benefitting from a lovely Cooper Harvey kick to centre half-forward.

He covered plenty of ground in the opening minute, working back into the corridor to nab another mark and cut off Calder’s rebound effort, before again playing on quickly and booting long inside attacking 50.

Even when he failed to reel in a mark, Caddy managed to put his frame in between his opponent and the ball, and scooped it up cleanly to keep the play moving. A couple of shots on goal resulted in one lone behind, which was earned via a terrific double-back lead and sliding mark.

Caddy would likely have wanted an unideal checkside dribbler back in the final minute, though the optimistic kick worked out anyway, as the Calder defender was pinged for a deliberate rushed behind, and Northern nabbed a goal after the siren.

The second term was littered with ‘almost’ touches and marks for Caddy, though he again made a great start to proceedings. He lead his opponent to centre half-forward on the first passage of play, and picked-up cleanly off the deck before dishing off wide for a long Ben Ham goal.

An otherwise quiet opening 10 minutes was a result of Calder’s more deep and frequent attacking entries, but Caddy was sighted presenting as Northern’s primary option. His direct opponent, Luca Alessio, was also doing well to quell his marking influence with body contact on each leap.

Much like in the first quarter, Caddy ended up with an opportunistic goal assist in the dying stages. He poked the ball forward in a scramble, where the ball found Ham at the top of the goalsquare for another major. To this point, he was certainly more provider than scorer.

Having brought his teammates into the game during the first half, Caddy took over the scoring in term two with an array of shots on goal. He ended up with two goals and three behinds, making for his most productive period as Northern broke to an unassailable lead.

Caddy’s two majors came consecutively, and essentially within as many minutes of each other. The first was a 40-metre set shot which he earned via a well-reached overhead mark, while the second was a good bit of improvisation to volley home from the goalsquare, as he was fed over the back.

He missed a couple more gettable set shot opportunities later in the term, but got his marking game going again and was well supported by teammates. In one instance, Rohan McKenzie put on a nice block to allow him to leap at the ball unimpeded, which is where he shines.

Almost as if it were a set play, Caddy again found himself the target of the first centre bounce break as he marked up at half-forward. He followed up with a couple of efforts beyond the 50-metre arc, but lacked a touch of polish on his kicks to leading teammates.

The downpour may not have suited his style, but Caddy continued to leap for the ball and looked to cap off his game with another shot on goal after 15 minutes. From just inside 50, he wheeled around the man on the mark but put the attempt well wide, ending up with 2.4 next to his name.

Overall, Caddy’s strengths are quite clear. He plays like a true centre half-forward, but will hope for a slight growth spurt given his current measurements. His athleticism and aerial ability are high-quality, and while laden with x-factor, Caddy can sharpen up his field and goal kicking over the next year.