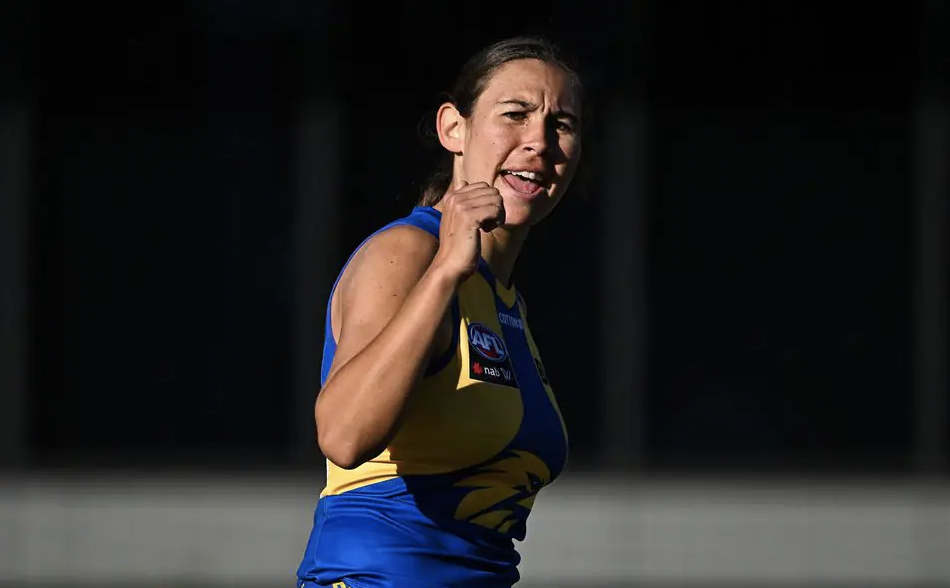 IN a unique series for the lead-up to the 2022 AFL Women’s Season 7, Rookie Me Central will look at 10 players to watch this year who have played under 10 games. Whilst it would be easy to pick those who finished high in last year’s Rising Star, or top picks this year, we have opted to look at players who have been around for at least two seasons – or in previous years – but have only managed to play nine games or less. Next up in the series is West Coast recruit Krstel Petrevski.

A 21-year-old talent and former Dee joined the blue and gold for greater opportunities, Petrevski is one with undeniable talent, but just starved of consistent chances due to the strength of the Melbourne line-up. Originally from Halls Creek in the north of Western Australia, Petrevski joins a long line of incredibly talented footballers from the small town, at the elite level. The midfielder came through the Calder Cannons program, playing the 2019 NAB League Girls season. There, she averaged 10.3 disposals, 2.4 tackles and around an inside 50 and rebound 50 per game for the Cannons, as part of the Calder side that finished runner-up to Northern Knights that season.

When the AFL Women’s National Draft rolled around, Petrevski had to wait until Pick 78 to get her chance, taken with Melbourne’s last selection in that draft. Remarkably, Petrevski made her debut in a final against GWS GIANTS in 2020, before playing the two games in 2021, averaging 3.5 disposals and booting two goals across those games. Adding just the one additional game in 2022 to take her total to four, Petrevski has only managed the feat across three seasons, prompting her return to her home state for greater opportunity.

Capable of playing forward as well as through the midfield, Petrevski has natural talent to burn, and the Eagles should have her starting from early in the season. She is a player who has the state league experience through the Essendon VFL Women’s program in the lead-up to the the AFLW Draft, and though not a high possession winner, is a high impact player. If Petrevski can find a position within the Eagles side – perhaps a damaging outside player who can hit targets going inside 50 – then she can get some continuity into her game. With Season 7 fast approaching, Petrevski is one of a number of Eagles recruits with AFLW experience, and will be one looking to make an impact from early in the season.

Petrevski is the cousin of fellow Eagle Sam Petrevski-Seton, and a proud Kija and Jaru woman. In 2021, Petrevski designed the Melbourne AFL Women’s Indigenous jumper that was worn in the Round 5 match against Collingwood, as well as that of the Melbourne Storm’s Indigenous jumper. Back in Western Australia, the new West Coast Eagle is sure to have more opportunity and a chance to excite fans with her talent that can come to the fore.