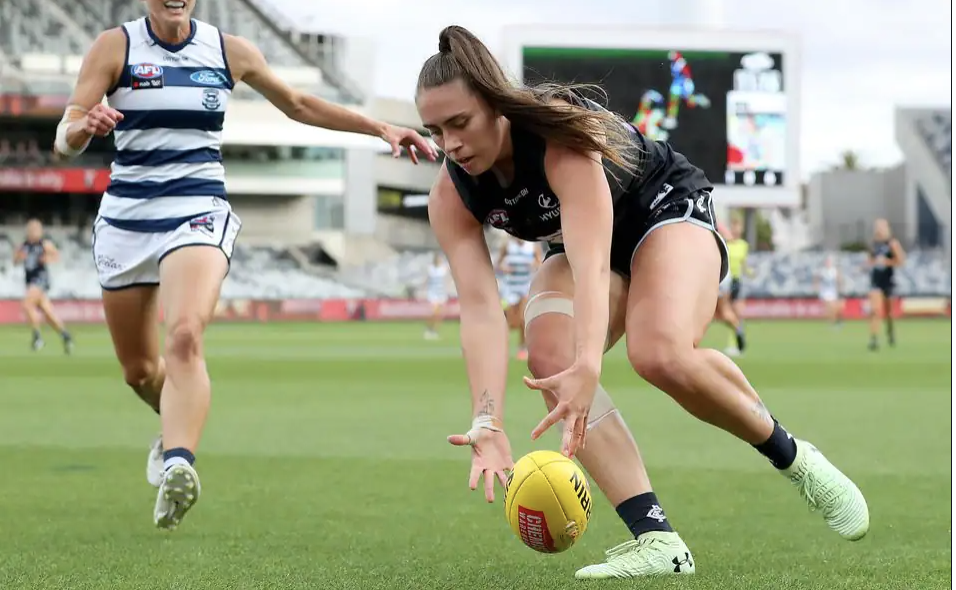 IN a unique series for the lead-up to the 2022 AFL Women’s Season 7, Rookie Me Central will look at 10 players to watch this year who have played under 10 games. Whilst it would be easy to pick those who finished high in last year’s Rising Star, or top picks this year, we have opted to look at players who have been around for at least two seasons – or in previous years – but have only managed to play nine games or less. Next up in the series is Gold Coast recruit Courtney Jones.

Taking three seasons to finally her chance after being picked up in the 2019 AFLW Draft, Courtney Jones burst onto the scene in 2022, playing nine games and slotting eight goals to win Carlton’s leading goalkicker award. As surprising as her out-of-the-blue season being have been, it was just as much of a shock when the 168cm forward announced she would be heading north to go to the Gold Coast.

Over the first two AFL Women’s seasons, Jones could not manage to crack in for a game, largely due to the lack of matches at state league level. The 2020 VFL Women’s season was wiped out by COVID-19 after Jones had impressed for the Southern Saints prior to being drafted in 2019. She finally got her chance in 2021, playing 10 games and slotting five goals from 13.3 disposals and 4.2 marks, playing in that high forward role.

In 2022, Jones finally got her chance in 2022, playing nine of a possible 10 games, averaging 78.4 per cent game time. Playing inside 50, Jones became a damaging sharp shooter, kicking eight goals at almost a goal per game, whilst picking up 2.4 marks and 2.2 tackles. Playing deeper forward than she had at VFLW level, Jones averaged just under a mark per game inside 50, and laid a tackle per game, but read the ball well from the kick-out also winning seven intercept possessions. Still young, Jones has plenty to offer at her new club.

Though the Navy Blues would have dearly loved to have kept the forward, Jones is a perfect fit to a growing Gold Coast team, with the 22-year-old ready to shine. Traded for a bargain basement price of Pick 49 over the off-season, Jones is a player who can far outweigh her value, particularly if she can maintain her goal a game average. She can also play further afield though and be that higher half-forward again or even through the midfield, using her slick skills to distribute the ball to leading forward inside 50.

In Season 7, Jones is one of many wearing new colours, but after a breakout season, Suns fans will be hoping she can go to another level again. No doubt plenty will watch on in fascination to see what kind of role she plays for the South East Queensland side.