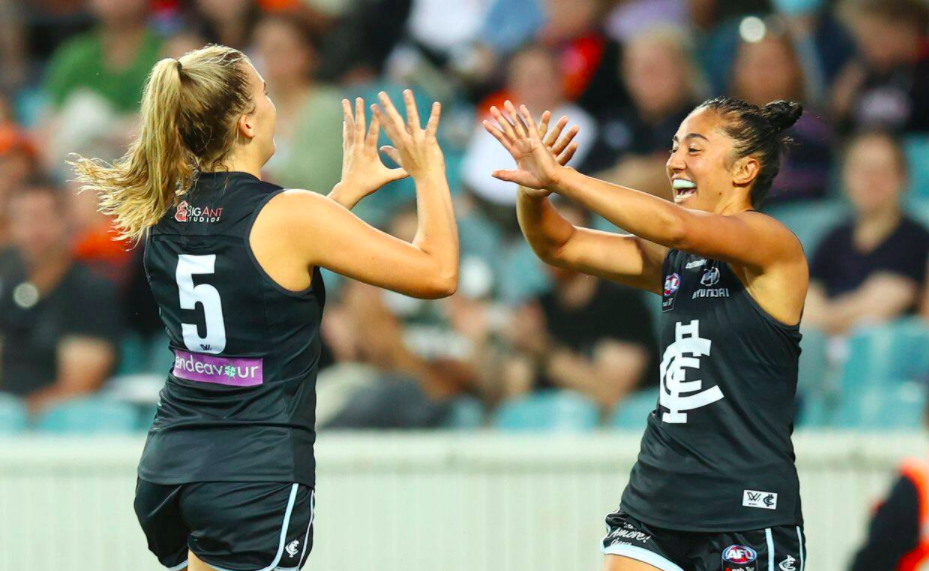 AFTER showing glimpses last season, and although they were technically in the finals race until the final few weeks of the season, Carlton ultimately failed to make finals yet again. Although they were able to comprehensively deal with the lower sides, Carlton struggled against the top sides last season so will have to turn that around this season in order to be a contender, but with a second successful off season of losing key players, many questions surround the Blues this season.

Now some may say the obvious choice for this is Darcy Vescio, but it is hard to argue the benefit and advantage Moody brings to this side.

She is one of the premium rucks of the competition, and her ability to give her midfielders the first use of the ball is second to none. She did also make the All Australian squad last season so her ability is certainly getting noticed these days, the question will be can she defy the stereotype of the award winner and take the title.

Season 7 is the perfect opportunity for Guerin to finally become a lock in Carlton’s best 21.

Ever since she crossed from the Dees, she has struggled to nail down a spot in the side, many would argue through no fault of her own.

With no Madison Prespakis or Georgia Gee in the side, this is the perfect opportunity for Guerin with the amount of pace she has to come into that midfield and inject a real spark in there.

How will they replace Prespakis and Gee?

Arguably Carlton’s two biggest losses in the offseason were Prespakis and Gee, who left to join Essendon. They were Carlton’s two best midfielders, so their absence will leave a large hole that will need to be filled.

As previously mentioned Guerin is one perfect replacement, but the question will be who will the other player be. If Carlton want to be a finals contender this season they are going to have to fill that gap, and quick.

How do Carlton improve against the top sides?

Last season Carlton took care of the sides below it with relative ease, but when it came to the stronger sides they really struggled.

If the Blues want to take the next step this season and make it into the finals, they are going to have to match it with the Adelaides and Brisbanes of the competition, and it may have to be that some of their very talented younger players really step up and help bridge the gap.

Is Phoebe the solution to free up Darcy?

After Tayla Harris departed for the Dees, it became much harder for Darcy Vescio to have an influence on the game like she has in previous years.

Carlton really needed a second tall target in their forward line to take the pressure off Vescio, and they may have found it in Phoebe McWilliams.

The question will be though, is will McWilliams take some of the pressure off Vescio, freeing her up in the process, or just take all the forward feed and Vescio’s influence remains quelled?

How do Carlton ride out the tricky start to the season without Lucy McEvoy?

As if Carlton’s off season departures were not a hard enough pill to swallow for fans, it was announced a few weeks ago Lucy McEvoy will miss the start of this season after undergoing shoulder surgery.

At this stage she is scheduled to be back midseason, but injuries are unpredictable so she may be back sooner or later than that.

Unfortunately for Carlton fans, the luck of the draw sees Carlton have a much tougher front half of the season than their back half. In the first five rounds this season Carlton face three of last year’s finalists and two of the new sides, whereas in rounds 6-10 it is all teams that did not make finals last season.

Carlton will have to try and stem the margin against the top sides in the first half of their draw while winning convincingly against Essendon and Port Adelaide if they want to still be in contention for finals by the time McEvoy is back. In a season as short as AFLW is, every loss is much more impactful than in the longer AFLM season.