Eagles focus on returning to standards 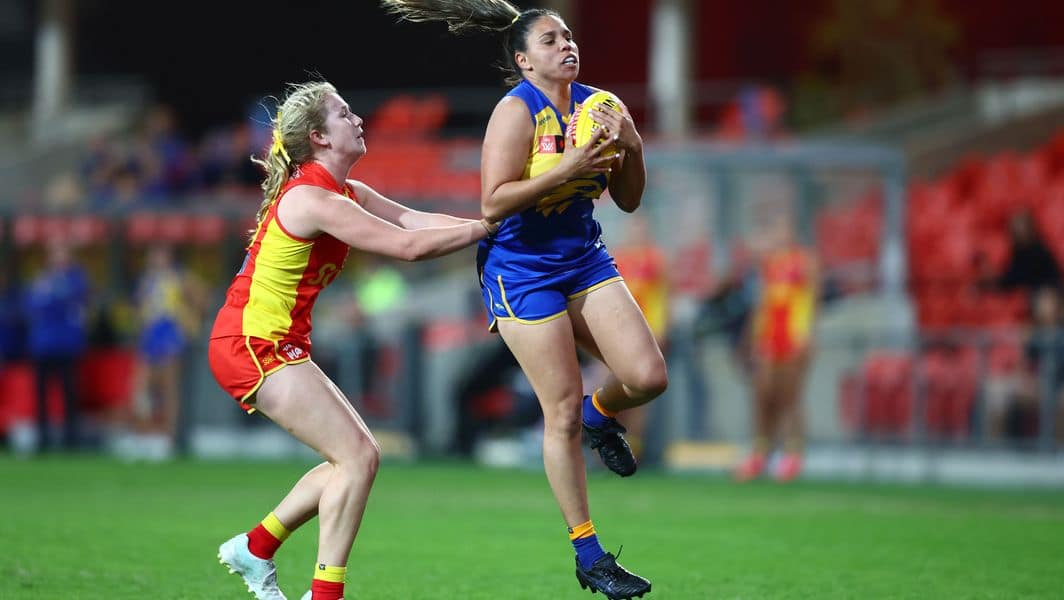 WEST Coast coach Michael Prior and talented midfielder/forward Imahra Cameron have pledged to try and get the team back to the standards the Eagles set in Round 1 against Port Adelaide in their Round 3 clash against Essendon on the weekend. Speaking mid-week ahead of West Coast’s Indigenous Round home match against the Bombers at Mineral Resources Park, Cameron said the loss to Gold Coast in Round 2 was “quite disappointing”.

“It was quite disappointing but we know we’re better than that,” she said. “We kind of went away from the standard that we know we can play, so we’re hoping to put that aside and focus on this weekend.”

For Cameron, the round always takes on a special meaning, and more so the fact that she will get to run out in her local Country. Cameron said the meaning behind the round was important as awareness for non-Indigenous people.

“It’s pretty special to then play within the Country from where I’m from,” Cameron said. “Obviously being from this Perth metro area, playing here is pretty special. “It’s also about playing at this club and the connection I have here so I’m very excited for it.”

“To me it’s actually a pretty special round being Indigenous and continuing to celebrate our culture and and to embrace it and educate people around our culture and what it means and as well acknowledging and honouring those before us is really important, really special.”

West Coast will wear its Indigenous jumper not only this round, but in Round 4 as well, with Cameron explaining the meaning behind the design.

“Our  guernsey was designed by Buffie Corunna and within the design it’s pretty special to represent the club itself and  its connection to the community,” Cameron said. “The design talks about how club and community can work together with continuous communication and respect that we have for that connection.”

Prior said he knew Essendon would be a different challenge to Port Adelaide a fortnight ago with the Bombers posing a number of huge challenges coming off a win over Hawthorn, and a narrow one-point defeat at the hands of Carlton.

“I think they’ve done really well with their recruiting and obviously have some really key mids that we need to take care of, and Bonnie Toogood up forward is a really class act and a really good forward,” Prior said. “We need to be on our game and make sure we get back to the way we want to play and as Imahra just alluded to, we went away from that on the weekend.

“Our ball moment didn’t resemble anything like it did Round 1 and we got beaten around the stoppages, I think it was minus-14 in stoppages. “The ball lived in Gold Coast’s front half and we were trying to get it out and we couldn’t get it out. “If we can turn around our clearances and get it in our front half, I think we’ve got enough talent up there to score, we just didn’t give our forwards enough opportunity on the weekend.”

After doing a great job on Erin Phillips a fortnight ago – keeping her to two touches at half-time – Prior was asked if Aisling McCarthy could potentially run with Madison Prespakis, who was incredible against her former side last week.

“Aish is someone that we’ve gone to in the past, I think we’ve got a number of options,” he said. “I think there’s some people who though Ash tagged on the weekend but she didn’t, she just played her natural game. “She’s showing a thirst for that role, but we’ve just got to pick and choose the times and when to use her in those roles and it could just be this weekend or it could just see how the game unfolds and if we need to go to something we can go to something later on.”

Prior said that signs were also looking good for defender Belinda Smith and forward Aimee Schmidt to both be available, with Smith sustaining a rib injury in the loss to Gold Coast, and Schmidt coming out of concussion protocols from the Round 1 win. West Coast will take on Essendon on Sunday, September 11 at 4:10pm local time.