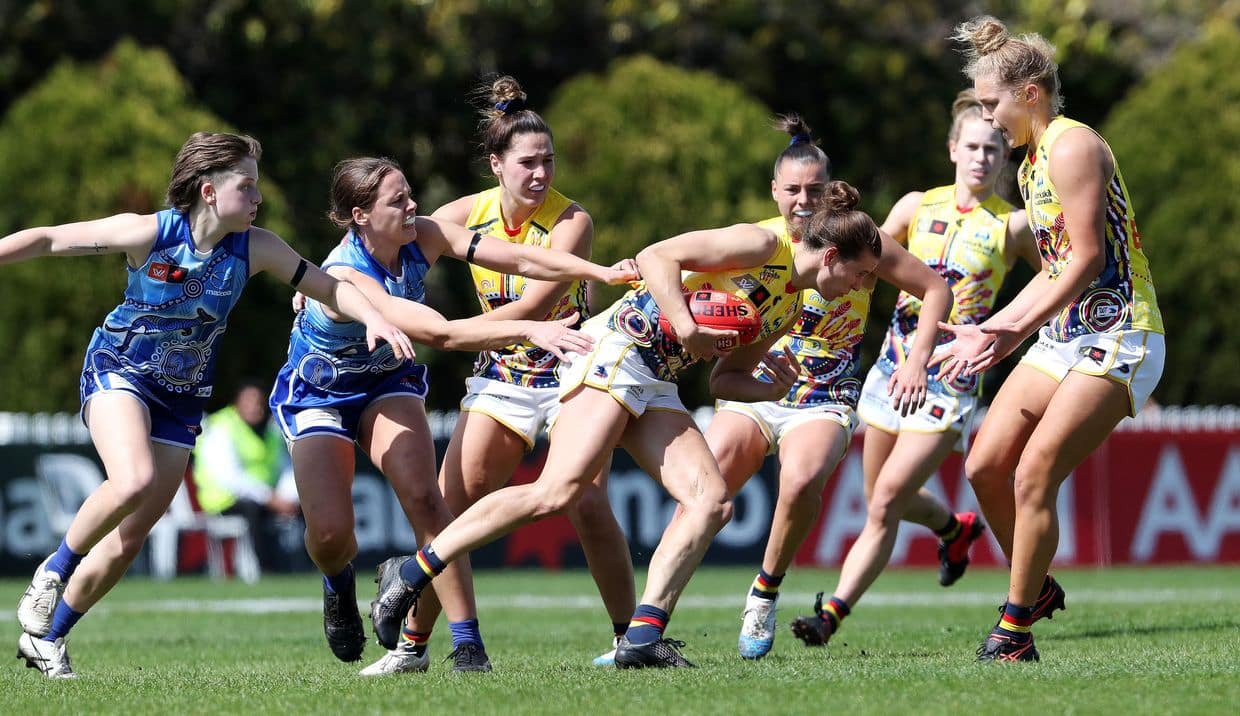 AFTER describing his defence as “shabby” in the first half, Adelaide Crows AFLW coach Matthew Clarke said he still had the confidence that his side would get the job done against North Melbourne yesterday. The Crows conceded the first two goals of the game and were held goalless in the first term, but stepped up to slot the last four majors of the game – two in the final stanza – to win by 14 points, 4.6 (30) to 2.4 (16).

At three quarter time, the Crows had regained some of the momentum, but had only managed the two behinds to one behind in the third term to draw level. When asked if he was confident going into the final term having the wind at his side’s back, he said “reasonably confident, as confident as you can be”.

“I was pretty confident throughout the course of the game even though I thought our first quarter was really strong, great start, then we gave up a couple of cheapies, so I thought the way we were playing was alright bu they certainly had their moments,” Clarke said. “They have some high-end talent running through their mid. Garner was giving us some grief, particularly in the first half. But we were reasonably confident, as confident as you can be.”

The defensive structures are an area that the Crows will look to work on, with the miscommunication proving costly in an otherwise impressive game for the home side.

“I thought we were a bit shabby in the first half,” Clarke said. “We had plenty of bodies in there, we just lacked a bit of communication and a bit of clarity who was on who. “Therefore we ended up with three or four in the air and no one at ground level at times, so we can tighten up that, there’s no doubt but we’ll get there.”

Clarke described the game as a really “tough, tense, tight battle” and his troops were up for the pressure that North brought to Unley Oval. Both teams ran at elite efficiency of 70 and 69.7 per cent, with Adelaide critically winning the clearances by nine (31-22), as well as the contested possessions (100-84), two keys to beating North Melbourne.

“Clearances were relatively even (early) but we (finished) slightly ahead in that,” Clarke said. “There was a bit of a breeze we were able to get it down our end and lock it away pretty much for the majority of that last, which is obviously ideally the way you want to play. “I thought it was a good game, somewhat frustrating when it’s a low-scoring two-goal apiece affair. “I was thinking ‘this is good footy’ but there’s just not a lot of impact on the scoreboard. “That’s alright.”

The move to shut down the run of Jasmine Garner in the second half by moving captain Chelsea Randall onball proved inspirational, as the Crows were able to work as a cohesive unit, to win back the control.

“Garner probably had the better of our midfield battle in the first half,” Clarke said. “But in the second half, Ebony (Marinoff), Anne (Hatchard), Chelsea (Randall), Teah (Charlton) and a little bit of Abbie Ballard, that ability to spread the load and work collectively to get an outcome, it was good.”

A player Clarke highlighted for her ability to hold her spot in the ruck and impact around the ground was Caitlin Gould. The tall utility finished with 14 disposals, four marks, four clearances, 25 hitouts and an impressive goal to really stamp her authority on the match.

“It was nice for her to get the goal at the end,” Clarke said. “Her contest, her follow-up, some of her aerial moments, it was a really strong game. “She’s worked really hard in the off-season and she got really strong competition. Montana McKinnon‘s out of the team at the moment, but there’s no doubt she’s got the capacity to play AFLW football so Gouldy needs to be on her mettle.”

Next week Adelaide will travel to Victoria to take on Collingwood at Victoria Park, which is set to be a massive clash for both sides. Clarke said his team would just continue to improve and try and put itself in the best position to win each match.

“I’m just really enjoying the season and enjoying the way that the team’s building and embracing the fact that it’s going to be challenging and hard, but they’re willing to work through it.”