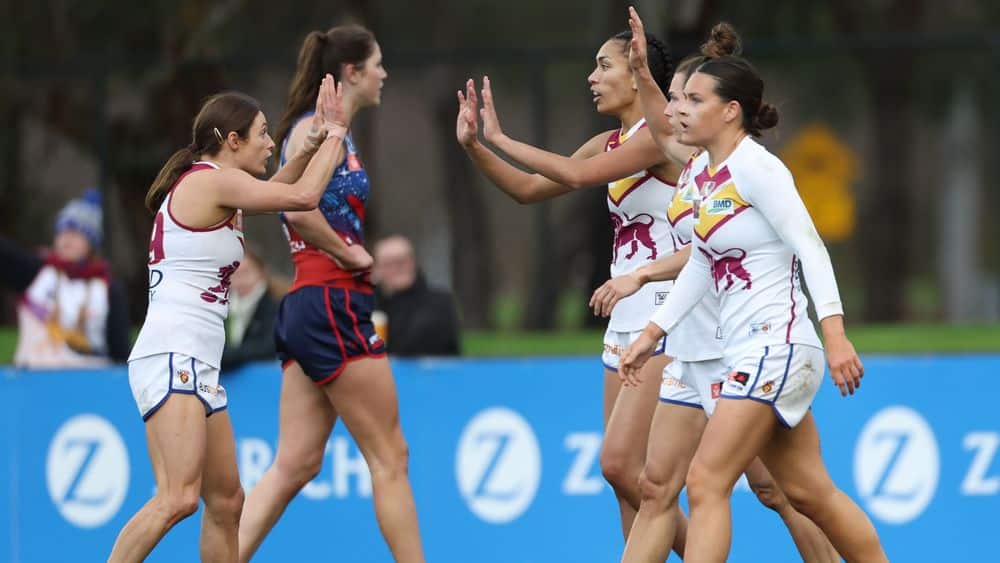 SUNDAY’S action in the AFLW saw many of the top teams in action.

After a strong start from their opponents, Adelaide and Brisbane ran over the top of Collingwood and Melbourne respectively, while Richmond hung on for a narrow win over Essendon.

Adelaide has knocked off the previously undefeated Pies by a mere five points in a tough slog at Victoria Park.

In a tough, contested match, Adelaide rebounded from a bad first quarter on the scoreboard and survived a late Collingwood surge to take the win.

Watching Adelaide is starting to feel like déjà vu

One thing that has become characteristic of Adelaide’s wins this season is that it has come from behind on the scoreboard to take the win. This shows the experience and maturity of the Adelaide team to not drop its heads when it is down and keep working towards victory.

Tackling intense from the get go

The intensity and tackling pressure from both sides were intense from the get go, ensuring that easy and clean possessions were going to be hard to come by,

There were a combined 37 tackles between the teams in the first quarter alone, but while watching it felt like that figure was much higher. The kicking efficiency from both sides was also below 50%.

That tackle figure grew to a combined 127 tackles by the end of the match.

For much of the first quarter Adelaide was dominating the territory battle and time inside 50, but just could not convert and put the score on the ball.

In the first quarter Adelaide had 11 inside 50s for a return of a mere three behinds, while Collingwood only went inside 50 twice, but had a much better return of a goal.

Irish bravery does not all go to plan for Kelly

Just as Collingwood was starting to get on top in the third quarter, Niamh Kelly put her body on the line to stop what otherwise would have been a certain goal for the Pies.

Unfortunately for Kelly, it came at a cost as she dislocated her shoulder and could not see out the game. Time will tell the severity of the injury, but at the time of the injury it looked very painful.

A few Pies in new roles?

A couple of Pies played new roles today but they proved to be good moves.

With no Alison Downie in the side, Sabrina Frederick spent the game in the ruck and did really well in the role. Her running game was particularly impressive and seems to have improved from previous weeks.

The other Pie in a new position was Ash Brazill. Back in for her first game since took time off to focus on her netball, she spent much of the game as a forward, moving into the midfield in the last quarter. She certainly put her body on the line, copping a blood nose after a collision in a contest.

Richmond won its second game on the trot and consigned Essendon to a second close loss in the process, as the two sides locked horns in the AFL Women’s first-ever Dreamtime game. In greasy conditions at ETU Stadium, the Tigers’ efforts against the wind amid a term three downpour proved the difference. Bombers forward Amber Clarke gave her side a sniff by goalling with 68 seconds left on the clock, but it proved too little, too late for the expansion club.

The conditions were cool, the contest was hot, and there was ice in Monique Conti‘s veins. Arguably the competition’s best player after four rounds, the Richmond on-baller produced a couple of magic moments amid her 15 touches and five clearances. A slick goal from the pocket in term three proved the match-winner, and Conti’s poise to hit up her skipper with the final centre clearance was just as important.

The Brennan’s back and she’s looking for trouble. Sunday marked Katie Brennan‘s first match for Season 7, and the Richmond captain gave her side plenty at centre half-forward. While her streak of 15 matches with a goal was snapped, she claimed the first and last behinds of the game and made Essendon scramble with its defensive matchups. Another positive was how her presence freed up Courtney Wakefield, who booted two goals from deeper inside 50.

The Bombers won’t be swatted away

They’ve suffered two close losses to counter their excellent wins, but the Bombers just never seem to go away. Despite being outplayed for large periods, Essendon remained in the hunt given the low-scoring nature of the contest, and snared late goals in terms three and four to very nearly snatch four points. Tigers fans would have been sweating when Clarke snapped Essendon back within a kick – enter Richmond’s number four.

Sudden downpour: steer your side to safety

Not to be caught off-guard like F1 teams scrambling for full wet tyres amid a downpour, Richmond was prepared for the third term slog. With rain teeming down, Conti defied the conditions to slot a classy goal with two minutes down, before Essendon began to turn the screw. Backed by a tailwind, the Bombers managed three behinds but were given a big boost by Daria Bannister‘s set shot conversion late in the piece.

Approaching the midway point of the season, the last few top eight spots remain well and truly up for grabs. With both Richmond and Essendon wedged in there as two of eight sides on eight points, this game looms large in the finals picture. The Tigers were up for an arm-wrestle, and many other clubs in the race will begin to lean on the stakes of winning close games throughout a 10-round season.

Naarm has suffered its first loss of the season, after going down to Brisbane by 15 points at Casey Fields.

After a strong start from the Dees, Brisbane outclassed them for the remaining three quarters, ultimately running away with the win and its undefeated record in tact.

Can anyone stop Brisbane? Are they the outright premiership favourites?

Coming into the clash, many speculated this could be a preview of the Grand Final that is yet to come, and that may still ultimately be the case, one thing the match did prove was how hard Brisbane are going to be to stop this year.

The Lions were a class above the Dees at a ground that has become quite a fortress for Naarm in recent times, so the question is what is it going to take to stop this Brisbane side this year? Time will tell.

Is this the loss Naarm needed to have?

It is safe to say that the Dees were below their best against the Lions. Despite a strong start, the Dees’ skills, intensity and run for each other dropped off after quarter time.

But, this might turn out to be a blessing in disguise for Naarm. This has all the hallmarks of a loss that the side needed to have, a bit of a wake up call you might say. This will give them a perfect opportunity to go back, reassess things that have not been working for them all year, and could just as easily come back out next week and beyond all guns blazing.

As is often the case with Brisbane, so many of their stars really performed when it counted.

Ally Anderson finished with 22 touches and a whopping six tackles, while Sophie Conway with 17 touches and Emily Bates finished with 16 of them. Jesse Wardlaw also booted two majors and once again proved to be a really strong marking target up forward.

In what was at times a frustrating afternoon for her side, one player that was really impressive for Naarm was Blaithin Mackin. The Irish import was on debut, and although she only had the eight touches, it was what she did without the ball that was particularly impressive.

She played a shutdown role on Orla O’Dwyer and managed to keep the star Lion to only eight touches herself, and the speed and run Mackin was able to provide for the Dees was particularly impressive.