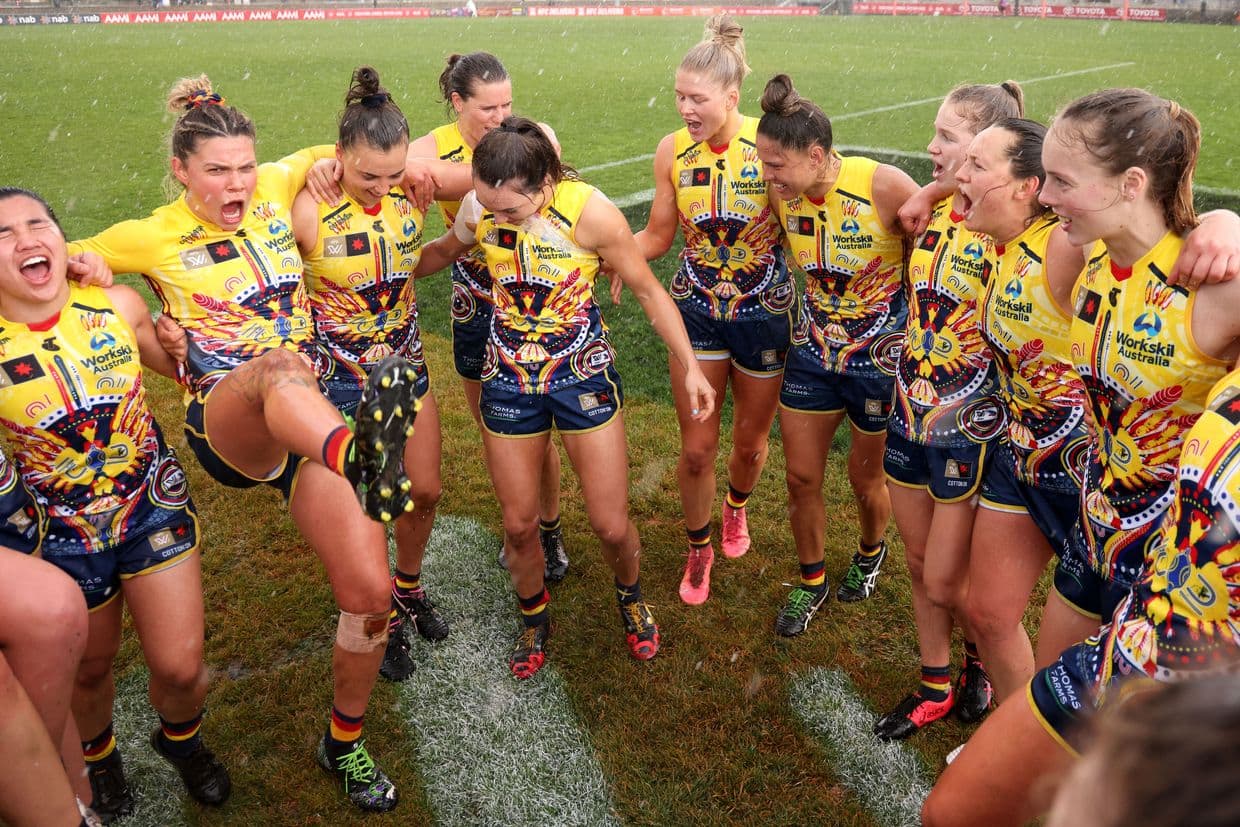 DESPITE dominating the inside 50 count 36-15, Adelaide had plenty of “tense” moments during the Crows’ win over Collingwood by five points at Victoria Park yesterday. Crows coach Matthew Clarke said there were definitely some nervous moments with the Pies drawing with a kick late in the game, before a Stephanie Chiocci snap missed to the left moments before the final siren. Adelaide was able to hold on to win, 2.9 (21) to 2.4 (16).

“I got a bit tense, certainly in the last 90 seconds,” Clarke said. “We’d have rather it be down the other end for sure, but in the end we hang on. There was some really good footy from us, but unfortunately we just didn’t take our chance and convert. Certainly the inside 50 differential was in our favour heavily, but they defended pretty stoutly as well so we were really happy to get away with the win. Obviously Collingwood were undefeated coming in, so we were happy.”

Adelaide had far more chances on goal than the Magpies, but the Crows only won the clearances by one and the hitouts by two. They used the ball far better with a 63 per cent disposal efficiency from 34 more disposals, but could not capitalise inside 50 with just a goal every 18 entries. Remarkably the Crows also had double the marks inside 50 (10-5) but were often forced to take shots from tough angles. Regardless, the Crows won the territory battle.

“Most weeks we try to have it that way. It’s not always the case,” Clarke said. A couple of weeks we had to win another way, Richmond won the territory battle. Overall it will be an interesting one to look back at. I think we’ll look back and think ‘yeah we liked those elements’ but there will probably be a few things we need to tidy up.”

When asked about whether or not the win over the Magpies was his side’s best performance, Clarke said it was up there with the previous two victories.

“I think all the games have been really challenging,” he said. “I was really happy with our last two wins as well, I thought both those games we just showed a capacity to absorb pressure and come home strong. Today was a little bit different in that we had to hang on in the last little bit there. I’m really enjoying the year, I think the group’s starting to come together and gel. Even though it’s only a short time since last season, you do have to just start again, so to get to three and one, we’re rapt.”

One of the major talking points out of the game was a dislocated shoulder to ex-Eagle Niamh Kelly, who forced her way back into the side after missing the last two matches. The hard running talent saved a crucial goal and managed the nine disposals and four tackles in the win, but was forced to play no further part in the game.

“The shoulder popped out and went back in and she was quite pain free and comfortable, but it just wasn’t 100 per cent stable so the medical team made the call no more today,” Clarke said. “So we’ll just assess her during the way, but yeah she was really influential in the first half, even the tackle she laid to save a goal when you see the final result, that’s pretty significant.

“She’s been a great addition to our team, she’s been training incredibly hard and has been unlucky not to be in the side so for her to come out and play really well was great, and then of course frustrating that she got injured.”

Adelaide will eye off a fourth straight win in Round 5 when the Crows host the GWS GIANTS at Unley Oval in the final game of the weekend at 2:40pm.