Clarke wary of what’s to come 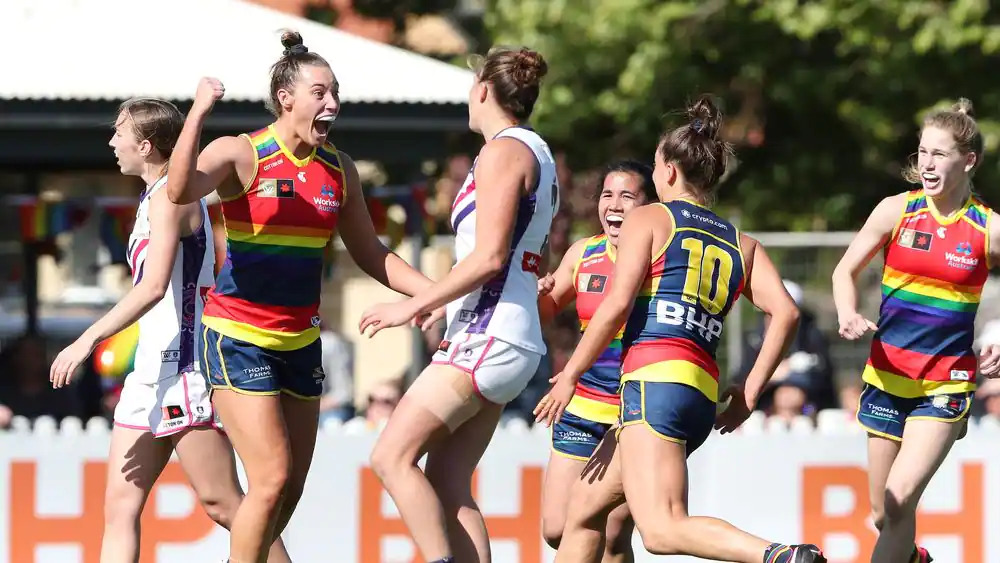 DESPITE his team going scoreless in the opening quarter of their win against Fremantle on the weekend, Adelaide coach Matthew Clarke was actually happy with how his team performed in that quarter.

“I thought Fremantle’s pressure right from the start was elite, they were at us. I actually was happy with the first quarter even though we didn’t kick a score, but I thought the second and third quarters they clearly had the better of the game. So that was good that we were able to respond to that challenge, but all credit to Freo and the way they went about it.”

Despite being behind at three quarter time, Clarke was still confident his girls would come through and get the chocolates.

“We finished pretty strong all year, but clearly we were well behind and probably even late in the third they had a few chances where if they’d been able to get it out to a three goal game then that gets a bit tricky, but obviously really strong last quarter. Started to win some ball out of the centre bounce and our forward line were able to convert which was great.”

Among many players whose efforts he praised, Clarke spoke very highly of Danielle Ponter, who returned to the side this week after an injury layoff.

“It’s handy to have her back, and it was really good for her to go into the midfield in the last quarter. So through the preseason she did quite a bit of work with our mids, but obviously coming back after an injury layoff we predominately used her forward, but in the last to be able to throw her up there and for her to have an impact was really good.”

Another Crow who earned the praise from the boss was Chelsea Randall, who was thrown forward at times in the win.

“Sometimes you get lucky but you get luckier when you have Chelsea Randall in your team. She’s obviously been having a great season, and that ability to use her in some different roles is really important for us.”

Next week Clarke’s Crows have one of the toughest challenges in the AFLW this year – they’re on the road to face the rampaging Lions.

“Obviously Fremantle have had a challenging season with all their injuries and so forth at the start of the year, but generally Adelaide and Fremantle is a great game, and guess what? It was a great game and clearly Brisbane they’ve probably been the form team of the comp thus far so to get a chance to go up there and to compete against them will be really good.”

When asked about how he planned to beat Brisbane next week, Clarke replied with a laugh “I’ll worry about that next week, I’ll just enjoy this one!”

“I mean I’ve obviously watched a little bit of their footy and their capacity to use the ball, to use the space and to run is probably good as anyone in the comp, so we’re going to have to be at our best to match  that, but we’ll worry about that next week.”