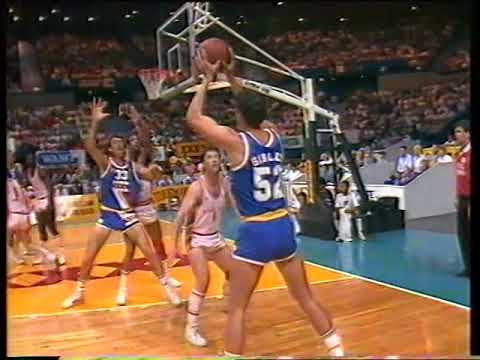 EVERYONE knows of the 1986 National Basketball League (NBL) Grand Final, but in case you are one of the few who do not, here is some context. The Adelaide 36ers dominated all season with 24 wins and two losses while the Brisbane Bullets finished with a 17 and nine win-loss ratio. When the two sides faced off in the highly anticipated Grand Final of the eighth season of the NBL, the 36ers won a crazy game by three points in overtime. Game 2 however was a completely different story with the Bullets coming out on top by 21 points, in front of a very animated 36ers crowd. It all led up to this, Game 3, in front of another sold-out 36ers crowd, with the winner of this game bringing home the first championship to their franchise.

This was a time when athleticism was the best predictor of whether you had a roster spot or not. The very first play of the game was an alley-oop and wven in the very first few minutes, fans could tell this was not going to be a repeat of Game 2. The Bullets were now facing a different team – a more focused team. One reason being that the 36ers were not allowing league MVP and Bullets superstar Leroy Loggins, any wriggle room. But Loggins earned every one of his eight points as his team trailed 25 to 35.

Loggins switched things up after the first by playing more in the low post, utilising his height advantage over defensive specialist and previous rookie of the year, Mike McKay. But Loggins would cost his team early by picking up his third foul very early into the second – a common theme from Game 1 where he was fouled out. But even with Loggins staying in the game, the Bullets looked unhinged and ended up trailing by 16. But with the pace of 80s basketball, they shrunk that lead to four points within two minutes. Due to that and the continued offensive rebounds, the game was back to being neck and neck.

During this run, even with the quality of a 1986 basketball clip, you could see the veins in 36ers’ Coach Of The Year, Ken Cole pulsate. Luckily for him, Loggins ended up fouling out mid way through the third. An unequivocal turning point of the game. 36ers’ Darrly Pierce immediately shot out of the gates, always looking to shoot from deep and take the game and you could not blame him as he already had four threes before the last quarter.

The Bullets almost instantly went down by ten. Two minutes later they were down by four. Seriously, no one could question this team’s heart. But with Bullets’ Robert Sibley fouling out, their chances were getting slimmer by the minute. But the Bullets did not have another 16-2 run, they did not take care of the ball, in fact they could not even sink a free throw such was the pressure from the 36ers. Like a real championship team, Adelaide never took their foot off the pedal until the final buzzer sounded 113-91 as the Adelaide 36ers became NBL champions, their first of four.

Mark Davis, the season leader in rebounds, was now a Grand Final MVP, averaging 25.0 points, 19.3 rebounds and 1.6 assists over the series. Pearce also torched the scoreboard in Game 3 with 27 along with Al Green who dropped in 22. Calvin Bruton was undisputedly the best on for the losing team with 31 points.