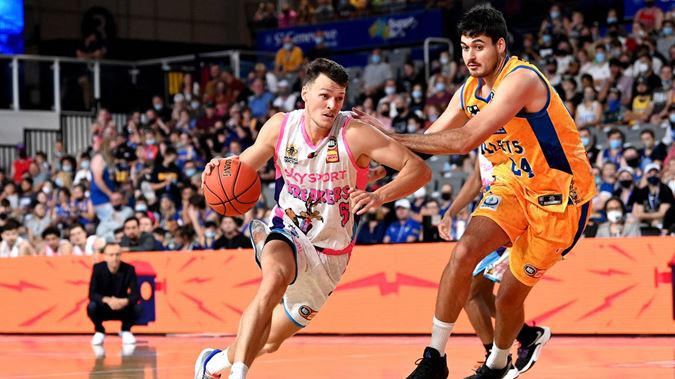 WITH the National Basketball League (NBL) season chugging along nicely (amid a few COVID-related interruptions), there has been plenty of action for fans to enjoy so far. While there was a rough idea at how the standings would pan out throughout the course of NBL22, there has still been a few twists and turns to start the season, with a couple of bolters looking to make their mark in the standings and secure a postseason spot.

In this article we take a look at some of the interesting points to take out of the current standings, as the season reaches the quarter mark of their fixture.

Up the top of the ladder we have some of the usual suspects, with three of the top four sides making finals last season. At the top of the table are the Perth Wildcats, who are back to their brilliant best despite a coaching change during the offseason. They looked slightly beatable in the opening weeks of the season, but have since rallied behind star duo Bryce Cotton and Victor Law (who have gelled perfectly) and look set for another tilt at the flag.

Just below them are the South East Melbourne Phoenix, who look set to take yet another step forward in their club’s short history. The recruitment of Zhou Qi and the MVP-calibre season from Mitch Creek have combined to make a perfect cocktail for the Phoenix, who have lost just the one game this season. Now that they have the finals experience under their belt after last season, they are a red-hot chance to take it all home this year.

Following them are one of the most exciting teams in the competition in the Illawarra Hawks, who sit in third spot in the standings. Head coach Brian Goorjian has shown time and time again why he has one of the best minds for the game, and the addition of Duop Reath to the roster has only seen improvement from this side. They appear a bit of a wildcard in the top four and could very well shake things up at season’s end if they keep this kind of form up.

The final spot in the top four currently belongs to the league’s reigning champions in Melbourne United, who have been able to find their feet after a slow start to the season. An injury to sharpshooter Chris Goulding on the eve of the season opener did not help things, but they have been able to bounce back in a strong way and once again look a serious threat of claiming consecutive titles.

The Cairns Taipans still look a chance to sneak in to the top four despite a number of injuries to key players preventing them from making much ground. They have broken even so far this season, winning two of their four matches. This is all despite an ankle injury to star guard Scott Machado, although this injury opened the door for the emergence of import Tahjere McCall, who has been terrific filling in for Machado.

The Sydney Kings have been inconsistent to start the season, with a variety of results seeing them sit in sixth place with three wins and three losses from their six games. The contrast in their results is astounding, demonstrated by a two game stretch where they lost to Melbourne United by a whopping 42 points in one of their worst performances in club history, before backing it up a few days later and taking down one of the title contenders in the Phoenix. Their fate this season depends on which Kings side we get on a weekly basis.

In seventh spot are the Brisbane Bullets, who have also delivered mixed results to start the season. They have won just two of their five games this season, and look a step behind the rest of the competition. Their campaign started in nightmare fashion, losing to the JackJumpers in their first game as a club. Since then, the Bullets delivered one of the most impressive wins of the season by taking down the Wildcats in the Jungle while defeating the Hawks the following week.

The last side in this section are the Adelaide 36ers, who have started the season in similar fashion to the team above, losing three of their first five NBL22 games. Their two wins came against the bottom two sides in the Breakers and the JackJumpers, so they are clearly not quite in the same conversation as the teams listed above. However, there have been signs of promise, especially with firey guard Dusty Hannahs showing some spark throughout the opening games of the season.

As expected, the Tasmania JackJumpers have not won too many games in their debut season in the NBL. The league’s debut side have only won two of their first seven games, but there have been some encouraging signs for fans to take forward. An opening night win over the Bullets was a terrific start to their time in the competition, and they were able to claim their second victory over the Breakers. The expectations of this side were low heading into the season, and while their record is not red-hot, they have still raised some eyebrows with their strong flashes of play.

The current favourites for the wooden spoon are the New Zealand Breakers, who have dealt with more obstacles than any other side so far this season. They have been stranded on the road for the entirety of the season, and look unable to return home any time soon. Living out of hotel rooms would not be the easiest job, and it has reflected in their record this season. However, they would be pleased claiming their first win of the season in round 6.