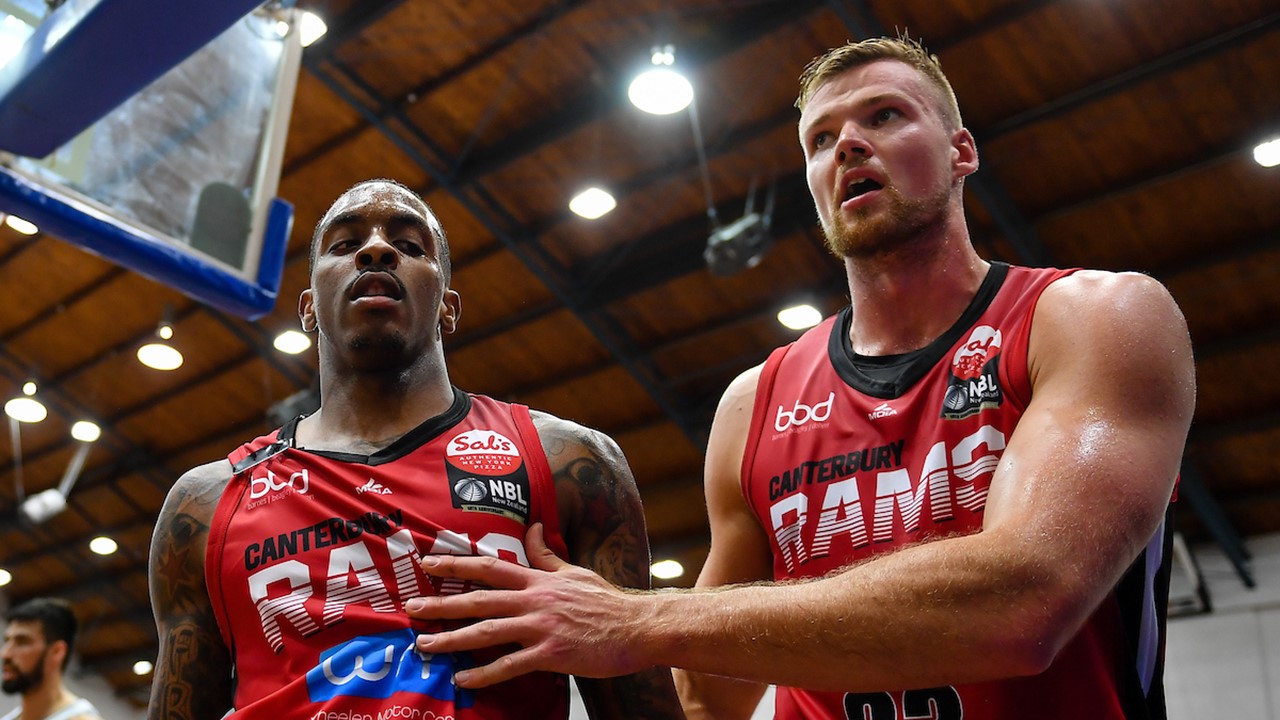 TWO sides with early wins on the board in the New Zealand National Basketball League (NZNBL) felt the pinch last night with the evenness of the 2021 competition. The Auckland Huskies suffered their first loss of the season at the hands of the Canterbury Rams, whilst the Southland Sharks sunk to their third consecutive loss after back-to-back wins to open the season, as Franklin Bulls grabbed another victory.

For the Rams, it was a case of striking gold with back-to-back wins, even though it took them a little while to get going. Trailing by six points at the first break, the Rams managed to cut it back to four, before the Huskies steadied in the third to lead by five at the final break. Then the final quarter happened. A stampede of scoring for the home team resulted in the Rams piling on 28 points to 13 to run away with the contest on the back of the three-point shooting of Deshon Taylor, and the paint work of Jack Salt to combine for 53 points and 22 rebounds in an outstanding dual effort.

The Rams had two less three-pointers for the night, but shot at a marginally higher field clip (45 to 44 per cent), and topped the rebounds (47-35) and steals (9-6), whilst the Huskies won the blocks (5-3) and broke even in the assists (21-21). Canterbury was cleaner with the ball however, having four less turnovers (12-16) and capitalising three times over on those turnovers (21 points to seven). The Rams also had more points in the paint (42-30) and second chance points (15-8) in an all-round impressive effort.

For the Huskies, Brook Ruscoe-Taiaroa lead the way with 26 points, five assists and four rebounds, teaming up well with Chris Johnson (19 points, 12 rebounds, three assists, four blocks and two steals) in a complete performance from the American. Off the bench, teenage start Dontae Nance racked up 19 points, five assists and three rebounds, while Takiula Fahrensohn had six rebounds to go with three points.

In the other match, Franklin Bulls finished the stronger of the sides to pile on more pain to the Southland Sharks, dominating the final quarter. The Bulls trailed by six points at quarter time, but had balanced the ledger at 43 points apiece by half-time. The Sharks gained the minor advantage heading into the final quarter with a three-point lead, before the Bulls slammed home 29 points to 17 to win 82-73.

Zane Waterman was the key man on the night for the Bulls, shooting a deadly 10 of 13 from the field to finish with 31 points, as well as nine rebounds. Waterman’s partner-in-crime Josh Selby was not as accurate as in his first handful of games, only making one of eight from the field for seven points, but still managed the six rebounds, five assists and two steals. Joseph Nunag (17 points, three assists and two steals) and Jaylen Gerrand (12 points, three rebounds) were both clinical off the bench, while Denhym Brooke had his fair share of influence with six points and seven rebounds.

Dom Kelman-Poto knocked down 25 points and 15 rebounds in a losing side, teaming up well with Josh Cunningham (15 points, 12 rebounds) off the boards once again. Courtney Belger (12 points, seven rebounds, two assists and two steals) and Toby Gillooly (11 points, five rebounds) also hit double-figure points in the loss, while Alonzo Burton could not manage to find his range with just six points (two of 14 from the field) but had the three rebounds and three steals for his troubles.

Auckland Huskies and Southland Sharks face off in a battle of last night’s losers tomorrow night, whilst the Canterbury Bulls take on the Nelson Giants next Thursday night, and the Franklin Bulls travel to TSB Bank Arena on the same night to face the Wellington Saints.