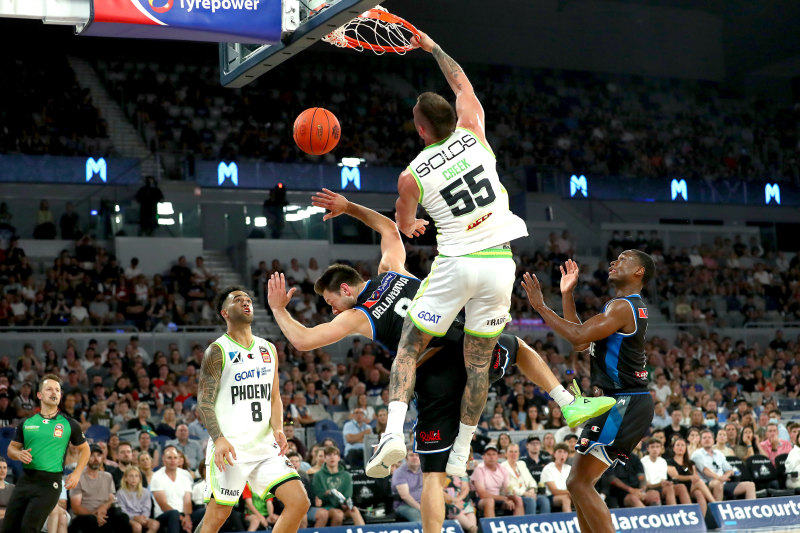 WITH the weekend just around the corner, its time to look towards the upcoming round of the National Basketball League (NBL). Round 12 will see some interesting matchups take place around the country, and with the standings once again changing after a blockbuster round last weekend, each clash carries a fair amount of significance and consequence. Kicking off the action for the round is a matchup between two of the competition’s biggest rivals in what should be a cracking contest.

Round 12 proceedings will begin on Thursday night, when Melbourne United take on the red-hot SEM Phoenix at John Cain Arena, and if past encounters are anything to go by, this should be a heated contest for fans to enjoy.

The reigning champions have been in and out of form of late, but have done enough to see themselves sit atop the standings after 11 rounds of action. They emerged victorious in what was a true test against the Wildcats on Saturday night, and demonstrated that if they are fit and firing, United will be a tough side to stop come finals time. They now wield one of the competition’s premier big men in Jo Lual Acuil, who has been on an absolute tear of late. If he can continue to combine with his team’s already established guards, then this is a side that could absolutely claim consecutive titles come season’s end. However, they face one of their biggest competitors tonight, so they will need to bring their best.

The Phoenix have been in some good nick lately, and look set for a strong tilt at the championship in the coming months. They were able to put a stop to the winning streak of the JackJumpers last Sunday, delivering a clinical second half to put the match out of reach and demonstrate their championship credentials. They come up against an even tougher opponent this week, and Round 11 saw the Kings prove too good for them, so United will be looking to that game for their opponent’s weaknesses. However, the Phoenix emerged victorious the last time these teams played, and they have the perfect matchup for Lual-Acuil in Zhou Qi and if Mitch Creek has overcome the bout of gastro that restricted him against Tasmania, then the Phoenix should be set with all the tools to dethrone last year’s winners.

The action continues on Friday night, with the Cairns Taipans travelling south to take on the Illawarra Hawks at WIN Entertainment Centre in what should be an intriguing affair given the recent form of the teams, and how entertaining their last matchup was.

The Hawks were finally able to get themselves back on the winners’ list last weekend, taking down the Taipans by six points in front of a hostile crowd. Their pure scoring power proved too much for their opponents, using their multiple avenues to generate a bucket whenever needed. They will be looking to repeat this effort, and will have home court advantage this time around. However, the Taipans will be able to make changes to their game after last weekend, so the Hawks will still need to bring their best. Hopefully, they can continue to get solid production out of guys like Justinian Jessup and Antonius Cleveland to keep their offence rolling.

The Taipans fell painfully short of claiming the upset win over Illawarra in Round 11, but will still be pleased with their endeavour throughout the contest. The injection of Scott Machado into the lineup proved crucial, with the star veteran back to his best with 16 points. There will be plenty for the Taipans to take out of this result as they look to make amends this time around. However, there will need to be some serious improvement at both ends of the court if they are to do so, but they have shown in the past to be a capable side, so why not?

The schedule rolls on to the following day with the South East Melbourne Phoenix hosting the Brisbane Bullets at John Cain Arena on Saturday evening. This will be the Phoenix’s second outing for Round 12, with the side concluding their round with this match.

The Bullets will likely still be hurting over Round 11’s heartbreaking loss to the Kings on Sunday afternoon, which saw them fall by just two points. They got extremely close to causing a pretty big boilover, but could not hold on for the win as the Kings overran them late. They will be looking to get back in the winning column this weekend, but face a tough task against the Phoenix. If they are to get the job done and finally claim an upset win, their offence will need to lift, and will need both of Lamar Patterson and Robert Franks to fire from the field. They have shown the ability to produce a winning score in the past, so they might fancy themselves here.

The second-match of the double-header will see the Sydney Kings play host to the Perth Wildcats at Qudos Bank Arena on Saturday night, which looks likely to pan out as a blockbuster clash, with the Kings charging towards the top-four of late.

Sydney was able to claim a pair of impressive wins in Round 11 as they continue their climb up the standings. They turned heads by taking down the in-form Phoenix last Thursday, delivering a composed and clinical performance to close-out a five point win against one of the competition’s strongest sides. They were then able to deliver one of the most remarkable finishes to a match a few days later when they defeated the Bullets by just two points. They will be looking to keep their winning streak rolling, but face a fired-up Wildcats side that is fresh off a loss. However, given the recent form of Jaylen Adams, there is every chance they will be able to sneak into the top-four with a victory here.

The Wildcats found themselves bested in Round 11 by a hungrier United side, and will be looking to make amends against the Kings. This marked their second win in three matches, so they will be looking to regenerate winning streak soon, given the strong form of the teams around them. It is competition-wide knowledge that if firing, the Wildcats are just about unstoppable and if Victor Law can bounce back from a quiet offensive game last week, then they should get back into form in no time.

Kicking off the next triple-header is the upcoming clash between the Cairns Taipans and the Adelaide 36ers on Sunday afternoon, with both sides looking to get back on the winners’ list. This will be the second clash of the round for the Taipans.

The 36ers stunned the league a few weeks ago by taking down the reigning champions with a big win, but could not back it up the following weekend as they suffered a loss at the hands of the Bullets. They were missing the services of a few key players, but have shown the capability in the past to take to the best sides in the competition, so they will be liking their chances here, especially if Dusty Hannahs is back and in the match-winning form he has shown before.

The penultimate clash of the round will see the New Zealand Breakers travel to Melbourne to take on United on Sunday afternoon. This will be United’s second outing of Round 12, as they close out their schedule for the weekend.

The inconsistent form of the Breakers continued last weekend, as they came off a tough loss to the Kings to produce a thrilling win over the Taipans. They will be looking to claim consecutive wins for the first time in a while this weekend, but will have to go through the reigning champs to do so. However, if they can get their defensive structures in place early, and big man Yannick Wetzell can continue his strong form of late, then they might be a sneaky chance to cause an upset.

The action for Round 12 will wrap up on Sunday evening, when the Illawarra Hawks play host to the Tasmania JackJumpers at WIN Entertainment Centre. This will be the Hawks’ second match of the round.

The JackJumpers could not continue their winning streak in Round 11, collapsing in the second half to suffer a 12-point defeat at the hands of the Phoenix. They will be eager to get back into the top-four as soon as possible, and that quest starts against the Hawks, who have been out of form over the last month or so. If the JackJumpers can produce the gritty defence they have shown over the last few weeks, and Josh Adams can keep firing from the field, they might just claim the road win in this match.