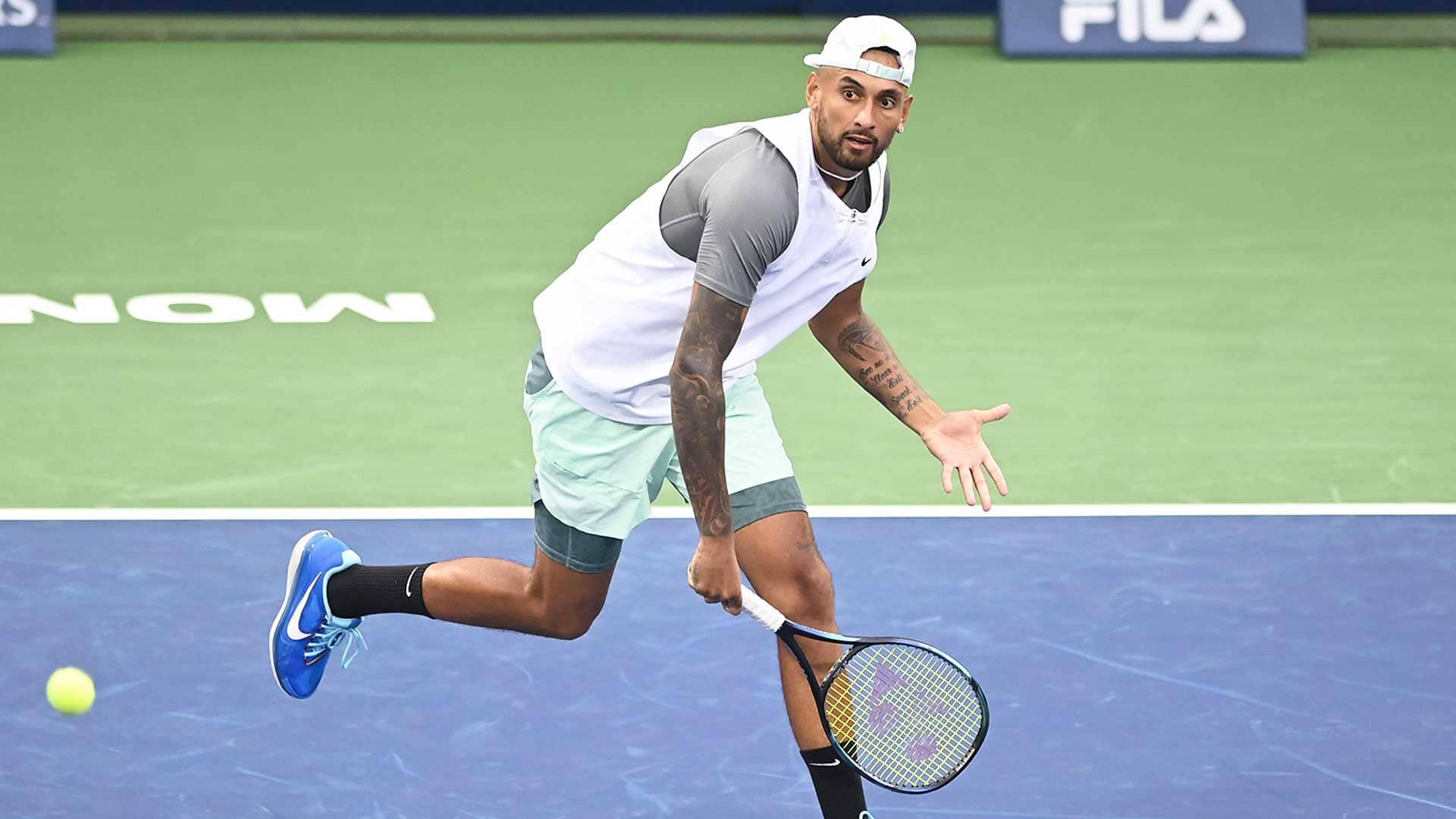 AUSTRALIAN Nick Kyrgios has set up a mouth-watering second round clash against world number one Daniil Medvedev at the National Bank Open in Montreal. The world number 37 – who is coming off a title at the Citi Open in Washington – is in red-hot form and disposed of Argentinian Sebastian Baez in one hour and 25 minutes in the opening round, 6-4 6-4.

The Round of 64 victory marked Kyrgios’ seventh straight win, and 12 of his past 13, with his biggest challenge ahead. Medvedev won last year’s US Open and will be keen to repeat the feat at Flushing Meadows this year, with the Montreal ATP 1000 event a terrific lead-up tournament for that. Kyrgios only served the six aces against Baez, but won 72 per cent of his first serve points and broke three times to one in order to secure the straight sets victory.

“Physically I feel fine. Mentally just so tired. I haven’t had much sleep the past couple of days, but I am trying to put that behind me already,” Kyrgios said post-match. “I am in Montreal and I haven’t played great tennis in Montreal in the past, so I wanted to come out here today and get that match up against Medvedev next. “It will be a lot of fun. “I just want to create some good memories in Montreal.”

The last time Kyrgios and Medvedev played was at the Australian Open earlier this year, where the Australian got under the skin of the Russian at times, but the world number one had the last laugh, winning in four sets. Despite the loss, Kyrgios still leads the head-to-head between the two, winning his previous two encounters against the Russian. Both Kyrgios (Citi Open) and Medvedev (Los Cabos) are coming off titles last week.

“Medvedev is a hell of a player,” Kyrgios said. “His style is so unorthodox, he is a great competitor and he is just an animal. “I am looking forward to seeing where I am at.”

In a huge day for the men at Montreal, all bar one seed made it through to the second round, with Spaniard Pablo Carreno Busta upstaging Italian Matteo Berrettini – the 11th seed – in straight sets, 6-3 6-2. Otherwise, Los Cabos finalist Cameron Norrie knocked out impressive American Brandon Nakashima, while Marin Cilic had to roll past Croatian compatriot Borna Coric in straight sets. Taylor Fritz, Diego Schwartzman, Roberto Bautista Agut, Grigor Dimitrov and Gael Monfils were the other seeds to book their spots in the Round of 32. Meanwhile Hubert Hurkacz became the first player through to the third round, toppling a determined Emil Ruusuvuori in three sets, 6-3 6-7 6-2.

Over in Toronto, the WTA 1000 event wrapped up its first round, with Coco Gauff, Belinda Bencic and Bianca Andreescu among the winners. Unfortunately for Tour favourites Emma Raducanu and Naomi Osaka, their runs ended in the first round, with Raducanu suffering a straight sets loss to Italian Camila Giorgi, while Osaka retired hurt three games into the second set against Estonian Kaia Kanepi. Australian qualifier Ajla Tomljanovic also made it through to the Round of 32, while third seek Greek talent Maria Sakkari became the first to punch her ticket into the third round with a victory over Sloane Stephens, 6-2 4-6 6-2.