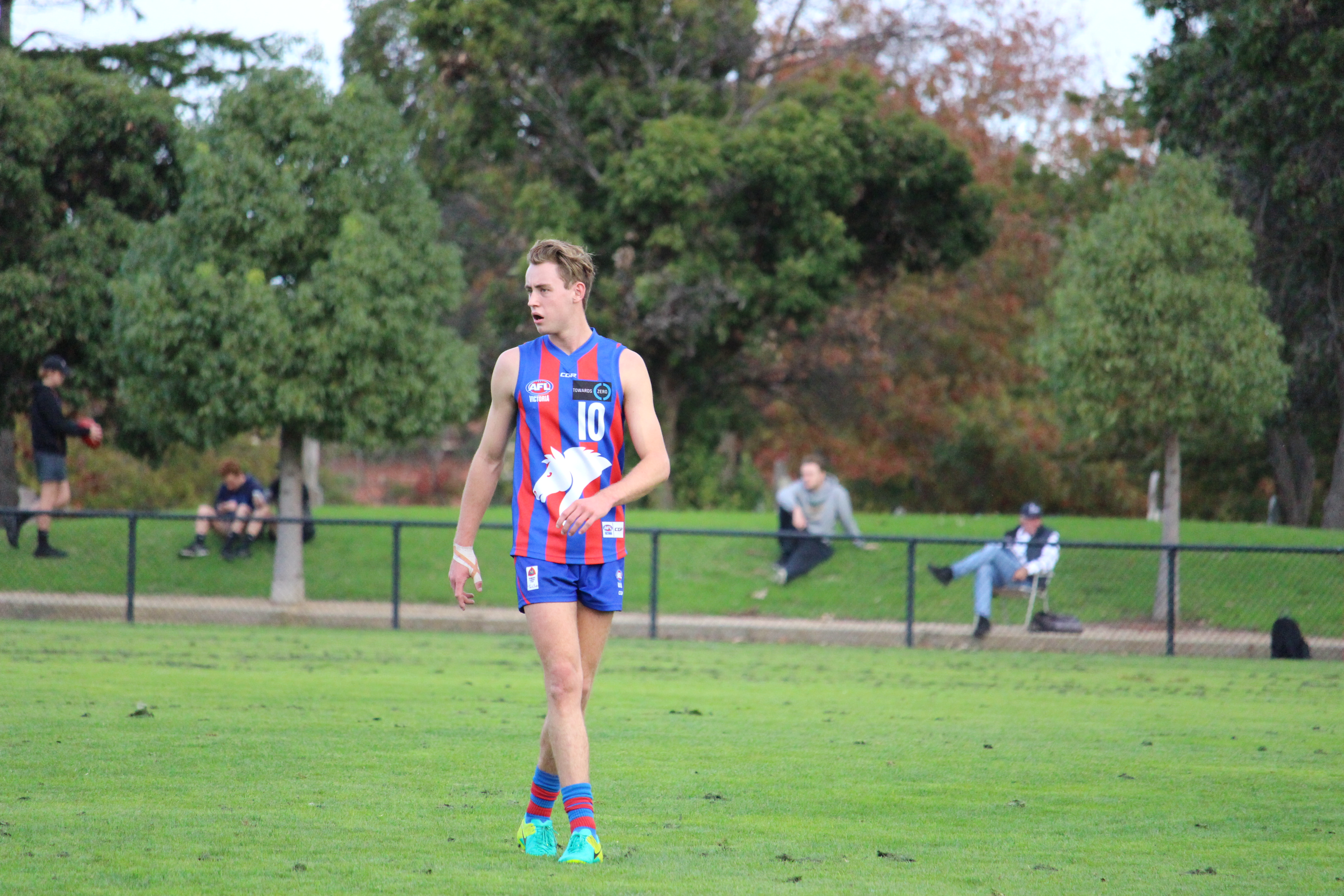 ROUND Seven of the TAC Cup continued over the weekend and we had scouts watching two of the games. Read their scouting notes below:

Dandenong Stingrays vs. Oakleigh Chargers (Peter Williams)
** – Note some players were wearing different numbers due to the special jumpers each club was wearing. The players original number has been used.

#2 Hunter Clark – A tale of two stories for the talented midfielder. Was really good in close, showing great vision by hand when under pressure in a stoppage, but was disappointing by foot on the outside. Had a few clangers when in space, but won plenty of the football and provided drive off half-back. Battled hard throughout the four quarters and showed some fierce tackling, earning each of his possessions. Was instrumental in getting the ball outside the contest.

#4 Reece Piper – Has electrifying pace and takes the game on, but got caught a few times trying to do too much. Showed willingness to take risks, and sometimes it paid off, but others it didn’t. At least tried to break the game open when Dandenong was stagnant at times. Kicked the first goal of the final term using his pace.

#26 Tom Murphy – The overager was solid across the ground. Provided good link-up between the middle and half-roward, took a good mark inside 50 in the first half but his set shot went wide. Showed good courage and reads the ball well in flight.

#29 Bailey Williams – Ultra impressed by the big bottom-age ruck/forward. Dominated the hitouts with his athleticism and ability to tap to advantage. Fairly athletic considering his build, and kicked Dandenong’s only two goals of the first half, and only three goals in the first three terms. Almost had another after a strong contested grab, but just missed in the third quarter, then capitalised with the last goal of the day to finish with four.

#38 Mitch Cotter – Buried himself under the pack and has the old fashioned “see ball, get ball” attitude. Charges at the ground level ball and gets his arms free to handball off in close. Cotter works hard fensively and gives as much as he gets. Really fierce tackler.

#8 Toby Wooller – Really good athleticism and turning circle. Had a highlight in the third term where he marked, spun around and hit up fellow forward Daniel Stanford. Spent some time in the midfield and used his bigger frame well. Really good overhead and leads to the right spots. An imposing player who just keeps getting better. Finished the game with four majors.

#10 Riley Jones – One of the better kicks in the league was once again on show, providing silver service to the Chargers’ forwards and was praised by captain Toby Wooller after the game. Wins enough of his own ball and uses it well when in space.

#13 Daniel Stanford – Presented well and showed good mobility with a clever snap. Constantly lead the football took some important marks and finished off with three goals.

#35 Jack Higgins – Finds plenty of the the football and has the skill to weigh his passes perfectly. Took a really good grab at centre-half forward in the final term where he rose above a couple of defenders to take a good grab. One of his better games for the season, booted four goals and showed some real talent with his scoreboard impact and score assists, hitting up short targets inside 50.

#37 Ed Michelmore – Has a good first few steps where he can burst away from opponents. Michelmore moves well across the ground and found the ball in all three areas of the field. Came off with an ankle injury early in the third term.

#69 Daniel Scala – A dangerous and exciting small forward. Scala slotted a goal from a set shot, then backed it up with an opportunistic snap just outside the square off the pack. A bottom-age player and stands at just 174cm, but has a vertical leap on him and that versatility inside 50 which adds a different dimension to the Chargers’ forward line.

#4 Aiden Domic – He was one of the best midfielders for the day. He had clean skills by foot and always drew opposition players to put his own teammates in better positions. Highlight of the day was quick clearance from a ball-up, where he ran and carried the ball and kicked from 35 meters out at full tilt – for a goal.

#9 Flynn Appleby – Stood up well from the backline knowing exactly where to stand when the Jets butchered the ball inside 50. He was strong with his marking and created a good starting point for the Rebels setting up to go into attack.

#23 Lloyd Meek – Great versatility being able to ruck and go forward as a key position option. Great above his head, good skills for a big man and was able to play as an extra midfielder when used for linking up throughout the ground. Really strong running patterns up forward when leading and positioning when in the ruck.

#25 Charlie Wilson – Presented well as a medium forward with strong tackling and had the ability to create forward pressure. Great right foot kick, with his two goals in the second quarter really standing out in how, through his own pressure on the opposition allowed him to create scoring opportunities.

#12 Connor Thar – Really solid link work throughout the midfield and generally hit his target by hand or foot. Worked hard to get to each contest and made good decisions when he had ball in hand.

#13 Matthew Young – Provided a strong target as a medium lead-up forward, rotated well throughout the midfield. Had a really nice pick up from the pack and snap from the pocket to kick a goal.

#20 Joshua Mould – Set up from half back quite well, ran and carried the ball, generally hitting the target by foot. Strong intercept marking on more than one occasion which created rebound opportunities.

#38 Buku Khamis – Provided a strong, leading target up forward. Was able to take multiple strong contested marks and was generally good at following the ball up if it came to ground. Very strong left foot kick for goal, on the run or set shot. Seem to also read the play well with solid leading patterns.

Weekend That Was – Round 7 – AFL Draft Central 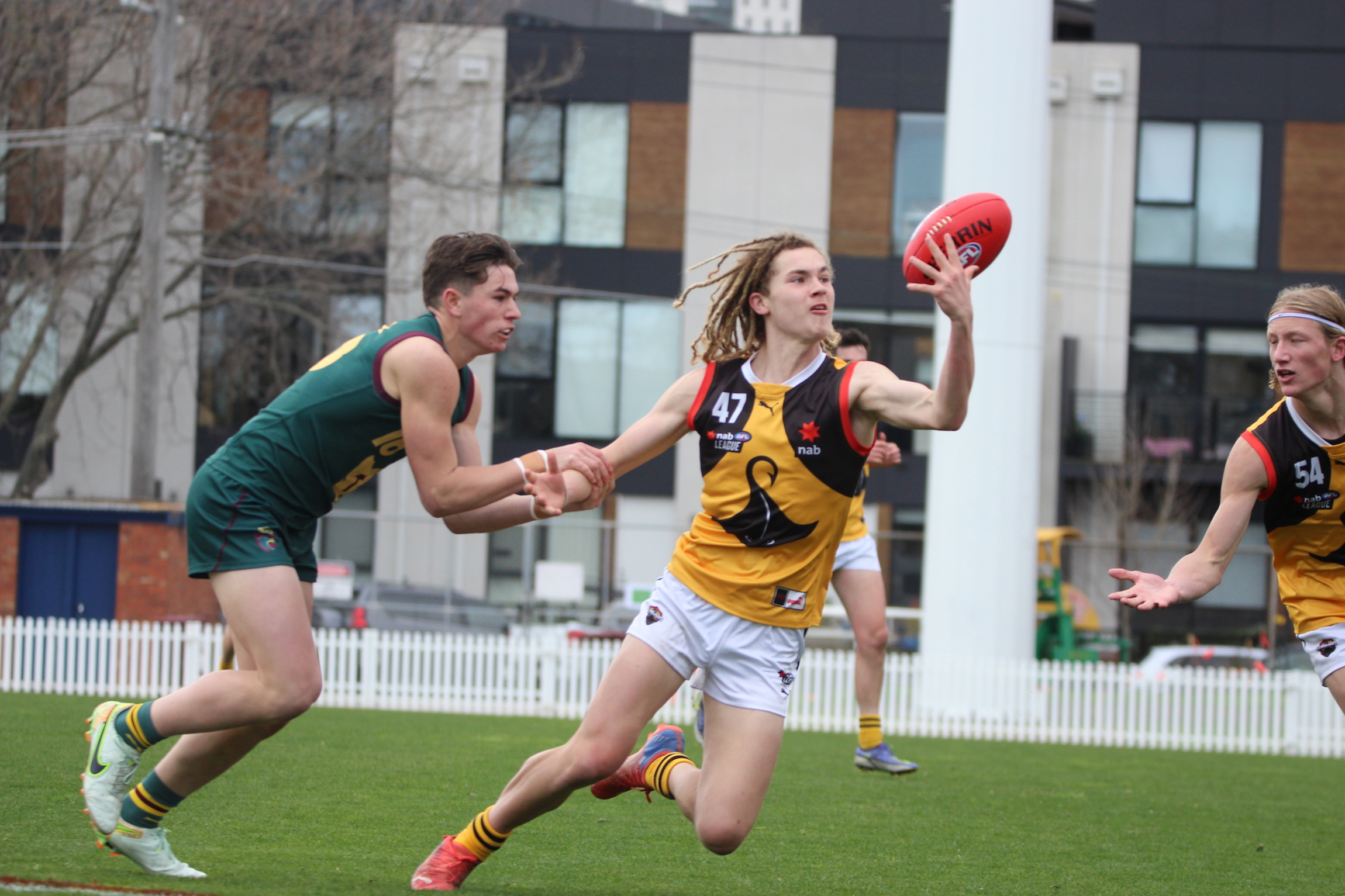