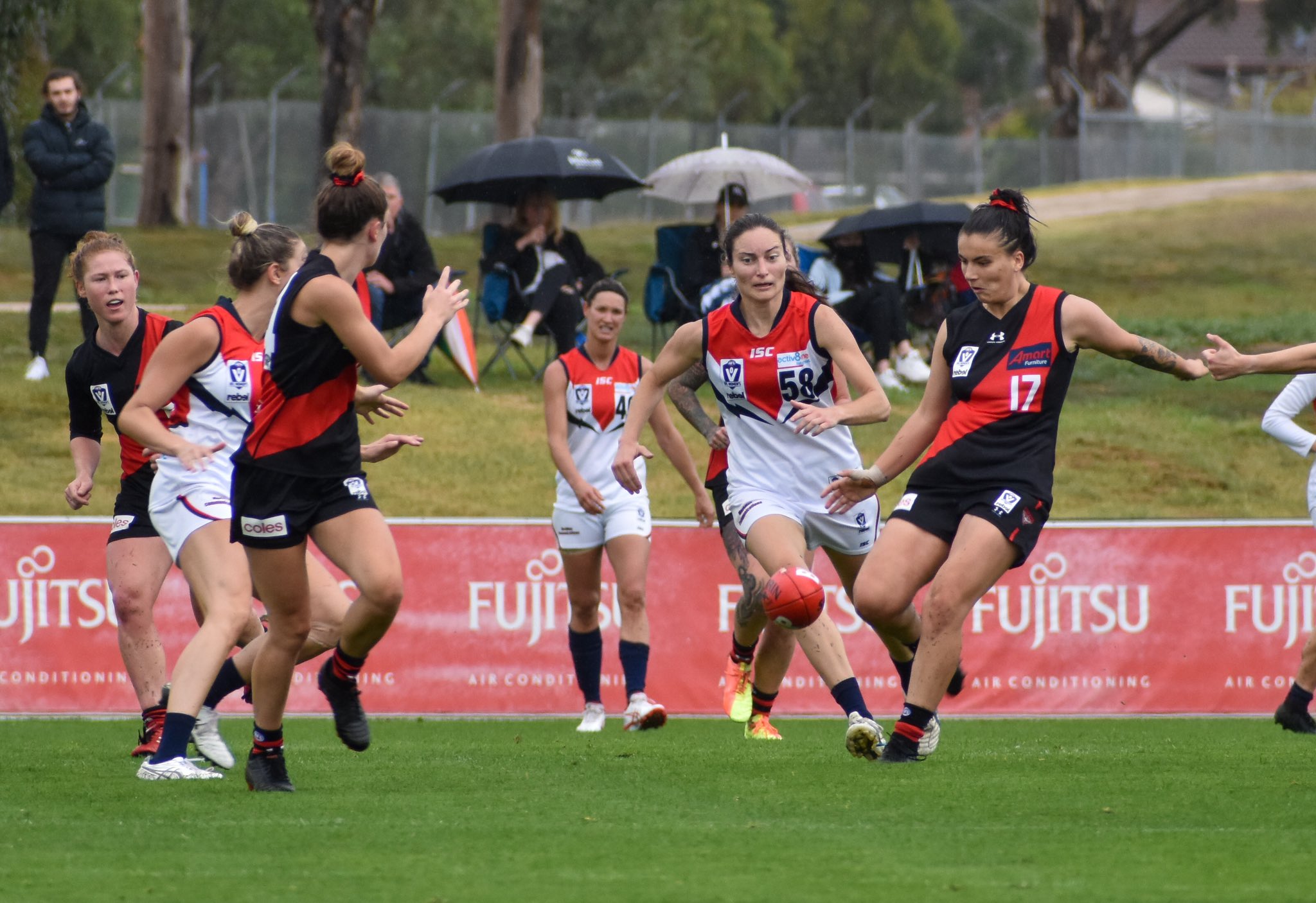 ROUND 4 of the 2021 Victorian Football League (VFL) season saw Essendon and the Southern Saints come away big winners, with the remaining four fixtures split by under three goals each. Competition frontrunners Collingwood and Port Melbourne kept their perfect records intact, while at the other end of the table Darebin is still searching for its first points in 2021. All that, and more in our weekend wrap.

Williamstown pulled off one of the upsets of the round on Saturday, claiming a 16-point victory over the Western Bulldogs at Whitten Oval. The Seagulls led from the first goal and built on a handy buffer throughout the contest, with their scoreboard pressure just enough to keep the Bulldogs at bay. Having lacked bite for much of the season, the home side could not find a way back in the 5.8 (38) to 3.4 (22) result.

Port Melbourne claimed a huge scalp on Saturday in what was arguably the biggest test of its inaugural season to date, defeating Geelong by 16 points at Deakin University. The Borough led at every break and managed to answer each late query the Cats posed, having held them to just one goal across the first three terms. To sweeten the 6.3 (39) to 3.5 (23) result even further, it sees Port extend its run atop the VFLW ladder.

Exciting youngster Sophie Locke continued her impressive transition forward with another bag of three goals to spearhead the Borough, while injury returnee Cleo Saxon-Jones was among a trio of Richmond-listed players to also hit the scoreboard. Michelle Fedele was Geelong’s sole multiple goalkicker with two, as Claire Dyett and Annabel Johnson were named best-on for their respective teams ahead of hosts of AFLW talent.

Casey Demons overcame deficits at the opening two breaks to trump the Southern Saints by 25 points on Sunday, solidifying their status in the top four. Having trailed by the narrowest of margins at half time, the Dees piled on three goals to nil in the third term, and prettied up the scoreboard with another in the fourth to run out comfortable 6.6 (42) to 2.5 (17) winners. Ultimately, the Saints had little answer for the onslaught in a goalless second half.

Niamh McEvoy continued her push for a senior recall as she booted two goals for Casey, joined in gaining plaudits by fellow dual goalkicker Tahlia Fellows. Skipper Samantha Johnson and Eliza West were also again among the Demons’ best. Saints youngster Renee Saulitis bagged one of her side’s two majors, as Alexandra Hynes backed up a strong outing last week and Madi Capsalis joined Deanna Jolliffe in the votes.

Carlton produced arguably its best performance of the season on Sunday, holding off North Melbourne to claim its second win on the trot, by eight points. With solid senior representation afield, the Blues put previous scoring woes behind them to come out strongly in that department, eventually notching their highest total to date and keeping the fast-finishing Roos at bay to come away 8.4 (52) to 6.8 (44) victors.

Boom recruit Akayla Peterson again found the big sticks and was among Carlton’s finest performers, as AFLW-listed players Serena Gibbs, Maddy Guerin, and Winnie Laing all featured in the votes. Courtney Jones and Stephanie Lawrence were also important with two goals apiece. Meanwhile, Brooke Brown booted four majors for North as she pushes her case for a senior call-up, while tall recruit Alexia Hamilton was also amongst it alongside Sarah Skinner, Katelyn Cox, and Ciara Fitzgerald.

Essendon inflicted this season’s biggest winning margin to date, notching a monster 67-point victory over Darebin at The Hangar on Sunday. A seven-goal first half set the Bombers’ ominous tone, as their scoring power proved much too strong for the Falcons, who now hold the unfortunate record of this season’s first goalless game. Darebin did get on the scoreboard, but hardly cut into the margin as it went down 10.10 (70) to 0.3 (3).

Bombers skipper Georgia Nanscawen and Alexandra Morcom kept their good runs of form going in the win, while Alana Barba was among a trio of multiple goalkickers and Grace Dicker proved promising in her return to VFLW action. Victoria Blackwood claimed full votes for Darebin ahead of leader, Steph Simpson as Vanja Smiljanic returned well and Gena Lawson-Tavan was also serviceable in the loss.

Collingwood kept its perfect record in tact on Sunday, but was made to earn a 15-point victory over Hawthorn at its spiritual home of Victoria Park. The Magpies booted as many goals as the Hawks had scoring shots, but were otherwise inaccurate and kept the travelling team’s hopes alive. Hawthorn could not quite take advantage and cut into the margin though, as the Magpies finished 3.10 (28) to 2.1 (13) winners in the round’s final fixture.

Senior-listed Collingwood players Maddie Shevlin and Amelia Velardo showed their worth at the level once again, as did Abbi Moloney with her major score. Hawthorn veteran Meg Hutchins was promised a wide variety of roles this season and found herself kicking a goal in her latest outing, before being named in the votes alongside the likes of Chloe O’Malley and Nicole Cormack.