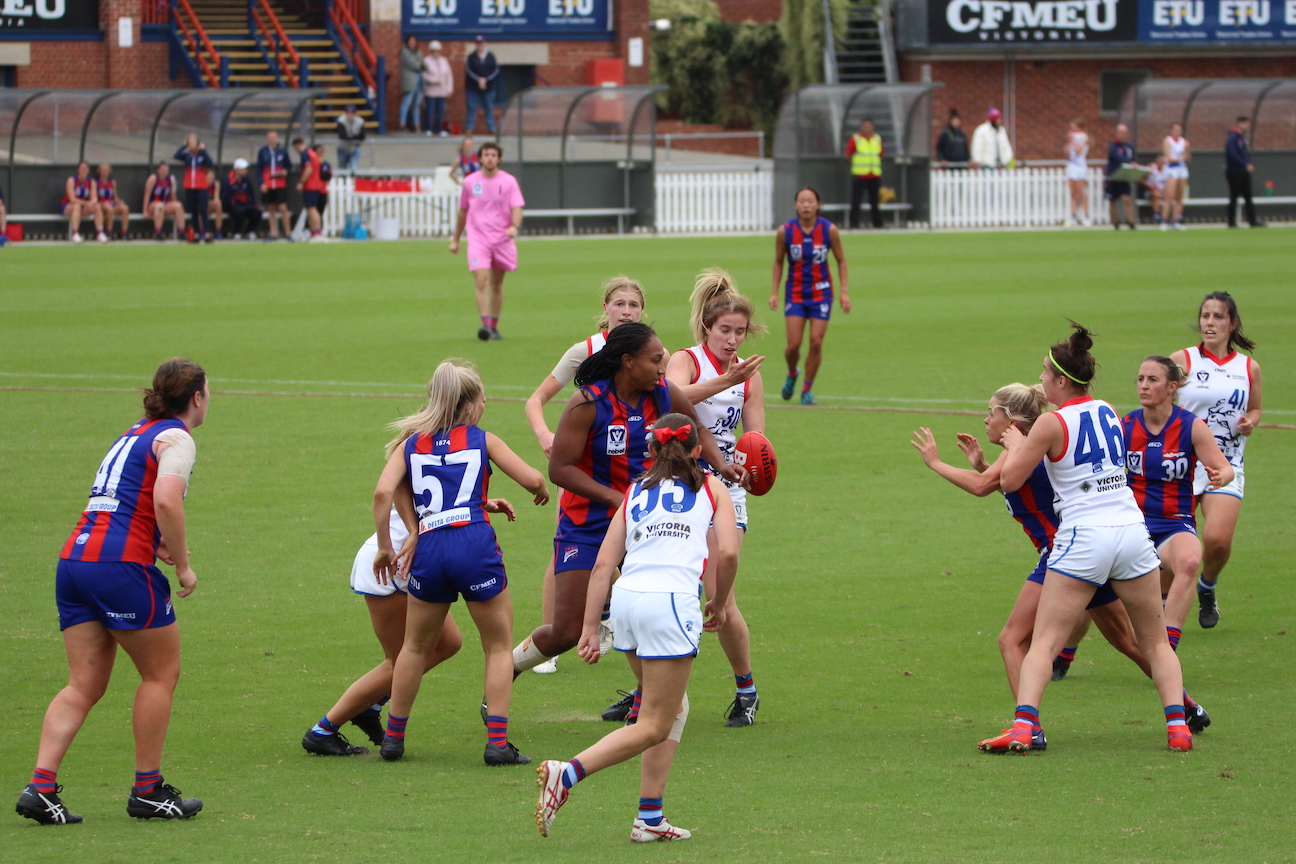 A BOTTOM two clash between Western Bulldogs and Darebin Falcons will see the winner escape the bottom of the table, whilst the Southern Saints and Collingwood clash for a second time and are set to have a beauty of a contest.

Despite Collingwood joining the rest of the Victorian-based AFL Women’s teams in being eliminated from the finals series, the Magpies have resisted massive changes to the state league side, with Bella Smith and Joanna Lin among those included in the forward half, with other existing AFL Women’s players including Maddie Shevlin, Abbey Green, Amelia Velardo, Imogen Purcell and Abbi Moloney in the team. They currently sit undefeated at the top of the table, with a tough clash down at Trevor Barker Beach Oval against the Southern Saints. Dandenong Stingrays tall Zoe Hill is set to make her debut for the side, alongside the likes of other teenagers in Alice Burke and Renee Saulitis who have established themselves in the side. Molly McDonald is a huge inclusion for the Saints at half-back to create some run, and with Tara Bohanna and Gabriella De Angelis up forward, the home team certainly has the capacity to inflict the Magpies’ first loss of the season. Eastern Ranges youngster Olivia Meagher is among the ones to watch in the black and white, as the Magpies eye off making it seven straight wins.

ESSENDON vs. WILLIAMSTOWN
Saturday, April 17 @ 11:00am
The Hangar

One of the teams looking to keep in touch with the top two sides is Essendon, after the Bombers came from behind to defeat Hawthorn last week at Box Hill. They managed to do it without star midfielder Georgia Nanscawen who succumbed to injury early in the match, and they will need to do it again without her, relying on the likes of Alana Barba, Courtney Ugle and Eloise Ashley-Cooper in the midfield. Bendigo Pioneers’ Elizabeth Snell returns to the red and black in a five-day turnaround from a successful outing for Vic Country, with Calder Cannons duo Kasey Lennox and Zali Friswell remaining in the side. Williamstown stand between Essendon and the Bombers’ fifth win, with the Seagulls not far off the top six despite having just the two wins from six games. The midfield trio of Ashlea Melnikas, Megan Williamson and Aimee Whelan will be hard to beat, with Scarlett Dunnell up forward and Erin Meade in defence among the others to keep an eye out for in the blue and gold. Even without Nanscawen, Essendon will be favoured to get up here at home, but the Seagulls will give them a run for their money.

Speaking of Hawthorn at Box Hill, the brown and gold are back again, this time hosting a Casey Demons side looking to bounce back having lost their past two games to the Magpies and Cats. The home team was able to include some AFL Women’s talent last week with the entire half-back line having that experience in Georgia Bevan, Tamara Luke and Nadia von Bertouch. However perhaps the most interesting inclusion is former Magpie Kristy Stratton who has been named on the bench after playing for the undefeated Pies throughout the season. Much like Luke and von Bertouch, she has moved to the Bec Goddard-coached Hawks. Up the other end, Meg Hutchins has been a terrific leader with some youngsters inside 50, such as Eastern Ranges’ co-captain Eloise Chaston who kicked the only goal for her side last week. Matilda Hardy is back into the team with Isabelle Khoury and Ruby O’Dwyer some Ranges to hold their places, while Northern Territory talent Dominique Carbone is another one to watch for the home team. For the Demons, Maggie Caris, Megan Fitzsimon, Mietta Kendall and Isabella Simmons are among the future of the red and blue having been picked up in last year’s draft, whilst Emma Humphries‘ experience is crucial, much like defender Alison Brown in the back 50. Casey should be too strong, but the Hawks will give it a red hot crack at home.

Some Vic Country youngsters will return for the Cats as they field their strongest side to-date in the Round 7 encounter against North Melbourne. The Cats will be keen to keep in touch with the top two, and should do so against a Kangaroos side that is 2-4 and coming off a loss to the previously winless Darebin Falcons. Annie Lee and Renee Tierney return to the Cats’ VFL Women’s side after playing on Monday, with the side well stacked with AFL Women’s talent. Rene Caris, Darcy Moloney, Laura Gardiner and Sophie Van De Heuvel in the midfield is the future AFL Women’s midfield, whilst Georgia Clarke, Olivia Barber and Stephanie Williams in attack makes the Cats a potent team when in transition. The Kangaroos remain without a great deal of AFL Women’s talent, instead focusing on the development aspect of the side with Amy Smith and Brooke Brown a couple of listed players in attack, while Sarah Skinner is always a threat inside 50. Molly Eastman and Tarni Nestor will try and contain the Cats’ forward line, while Katelyn Cox will have a great battle with Moloney and Gardiner throughout the day. Geelong should take the match fairly comfortably being at home with a pretty impressive outfit.

A potential match of the round at the other end of the ladder is the one between Darebin Falcons and Western Bulldogs, with both sides sitting at 1-5 for the season. A loss here will really hurt finals hopes, whilst a win keeps the victor in the hunt if they can build momentum in the second half of the season. Coming off a four-goal haul to help her side over the line, Stephanie Simpson will be looking for much of the same for the Falcons. It will be a tough ask against the strongest looking Bulldogs defence all year, with AFL Women’s talents, Eleanor Brown and Isabella Grant, the consistent rock in Simone Ruedin, speedy teenager Brooke Hards and natural ball-winner Katelyn Betts, both of the latter whom have moved into new roles of late. Up the other end, Nell Morris-Dalton has returned to the fold, with Gemma Lagioia and Amelia van Oosterwijck also there, and Isabelle Pritchard rounding out the AFL Women’s contingent. For the Falcons, ex-Bulldog Nicole Callinan was impressive in her first game back and will be a key player in the defence alongside consistent defender Gena Lawson-Tavan. Up the other end, Alyssa Mifsud kicked three goals a couple of rounds back, so between her and Simpson, they have the potential to put some high scores on the board, while Calder Cannons’ Peppa Poultney is another youngster in the side. The Western Bulldogs side is arguably the strongest of the year and should take care of Darebin, but the Dogs cannot afford to take the Falcons lightly.

Port Melbourne will look to continue its winning streak up against Carlton at ETU Stadium, with Cleo Saxon-Jones named at full-back this week. Up the opposite end is Sabrina Frederick who slotted two goals on debut against Western Bulldogs last week, and will look to provide the smalls of NAB League-listed talents Kate Adams and Taylah Morton in there, whilst Mel Kuys through the midfield is a crucial player. Ex-Carlton talent Bridie Kennedy is back into the side to take on her former team, while Pip Peschke and Courteney Bromage are other key midfielders to watch. Carlton has got a solid contingent of AFL Women’s talent in the team, with Serena Gibbs, Courtney Jones and Winnie Laing all named inside 50, while Charlotte Hammans and Maddy Guerin are up the other end. Akayla Peterson has been named in the back pocket in the opposite side to Ally Bild in a strong last line, while over-age talent Amber Micallef and ex-Northern Knights speedster Marnie Jarvis are also in the side, named on the bench. Port Melbourne should have too much about them at home, but the Borough will be wary of a Blues outfit wanting to lift their efforts from last round when they went goalless against the Magpies at Victoria Park.

OVER the past few weeks, Rookie Me Central has named 23 players aged Under 23 at the start of the 2023 calendar year to keep an eye on. Having completed that list, the 23 players – who range from being 16 up to 22 – are all able to be found below, with links to […]