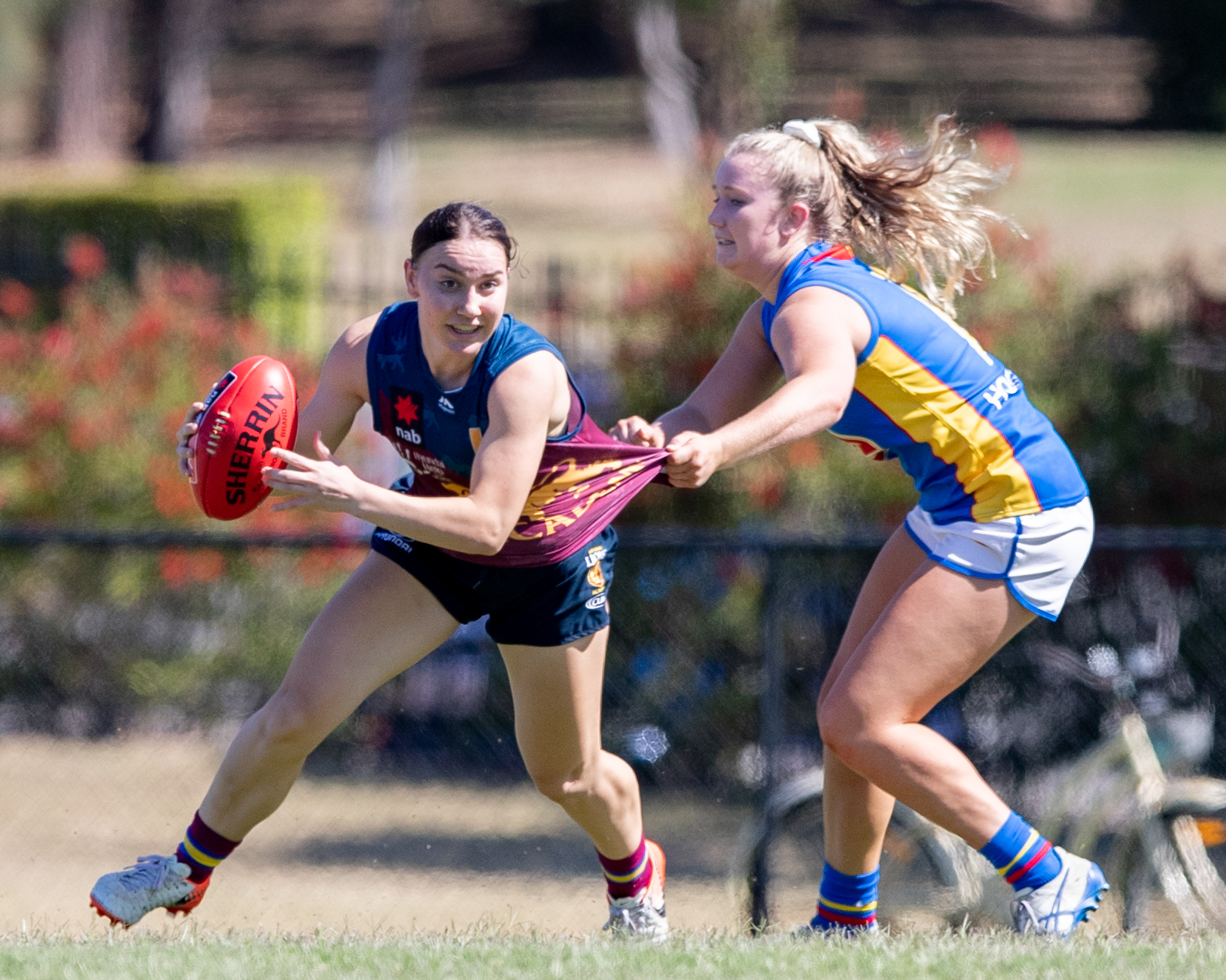 IN a midweek training hitout, Queensland’s best and brightest young stars took to the field against Queensland Australian Football League (QAFL) Women’s side Coorparoo in a match prior to their AFL Women’s Under 19 Championships campaign. The Queensland side defeated Coorparoo 12.10 (82) to 0.2 (2) in a one-sided contest, in four 15-minute quarters with no goal umpires. We took note of some of the Top Performers of the Queensland side for the winners. All notes are opinion-based of the writer.

Might have the best hands of anyone going around, with absolute lightning handballs in close that not only set up one goal, but two goals in the second half. First was a great handball to keep it in in the third term on the boundary line to get it to Lily Tarlinton for a major, then the next term she barely breezed past it with a slick handball to Abby Hewett for a goal. Her running out of midfield going forward, and her footy IQ and smarts were incredible and she is the type of player you want the ball in the hands of all day, every day.

Strong at the contest playing on the inside, she sometimes rushed the disposal when moving, but her contested ball ability was outstanding. She just ripped the ball at ground level to clear it, and kept winning it in close using her bigger frame to advantage. She proved hard to bring down in a tackle and charged at every stoppage, and even had a chance on goal through a snap in the third term.

If Pauga’s hands are among the cleanest going around, then Levi’s vision and kicking are right up there with anyone in the draft crop. Twice she stopped, propped and looked inboard with a slicing pinpoint pass to open up the game and hit a target, including setting up a goal to Lily Tarlinton. She has the inside ball-winning ability to match her decision making and cleanliness, able to win clearances and get it forward, bullocking her way through traffic. She did bite off too much at one stage in the fourth term, with multiple Coorparoo players dragging her to ground for a holding the ball call.

Did not have a great deal to do in defence, with some good defensive pressure early, but had a quieter game due to the circumstances of the way the match went, but still got around and provided effort.

A nice little pocket rocket who slotted two goals on the day, with the first being a clever snap in the pocket midway through the second term, and another one from a clean kick on the run early in the fourth quarter. She worked hard up the ground to help run the ball out of defence later in the fourth quarter, and positioned herself well when the opposition was in possession.

The bottom-age talent really showed promising signs as a player for next year, missing a couple of chances before becoming third time lucky midway through the second term. She had an early shot on goal which missed to the right, then laid a great tackle, had a clean snap but also missed to the right in the second term, then finally snapped truly at the 12-and-a-half-minute mark. She showed clean hands at ground level, and whilst she did drop some marks, has some great promising signs for the future.

Provided the run and carry in transition that broke down the opposition’s defensive zone, and was not afraid to take the person on the mark on. She shrugged off an opponent early in the match, then had a few touches in the third term getting it forward, and almost sold herself into trouble in the last running towards goal, but managed to get boot to ball.

Three goals on the day for the clever bottom-age forward. She kicked her first in the opening term, sliding in 30m out to mark and nail the set shot without ever looking like missing. She almost had a second not long after with a clever snap off hands, but it missed to the right. A quieter second term was followed by a huge third quarter, as Sheridan booted two goals in two minutes, both within 20m of the goal, including one as a crumb in the goalsquare. Very clean at ground level and an exciting talent for next year.

Provided great running along the wing to get the ball forward, and had a particularly big second term with her ability to win it on the wing and drive it forward. She had a set shot on goal from 40m out following a 50m penalty, but it fell short and hit an opponent’s back. She worked hard in transition even when she did not win it, so was an exciting one to keep an eye on.

Another bottom-age standout who played well off half-back and pushing up the ground, Fletcher used the ball fairly well aside from one poor effort in the third term. She took some great intercept marks and then produced a lovely kick from the middle going forward to set up a scoring opportunity for her team.

Sensational kicking, she was able to nail a terrific pass from the wing into the middle in the second term, and then had a number of repeat entries in that quarter which led to an Abby Hewett goal. She used good bodywork one-on-one and was able to pump it inside 50 in the third term to set up another major for a teammate.

Just as impressive as her sister, Litonya possesses some high-level traits such as her vision to kick to the wing to hit a target under pressure. She ran hard all game long and showed good strength in the forward half, using clean hands to shovel it out to teammates, as well as a nice kick going inside 50 following good bodywork one-on-one in the third quarter. She lead out in the fourth term using her speed to mark, then turned and hit-up Lily Tarlinton with a great pass.

Had a really busy start to the game and kicked the opening goal very early in the match thanks to a clever kick in play that bounced through the open goal with no defenders there. She produced a lovely low bullet to Brooke Sheridan to set up another goal for the Queensland side and had another chance herself in the third term. She charged through a forward 50 pack to get the ball out by hand, then was thrown into the ruck in the fourth term for something different.

Used her size and experience inside 50 to be the dominant target for the Queensland side. She slotted three goals and realistically should have had five, which showed how much of an impact she had. Whilst being a target early, it was a great mark of a pinpoint pass from Teagan Levi that set up her first goal, a set shot straight in front. She kicked her second from a snap exactly a quarter later, then finished off with her third – also a snap – later in the term. Tarlinton showed she could produce at ground level as well as on the lead, taking a strong mark in the fourth term 35m out but her set shot was touched on the line. She had a chance late in the game to snap her fourth, but opted to handball to Macie Brown for a goal.

The Davies sisters in Giselle and Fleur both had some nice moments at respective ends, with Fleur providing a target up forward and having a couple of chances, while Giselle held up strong in defence. Alongside her, Lucia Liessi tried her best with providing run though not needing to do a great deal, while Ella Smith, Imogen Evans and Kalista-Jayne Shiner showed promising signs through midfield, and Macie Brown and Keyshia Matenga were lively inside 50.