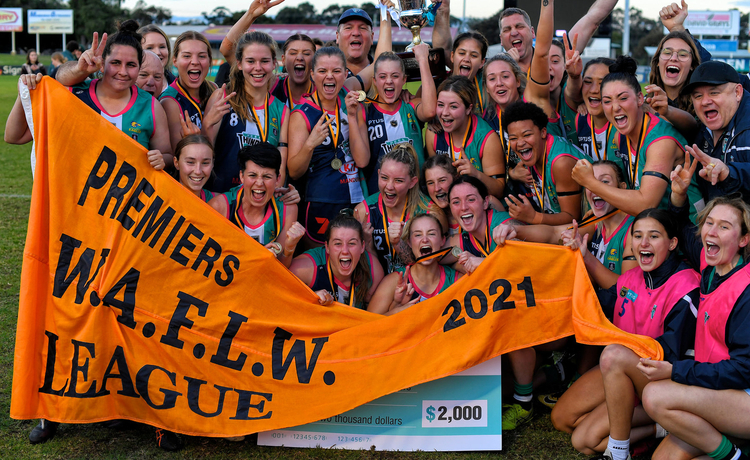 REIGNING back-to-back premiers Peel Thunder will eye off a remarkable third straight flag in the 2022 West Australian Football League (WAFL) Women’s competition. The Thunder navigated the postponed 2020 season to make the unthinkable rise from wooden spooners to premiers, then did it again last season after sitting just one game off the top from Swan Districts, but pouncing when it counted. Despite losing to the black and whites earlier in the season, the Thunder would go on to inflict the minor premier’s only three losses for the season in the final five games, saluting in the one that counted.

Looking to 2022, and Peel Thunder have plenty of talented players across every line, from youth to experience. From an AFLW Draft perspective, Ella Roberts is the premier top-age player across the country, having starred at League level since she was 14-years-old, and winning the Most Valuable Player (MVP) award at last year’s AFL Women’s Under 19 Championships. Set to once again star for the Sandgropers this season, she will be returning alongside Bella Mann and Emily Gunton. Other players set to represent the Sandgropers at Under 18s level are Megan Bain, Kaitlyn Srhoj and Jordain Thompson.

Though the Thunder have seen Courtney Rowley and Beth Schilling step up to the elite level, the Thunder still ave quality across the board when the pair is not available. Kate Bartlett is the most damaging forward in the league, booting 38 goals from 17 games, ahead of the experienced Kira Phillips (23) and Roberts (14). Among the other starts to keep an eye on, Cassie Davidson, Ebony Bilcich, Lauren Quaife and Ebony Dowson played every game last year, whilst youngsters Tanisha Anderson, Gracie Fenton and Jaide Britton are among the other regular contributors to stand up in their respective areas of the ground.

Peel Thunder will unfurl the flag against Subiaco at the newly named Lane Group Stadium in Round 1, one of three home matches to start the season alongside a bye. The Thunder’s first grand final rematch comes in Round 5 when they travel to take on Swan Districts, before facing them twice in three weeks later in the year.