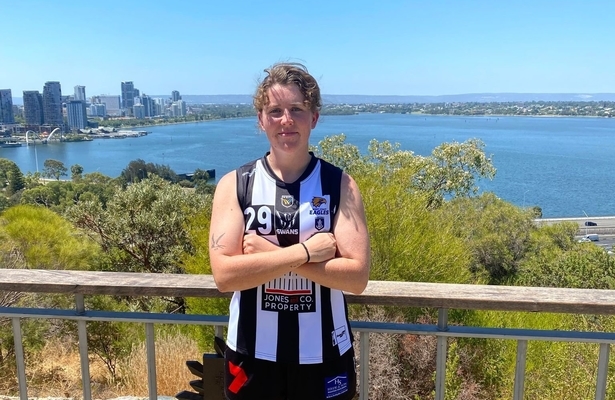 HOPING to go one better than last year, Swan Districts will once again be there at the pointy end of the 2022 West Australian Football League (WAFL) season. The Swans started the 2021 season on fire, winning 13 games straight, but then dropped three of the next five – all to Peel Thunder – to go down by 21 points in the decider. Now heading into a new season, the Swans will be on a mission to take that next step and dethrone Peel Thunder.

Swan Districts has long been a ‘footy factory’ of sorts for the youth of the state, and last year saw the rise of Dana East bolt from a virtual unknown to an established midfielder in one of the AFL Women’s top sides. Along with East, tall talents Sarah Lakay (West Coast) and Sarah Wielstra (Fremantle) also made their way up to the elite level. Among those in the black and white stripes at AFLW level are Fremantle’s Mikayla Morrison, Mikayla Hyde and Stephanie Cain, and West Coast’s Imahra Cameron, Shanae Davison, Kellie Gibson and Mikayla Bowen among a bevy of incredible players.

Swan Districts has a new captain this season in young talent Jessica Cox. It is fitting that she leads a continually evolving young side, that features plenty of current and future draftable prospects, as well as readymade mature-age talents. Looking this year, winger Tara Stribley is the top talent, already having represented Western Australia at State Under 19s level, she is in her draft year and the Bassendean prospect has the athleticism that catches the year. Other top-age talents include Abbygail Bushby, Olivia Cripps, Kloe Taylor and Chanel Jetta. From a future perspective, Jaime Henry had an outstanding debut season last year and is a bottom-ager to keep an eye on this year.

Not just a youth-filled side, the Swans have plenty of experienced talents too. Ex-AFLW listed Emily McGuire who handed over the reigns to Cox is incredibly strong at either end, but has become renowned for her booming kick out of defence. Aimee Ralph and Fi Boucher are other experienced targets, whilst Eliza Gelmi is another one who hardly puts a foot wrong. Over-agers Emma Nanut and Mel Hardy are among those who missed out on being picked up last year, but were in the mix, and will be looking for big years.

Swan Districts opens its season against Claremont on the road, and plays its first home game against newcomers West Perth in round 3. The 2021 WAFL Women’s Grand Final rematch will take place in Round 5, with the other two clashes against Peel Thunder coming late in the year in Round 14 and 17 before a bye in the last round prior to finals.