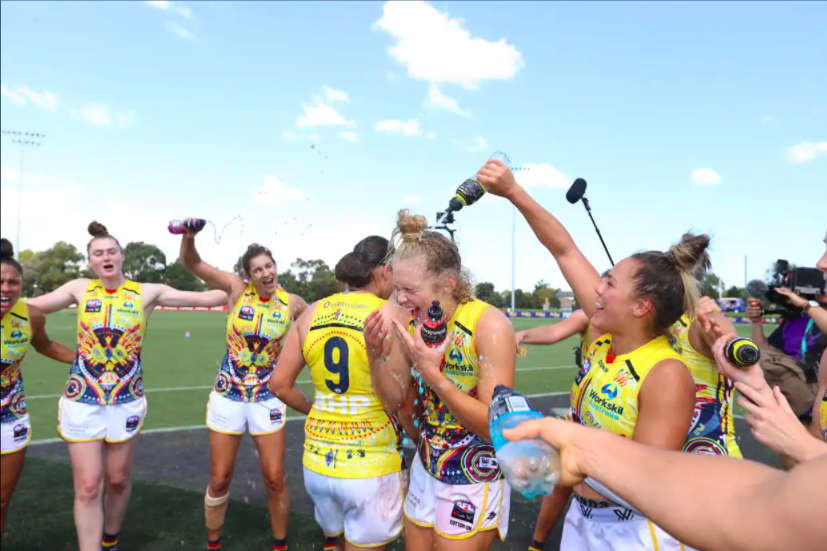 ADELAIDE unveiled the only AFL Women’s debutant in Round 10, blooding a highly touted tall on the eve of finals. We take a look at how those in their debut campaigns performed this past weekend – either first-year players, or those who were yet to make their AFL Women’s debut despite being on a club’s list prior to 2022.

Greater Western Sydney and Geelong bowed out of season 2022 on Friday, with the Giants picking up their fourth win of the year on the road. Both sides have blooded their fair share of fresh faces throughout the campaign, and that was no different in this clash.

Three first-year Giants registered nine disposals, in Brid Stack, Ally Dallaway and Emily Pease. A consistent figure all season, Dallaway also notched 10 tackles and four clearances among her haul, while Stack and Pease combined for 14 tackles. Young gun Jessica Doyle finished on a high with two goals, and Casidhe Simmons laid as many tackles in the win.

Collingwood locked in its finals spot with a comprehensive 38-point win over Richmond on Saturday, with one particular rising star continuing to shine. That player was Eliza James, who has been the Magpies’ standout draftee for 2022 and continued her exciting maiden campaign with nine touches, three tackles and a goal.

James’ 2021 Vic Metro Under 19 teammate, Emelia Yassir turned out for the Tigers, laying five tackles – a feat matched by mature-age top-up player Meg Macdonald. Speaking of mature-agers, VFLW recruit Meagan Kiely capped her season with seven disposals and a couple of marks in the yellow and black.

North Melbourne will enter its finals campaign on a high, after downing West Coast to the tune of 39 points on Saturday. The Kangaroos had just one first year player afield, with 2022 mainstay Jasmine Ferguson running out for her ninth game and contributing 13 disposals and five marks.

The Eagles, who took out this year’s wooden spoon, continued to blood young talent. West Australian state academy products Charlotte Thomas (10 disposals, five tackles), Sarah Lakay (14 hitouts), Courtney Rowley and Emily Bennett all got some more valuable experience under their belts, having been tested at the top level early in their top flight careers.

Carlton’s late season surge almost claimed a prized scalp on Saturday night, but the Blues fell a single point short of snatching points off Melbourne. The Dees promoted Eliza West from their VFLW ranks last year, and it has proved a masterstroke. The midfielder had another 14 disposals (13 handballs), seven tackles and three clearances, joined by first year tall Tahlia Gillard in the side.

The Blues were served well by newly blooded talent in 2022, and they continued to be in their final outing for the year. First round draftee Keeley Sherar (14 disposals, six tackles, one goal) was superb, as was ruck-forward Jess Good, while Courtney Jones got busy despite not hitting the scoreboard, and Paige Trudgeon played her part once more.

Adelaide unearthed the only debutant for the round, in highly touted tall Zoe Prowse. The first round draftee out of Sturt contributed seven disposals and laid a couple of tackles in her side’s 39-point win over St Kilda on Sunday, having been made to wait her turn to crack the Crows’ formidable lineup. McKenzie Dowrick also made her club debut in the win.

Meanwhile, St Kilda’s lacklustre season came to an end with its eighth loss, but the Saints’ two wins and competitive outings serve as fuel for their next campaign. Top draftee Ella Friend (12 disposals, three marks) turned out for her seventh game in red, white and black, joined by 2021 Vic Country Under 19 teammate Ashleigh Richards once again.

Brisbane’s breakneck attacking speed proved far too much for the Bulldogs’ bark on Sunday, as the Lions ran out 32-point victors to bring great momentum into their finals series. While there were no first-year Bulldogs afield, Brisbane had three 2022 debutants run out in the maroon, blue and gold.

Electric forward Zimmorlei Farquharson had her moments and provided a spark with her goal in the first term, while Lucinda Pullar laid six tackles and managed as many touches of the ball. Ruby Svarc also played her part, with competition for spots set to be intriguing once the Lions’ postseason gets underway.

Fremantle notched a confidence boosting win ahead of finals, downing Gold Coast by 37 points to see out the regular season. As has been the case all season, the Dockers fielded a bunch of fresh talent and all of them had a part to play.

Irishwoman Aine Tighe and VFLW recruit Airlie Runnalls found the most ball with 12 disposals each, followed closely by midfielder Dana East who snared 10 and laid seven tackles. Along with Tighe, Sarah Wielstra hit the scoreboard with her first senior goal, with Maggie Maclachlan also keeping her spot after a late-season debut, and mainstay Jess Low (four marks) continuing to cement her spot in the side.