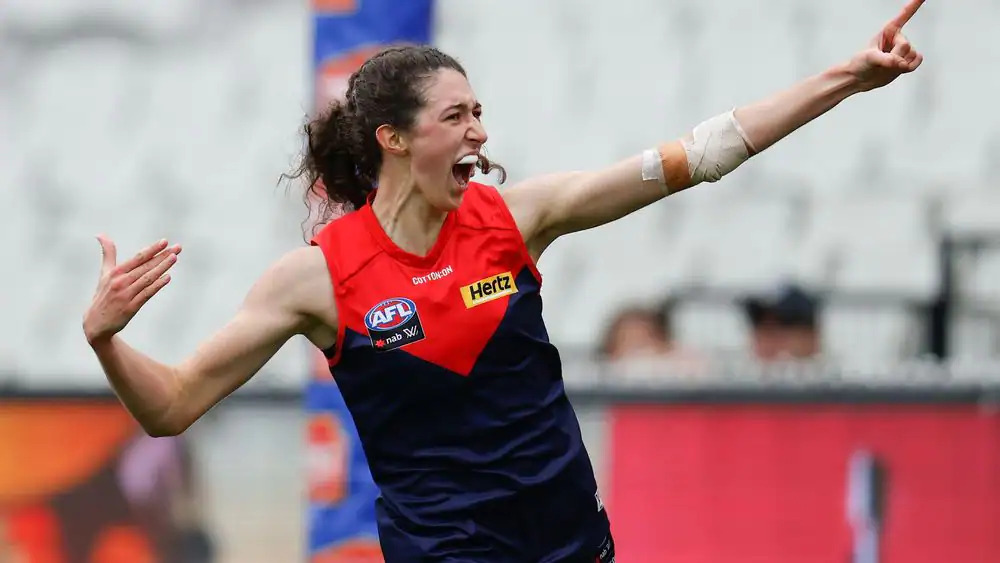 THE 2022 AFL Women’s Grand Finalists are set after both Melbourne and Adelaide booked their spots in the decider following wins over Brisbane and Fremantle respectively yesterday.

Melbourne has booked its place in the AFLW Grand Final for the first time, after the Demons defeated Brisbane by four points at the MCG.

After a stellar third term from the Dees, Brisbane came back at them in the last term but ultimately could not run over the top of them.

After so many almosts, the Dees have finally made the big dance

The Dees have been one of the most consistently high performing sides across the history of the AFLW, but for one reason or another have never gone on to make the big dance. Well that has finally now changed.

Melbourne will play off in its first Grand Final next weekend and will be aiming to make the most of the hard fought opportunity.

In arguably a best on ground performance, Alyssa Bannan was an absolute star up forward for the Dees, and the big open spaces of the MCG were the perfect opportunity for her to show off her pace.

She ultimately finished with three goals, with many of them coming after she burst away from a pack and into an open goal.

In what was her 50th game in the AFLW, Karen Paxman was an absolute workhorse through the middle of the ground, particularly early on. She was absolutely everywhere, getting Melbourne out of a lot of trouble and setting up a lot of attacking play for her side.

She went a little quieter as the match dragged on, but her early work ensured the Dees stayed in the contest, even though Brisbane were certainly not making things easy.

Shelley Heath once again proved height is only a number

Shelley Heath has been playing out of her skin for weeks now, and her preliminary final performance was just another example of her proving that height is just a mere number.

She was constantly matching it with much taller opponents and from the way she was playing, one would not think she is only 160cm.

Phoebe Monahan the star in a tough loss

Now yesterday’s loss was a tough one for all involved at the Lions, but one player that stood up was Phoebe Monahan. She had the tough task of keeping Tayla Harris quiet, and for the most part she did. She wore Harris like a glove, spoiling many a marking attempts for Harris and in general just making life very difficult for Harris.

Adelaide is through to yet another Grand Final, after defeating Fremantle by 14 points.

Adelaide led all afternoon, but it was never a comfortable lead. Fremantle did kick the first goal of the last and was starting to build some momentum, but one last goal from Ashleigh Woodland halted any Docker hopes and ensured a Crows victory.

Adelaide are through to the Grand Final… again

Adelaide is through to another Grand Final, and will be keen to write the wrongs of 2021. The Crows are through to their fourth Grand Final and are aiming for their third flag, but do face a new opponent for the first time in Melbourne.

One Docker that had an unusually quiet games was Roxanne Roux. She did not get a touch in the entire first half, and took until partway through the third term to finally get one to her name. She ultimately only finished with the four touches.

That weirdest goal in the history of AFLW

At roughly the 10-minute mark of the second term, Adelaide kicked what was arguably the weirdest goals that fans may ever see in AFLW. Erin Phillips had a shot for goal which the Fremantle defenders thought had bounced over the line, but it actually had not. It then bounced to Ashleigh Woodland, who realised what had really happened, and converted around her body.

Adelaide is a much talked about star-studded line up, and their usual suspects all played starring roles in yesterday’s win.

In the midfield, Anne Hatchard and Ebony Marinoff ran amok. They both got over 20 disposals and created a lot of run and carry, and attacking forays forward for their side.

Although she only had 13 touches and only kicked one goal, Erin Phillips was still dangerous up forward for the Crows and was creating plenty of chances in that Crows’ forward line.

Although a Crows victory was never really in doubt, the final stats do not quite tell the same picture. For one thing the Dockers had more of the ball (241 disposals to 207).

The Crows had three more hitouts than Fremantle, but the Dockers had only had one less clearance than the Crows did.

The real telling stat though is the Inside 50 related stats. The Crows had seven more inside 50s than Fremantle, but had double the number of marks inside 50 then Fremantle’s final tally.