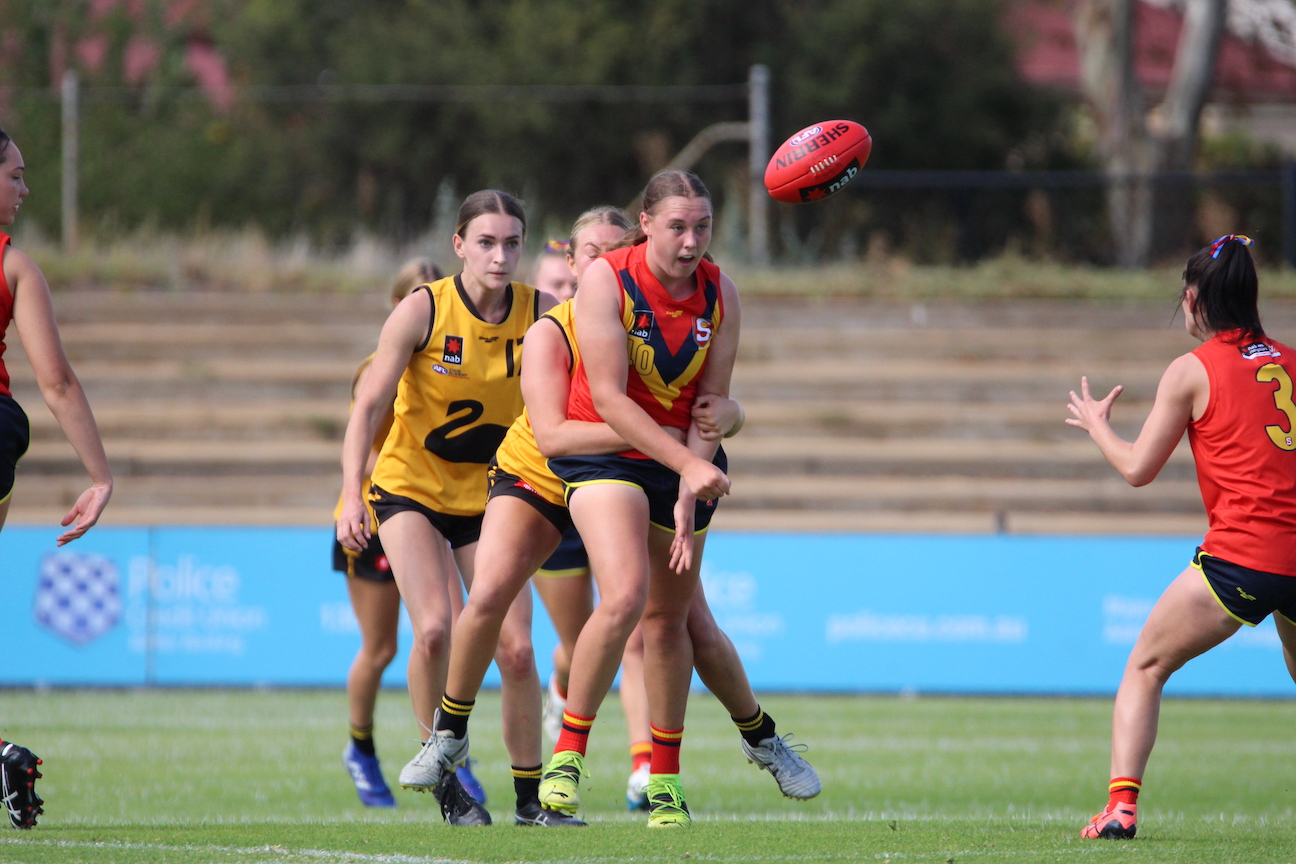 ONE of only two over-age players in the South Australian side, Woodville-West Torrens‘ Ella Little is making the most of a second chance in many ways. Originally from the Glenelg zone, Little played her football at Morphettville Park – after coming to Adelaide from the country – and is now one of the key midfielders at the Eagles after she was specifically picked out y new coach Narelle Smith, who was involved with the Bays’ development program when Little was there.

“I started playing footy when I was about eight,” Little said. “Down at a club in the country called Mt Burr Football Club and I was the only girl in the whole league for a few years, and then I moved clubs and started playing at Millicent Football Club and that’s where I started getting more recognition and went and did the Glenelg Super Statewide Shield in the Under 14s to Under 17s and was lucky enough to do the Crows Academy.

“Then last couple of years been playing at Morphettville Park and then turned 18 and Narelle Smith picked me up at the Eagles so I was no longer zoned to Glenelg, so I went over to Eagles.”

Though Little might have been a shrewd decision for Smith and the Eagles to pluck out of local football, the big-bodied utility has always been thereabouts. Trying out for the State Under 16s side, Little missed the cut, but Talent Manager of Female Programs Robbie Neill said the state coaching staff had not forgotten about her and would continue to track her progress over the next few years. Neill said she always had talent, it was just about applying it, and Little conceded that she needed to make changes if she was going to get serious about her football.

“Back then I would consider myself a bit of a lazy footballer, just didn’t want to work hard and that was probably my issue,” Little said. “I’ve pushed through, I’ve put the work in I’d say and I’ve been rewarded.”

Her attitude is not the only thing that has changed over the journey. When the state side coaching staff first saw Little, she was a tall forward, slightly undersized for a key but strong overhead and clever around goals. Fast forward a few years, and the Eagles over-ager has been transformed into a contested midfielder.

“Yeah midfield’s been great,” Little said. “It’s hard to see the game in the midfield, I like sitting back in forward or sitting back in defence and you get to watch the game but I’m learning the game in a different way I guess and it’s helping me be more explosive, which is something you need to work on.”

Aside from explosiveness, Little said she wanted to get better at ground balls, whilst her work in close at the contest – such as her clean hands – and her aerial ability, were among her strengths. In playing her first game for South Australia on the weekend, Little said she enjoyed the experience, and adapted to the warm conditions after the first term. She also looked forward to playing on Adelaide Oval, with the atmosphere something “amazing”.

The Eagles youngster found out about the opportunity for the State Academy squad from Woodville-West Torrens’ Football Manager Matthew Goldsworthy. Despite being invited to come down to training, Little did not click she had been added to the state team until she arrived.

“I got a call from Matthew Goldsworthy and he said ‘I’ve just received an email, go to this training for the state team and then play on the Thursday’,” Little said. “It didn’t really sink in, I just thought I was coming to have a train and have a bit of a touch but I didn’t actually know that I’d been invited to the squad, not until I got there. “It didn’t really sink in until afterwards, but it’s been great, it’s an awesome opportunity, very lucky.”

Wanting to focus her on-field game to become more like Ebony Marinoff, Little said her biggest inspiration over her journey was that of her father.

“Definitely my dad. I love my dad to bits, he’s my biggest inspiration,” she said. “I think Cass Hartley, she’s a line coach at Eagles, and I’ve played a bit of footy with her at Morphettville Park and she’s a great leader and a great coach and I definitely look up to her a lot.”

Unlike a lot of her state teammates, Little finished Year 12 last year and now is working as a game development trainee at the SANFL. There, she can oversee the Auskick school clinics and the young talent coming through the Eagles zone, and achieve her Certificate III in Sport and Recreation. On the field, she is just hoping to play some great footy and get as far as she can.

“Obviously keep working hard and see where that takes me,” Little said. “Trust the process a bit and I’m hoping to get drafted or not really sure yet, but I just want to play footy at the highest level I can.”