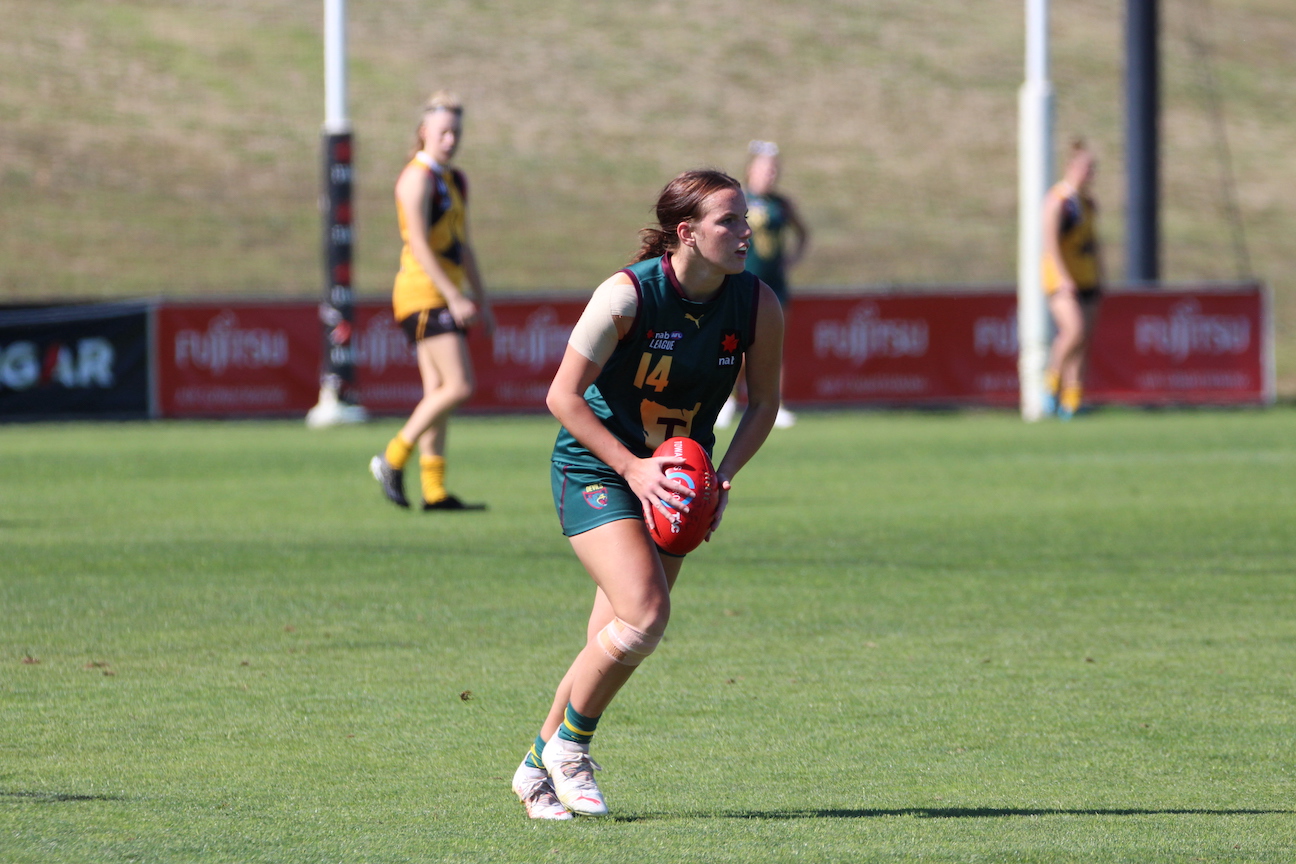 TASMANIAN Candice Belbin has taken the more traditional footballing pathway through to the AFL Women’s Under 18 Championships. Having played for the last six years, Belbin enjoyed the challenges rising up through Ulverstone, into the Tasmania Devils, and through to the Allies side at the 2022 national championships.

“I started at club in Grade 7, so when I was 12,” Belbin said. “Then I did Under 15s state in Grade 9, went on to play Devils last year, played the whole season last year and then Devils this year as well in the NAB League. “I missed a few games this year due to injury, but got back into it at the end and then we’ve had a few Winter Series games and now we’re here.”

Belbin ran out for the Devils on six occasions this year, making it 15 in total the past two seasons. The midfielder has averaged 11.9 disposals and laid 5.6 tackles per game across those 15 matches, including a whopping 7.8 per match in her top-age year this year. It was no surprise to hear of what she considers to be her personal strengths on the field.

“Aggression. It wasn’t the best (against NSW-ACT), but usually it’s my aggression, my second efforts, tackling, just staying on my player quite well,” she said.

Stating her improvements as decision making, long kicking and reading the play, which she has been developing over time. Though there is no Tasmanian State League (TSL) Women’s anymore, she was able to represent Ulverstone in the Tasmanian Statewide Women’s Grand Final last year, and back up her good form she had with the Devils.

“The level of standard for Devils is a lot higher than club, much more competition. “It’s good to work with girls from around the state that you don’t really know. “Good pathway for us that are old enough and the young ones coming through as well.”

Her form in 2022 lead her to be named in the Allies squad, and she was one of a number of Tasmanians who joined up with Northern Territory representatives to face off against NSW-ACT at Blacktown International Sportspark earlier this month.

“It (the game) was good,” Belbin said. Good for only just meeting the NT girls, we had a few meetings with them, then didn’t really do much with them, couldn’t really do a training or anything as they got in late. So it was good, worked well together, I think the game turned out pretty well.”

Belbin is now in her draft year, a goal she hopes to achieve one day, and follow in the footsteps of her idol, Daisy Pearce. Along with the Melbourne superstar, the Tasmanian teenager also credited her dad with her progression thanks to the “honest answers” he provides to her on her game.

Now the versatile talent is just looking to play some good footy and continue either roaming through the midfield, or running off half-back, which she sees as her two main positions.

“Inside mid would probably be a bit preferred, also a bit of back flank which is where I played roughly today (against NSW-ACT),” Belbin said. “Didn’t do as much run and carry as I normally would, but that’s normally what I like to do on the back flank, and inside mid, hard under it.”