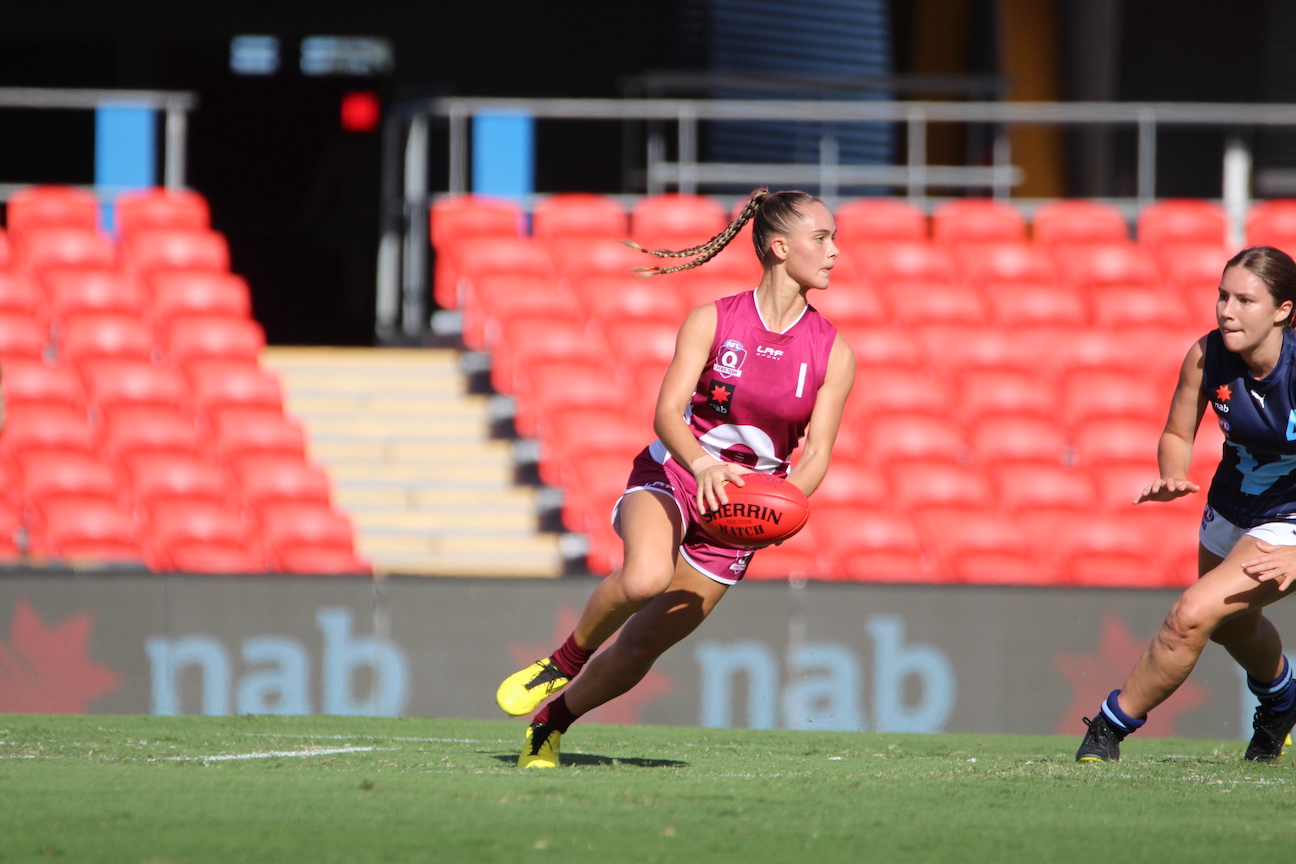 GIVEN Jasmyn Smith stands at around 159cm, the Gold Coast Suns Academy talent might not be the first person you expect to be among the top clearance players at the AFLW Under 18 Championships. But Smith’s carnival – which still has another game to go – has been nothing short of superb, racking up five clearances in both her games thus far and sitting third overall on the clearances leaderboard with a game in hand.

After recording her first five-clearance game against Vic Metro, Smith credited the ruck duo of Fleur Davies and Havana Harris for providing superb service to the Queensland midfielders.

“Yeah it was a good effort, shoutout to Fleur and Hav who were heading up the ruck and everything,” Smith said. “We were doing pretty well in those ones, we just have to turn it around in our forward 50.”

Since her bottom-age year ended, Smith has since enjoyed a strong six months. One of the top Gold Coast Suns performers against the Brisbane Lions Academy and then Oakleigh Chargers, she admitted it had been “pretty intense”.

“I guess our year kind of started back in October with the Suns preseason leading into the Suns games versus the Lions, and heading over to the NAB League round,” Smith said. “It was pretty intense leading into that, we really gelled as a team. “The Suns side we played for heading up to Melbourne that day and winning that game against the Chargers was amazing.

“Then this Queensland team has just gelled so instantly. “We had to turn up to a Maroochydore game after a week of training, just us first up. “That was pretty tough and I think throwing us in the deep end in that game to gel as a team really quickly really helped us, so it’s been pretty good.”

Smith said she found the step up in intensity against Vic Metro very noticeable with the game speed quite high early on, and it was difficult for the Queensland team to get it on their own terms.

“Full credit to Vic Metro for showing up, catching the flight (in the) morning and throwing that game together was awesome,” Smith said post-game. ‘I think both sides played a really good game.”

After the loss to Vic Metro, Smith joined the Queensland team on the trek down south to Melbourne where they toppled Vic Country in a thrilling game. With one more match to come, Smith will be looking to continue that form in the clash against the Allies, and then roll back into the QAFL Women’s where she has ran out with her new club Bond University this year.

“Bond’s awesome, that next step up from junior footy has been,” Smith said. “I thought it was going to be really hard taking that next step up, especially playing seniors first round, not just reserves. “But the girls got around us really well and took us hands through it, it was really good.”

As for her goals for the future, they remain the same.

“Well the draft will be coming up soon and hopefully I have a crack at that but if not I’ll have another year, my 18th/19th year, so if that doesn’t go my way it’s all good, we’ll just back it up with another year of this,” Smith said.