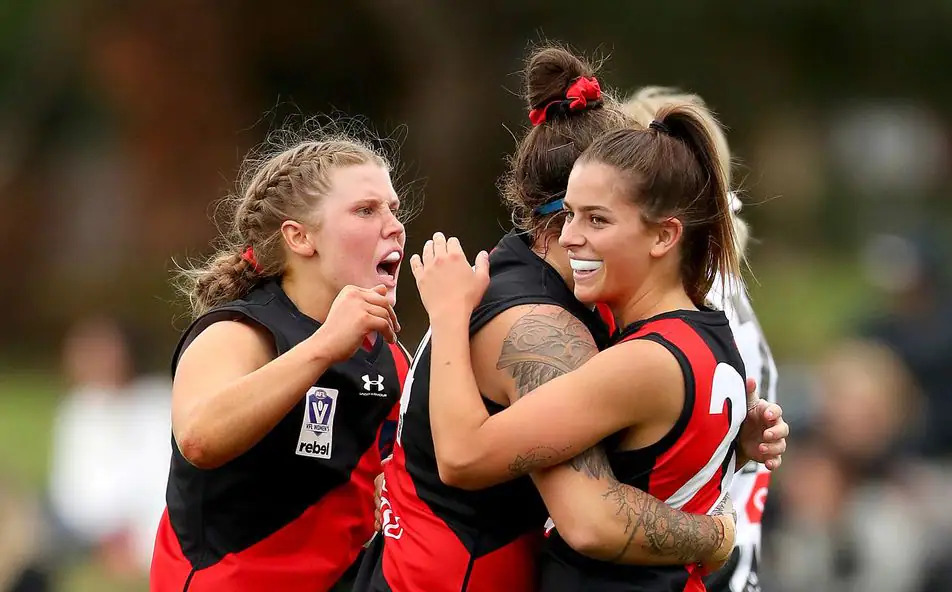 ROUND 13 of the VFLW saw the finalists almost set in stone, but not quite. Seven teams can still make finals, which makes next weekend’s final round potentially very interesting.

In this week’s match of the round, Essendon finally broke its hoodoo against the Southern Saints on Saturday, winning by 10 points at Trevor Barker Beach Oval in their first-ever victory over the red, white and black side.

Although they were not putting the score on the board early, the Saints were certainly winning the territory battle early, putting the Bombers’ defenders under a lot of pressure from the get go.

They finally got some reward on the board about halfway through the term when Chanelle Slater converted from dead in front to get the game’s first goal on the board.

The Saints had their second minutes later through milestone woman Olivia Flanagan, and things were looking good for the hosts.

Essendon finally got on the board with 90 seconds left in the term, but it was a behind as Federica Frew attempted an around the body snap, which cannoned straight into the post.

That Bomber behind would ultimately be the last score of the term as the Saints took a two-goal lead into the first change.

Early on in the second term, the tackling and defensive pressure from both sides was high but the scoring was not.

Essendon had more of the attacking moves, but it took the Bombers almost nine minutes to finally get a goal on the board, and they did so when Mia-Rae Clifford converted from almost 50 meters out.

It was only about two minutes later before Frew finally converted a major and all of a sudden it was the Bombers who led by a point.

Clifford booted her second of the term with just under 90 second to go to extend their lead even further, and at half time the Bombers had the lead to the tune of seven points.

One stark stat at halftime was that up until said point, no goals had been kicked up the City End of Trevor Barker Oval. All the first half goals were kicked up the Saunter end.

Scoring was as dry as the Sahara for much of the third term.

Both sides certainly had their opportunities, particularly the Bombers, but it took more then 15 minutes before Frew finally kicked the first goal of the match up the City end of the ground to extend their lead even further.

As the teams turned for home, the Bombers were on top with a 13-point lead and looking like they were finally going to break their Saintly hoodoo.

It did not take anywhere near as long for the scoring to get going in the final term, when Flanagan kicked an amazing snap for the boundary to break the Saints’ goalless run that had stretched longer then two quarters.

The ball spent the vast majority of the time in the Saints’ forward 50 for the first half of the quarter, and they finally got some more reward for effort when Slater converted her second to see the margin drop to two points.

Unfortunately, Saint hearts were about to break with just under three minutes to go as Grace Dicker converted from point blank range to extend the Bomber’s lead back out.

Dicker’s goal proved to be the final nail in the coffin as the Bombers got the win and extended their lead atop the VFLW ladder.

For the Bombers, their usual suspects Georgia Nanscawen and Jordan Zanchetta were absolutely everywhere, racking up the touches and creating a heap of forward momentum.

Even though she did find as much of the ball, Danielle Marshall was the Jill of all trades for the Bombers, after she was thrown in all different positions and made a difference wherever she went.

Simone Nalder also dominated in the ruck, winning more then double the hitouts of her Saints opponents.

Meanwhile for the Saints, Hannah Stuart and Alana Woodward were particularly impressive, and arguably best on ground for their side in a disappointing result.

Casey recorded another good win on the eve of finals, this time over Carlton.

The fact that the margin was already 25 points at quarter time was a sign of what was to come for both sides, as Carlton struggled to score, and Casey did not.

For Casey, Eliza West was a ball magnet in her return to the VFLW, finishing with 30 touches, while AFLW teammate Megan Fitzsimon finished with two majors.

Meanwhile for Carlton, Lily Goss finished with 20 touches and Jennifer Lew notched up 18.

Any last flicker of hope of making finals has officially been extinguished for the Darebin Falcons, after they went down to Hawthorn on Saturday afternoon.

The margin was only two points at the first change, but Hawthorn got its kicking boots on after that, and Darebin seemed to take them off. The Falcons only kicked one more goal for the afternoon as the Hawks piled on eight.

Meanwhile for the Falcons, in what is starting to become a regular pattern this season, it was Nicole Callinan who topped the disposal tally for her side, this time finishing with 17.

North Melbourne have kept their finals hopes alive with a 35-point win over the Western Bulldogs.

The Bulldogs lead by a goal at quarter time and were only down by a point at the main break, but fell away in the second half as North stormed away to a comfortable win.

Sarah Skinner may have only had eight touches in the win, but she was North’s leading goalkicker with two.

Someone who did get plenty of ball for the Roos was Reni Hicks, who racked up 23 touches.

Meanwhile for the Bulldogs, Eliza Vale finished on 22 touches while Lucy Schneider racked up 21 of her own.

Collingwood has one foot on the finals bus for 2022, after defeating Port Melbourne by nine points.

Port actually had the stronger first half, and lead by two goals and the main break, before Collingwood stepped up in the second half to take the win.

What was not unusual was the top disposal winner for the Pies, with Matilda Zander leading the tally with 24.

Meanwhile for the Borough, Kate Adams was the leading disposal getter with 20.

Geelong warmed up for finals with another good win, this time defeating Williamstown by 35 points.

The Seagulls actually matched it with the Cats for the first half, but fell away in the second half to see the Cats take the win.

Meanwhile for the Seagulls, Ella Baxter finished with 17 touches.