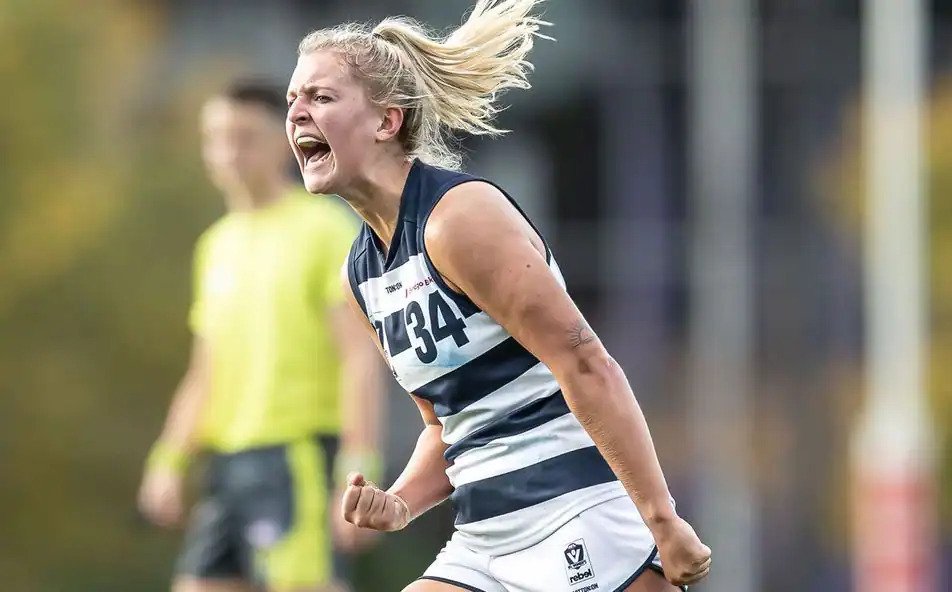 THE final weekend of the 2022 VFLW home-and-away season was an entertaining one, as the top six was confirmed ahead of the finals.

In this week’s match of the round, Geelong denied Collingwood security in the postseason, beating them by 19 points and leaving the Pies to sweat on later results to see whether they would make finals or not.

Needing a positive start, the first quarter was a complete disaster for the Pies.

The Cats took eight minutes to score their first goal though, and it came from a pretty unlikely source as Rene Caris converted after being the beneficiary of a 50-metre penalty.

The Cats did not have to wait too much longer for their second major, as Sachi DeGiacomi snuck out the back of the pack to extend Geelong’s lead about two minutes later.

Geelong’s first quarter dominance only resulted in the two goals though, and so at quarter time the margin was 13 points in favour of the Cats.

Things did not get any easier for Collingwood’s defenders in the second quarter, as the Cats continued to pepper the goals, but did not get much reward as their kicks often went wide.

It took the Cats five minutes to finally translate pressure to scores, when Paige Scott kicked a remarkable goal from the boundary to extend their lead even further.

Collingwood certainly had chances late in the quarter to finally put a response on the board, but the Geelong defence was too strong and kept the Pies to another scoreless quarter.

Unfortunately for Geelong though, Scott’s goal was the only one for the term as the Cats took a 23-point lead into the main break.

The third quarter was all Collingwood.

Whatever Chloe McMillan said to her team at half time worked, as goals to Matilda Zander, Marla Neal and Nyakoat Dojiok saw the margin reduced to under a kick at the final change.

Geelong certainly had chances to stretch the margin out in the middle of the term, but only had a single behind to show for their efforts. Unfortunately for Collingwood, its resistance ultimately proved futile.

Dojiok kicked her second within the opening minutes of the final term which did give the Pies the lead, but it was all Geelong from there as goals to Breanna Pratt, Mia Skinner and Emily Ramsay saw the visitors take the win.

The result left Collingwood and its fans sweating on the result of the Southern Saints-North Melbourne match the following day, but ultimately the footy gods were smiling on the Pies.

After the Geelong win, North needed to climb Mt Everest in order to make finals, but ultimately they could not even climb the hill to Jolimont Station. The Roos needed to defeat the Saints by a huge margin, but lost by 26 points.

They certainly had plenty of opportunities to kick the big score, but just could not convert.

For the Saints, Amelia Peck kicked two majors, while Grace Buchan was a star across half back and finished with 21 touches.

Meanwhile for the Roos, Sarah Skinner kicked two majors of her own while Annabel Scott was a work horse through the middle and finished with 26 touches.

Essendon are the undefeated minor premiers for 2022, after defeating Casey by a single goal.

The Dees pushed the Bombers all day, but just ran out of time to overrun them.

For the Bombers, it was Renee Tierney who top scored with two goals, while for Casey Megan Fitzsimon also kicked two majors.

Meanwhile on the disposal front, Alana Barba finished with 17 for Essendon, while Eliza West was everywhere for Casey, finishing up with 32 of them.

Hawthorn booked a spot in the Qualifying Final with a hard fought win over Williamstown.

The Seagulls actually had the lead at half time, but just could not score in the second half as the Hawks came from behind to take the win.

Kristy Stratton was the only multiple goal kicker on the ground with two, while Ruby Tripodi and Jordan Mifsud both finished with over 20 touches for their respective sides.

The Bulldogs’ disastrous season has finally come to an end, but not before one final thrashing, this time at the hands of Carlton.

The Blues were dominant all afternoon, as they went on to win by 83 points and kept the Dogs goalless.

Plenty of Blues got on the scoreboard on Saturday afternoon.

Meanwhile for the Bulldogs, Lucy Schneider found plenty of the ball, finishing with 26 touches.

Port Melbourne ended its disappointing season on a high, beating the Darebin Falcons in a nail biter.

Despite trailing all game, the Falcons staged an almighty final term comeback to no avail, losing by two points.

Claire Dyett finished with 28 disposals for the Borough, while not for the first time this season it was Nicole Callinan who was the highest disposal getter for the Falcons, this time finishing with 24.