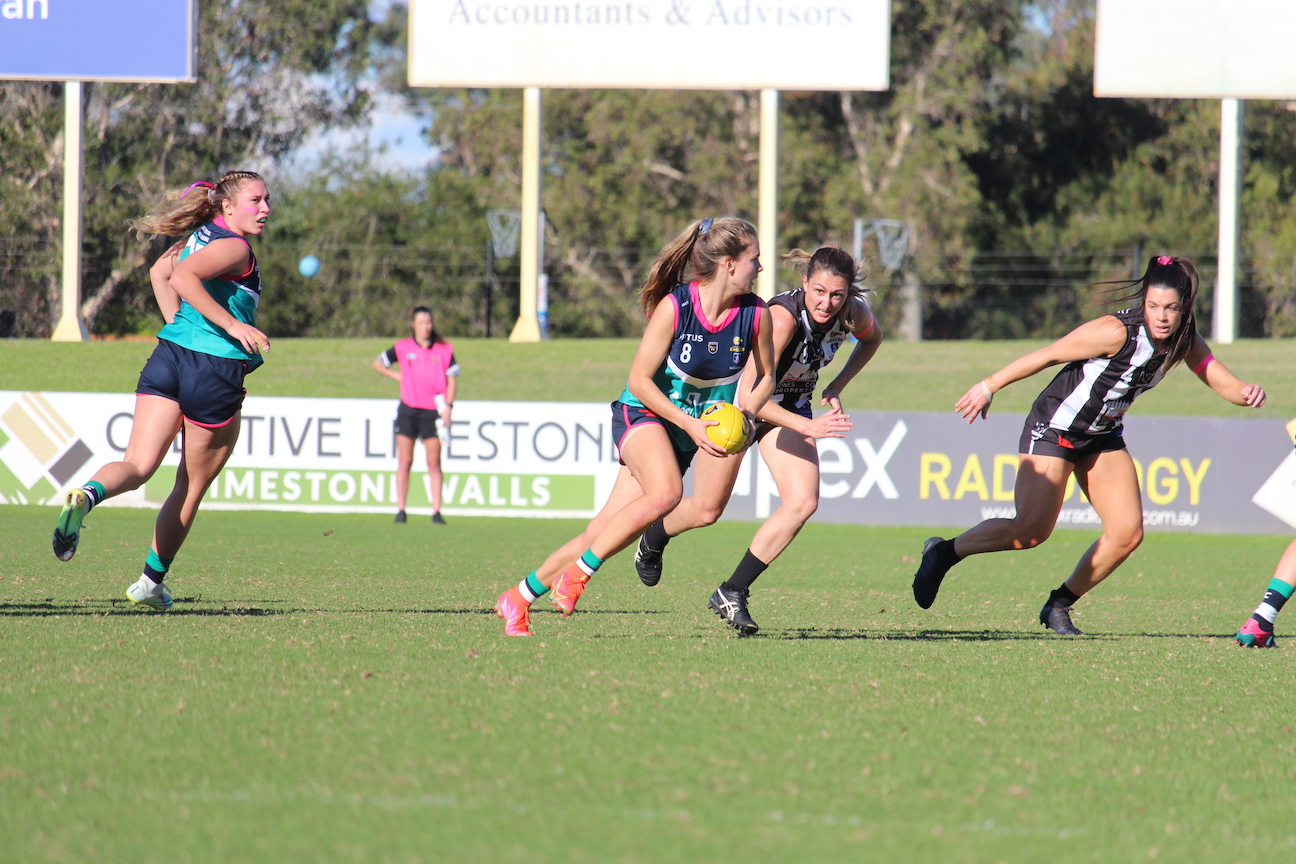 NOW the AFLW Draft Combine invitees have been named, the focus of the weekly West Australian Football League (WAFL) Women’s Academy notes will look to those draft-eligible players and how they perform each round. These notes will be separate to the game-by-game notes, which will now focus on bottom-age talents and others who catch the eye.

It was another strong performance from Britton who worked up and down the wing really well. Her efficiency by hand was a little off early with a no-look handball and a handball to space in the first term, but her kicking seemed to be on-point as usual, including adjusting her kick mid-action from the wing to hit up Aisha Wright at half-forward. What she offers to her side was displayed in the third term where she received the ball at half-back, took a bounce and kicked long down the wing, ran hard to receive it back and pinpoint a pass to a teammate at half-forward. She had a shot on goal in the final term which missed to the right, but had a couple of slick disposals later on and finished being one of the better Thunder players on the ground.

The Swan Districts midfielder was again busy across the ground, accumulating plenty of the ball. She was often forced into rushed situations (credit to the Peel Thunder defensive press), but overall she was busy from start to finish. Still needing to adjust that final product of her kicking, she did have a couple of really eye-catching plays, including a nice burst and hit-up of a teammate at the top of 50 in the last quarter, then burst away out of defence, fended off an opponent, sidestepped another and kicked long, just unfortunately turned it over. Earlier in the third term, she won the ball in close, burst away but just missed to the left.

Mann played in defence and had the majority of her 12 touches coming in the last quarter, pushing high and intercepting the ball on a number of occasions, though she was quieter in the first half – also due to the Thunder having general game control – Mann was able to have that influence in the final term and kick long to points around the ground. Her kicking was a touch hit and miss, but her technical ability was sound, and she was looking to open the game up with piercing passes into the middle of the field.

Without Kate Bartlett out there, Roberts was always going to have plenty of company inside 50, and she was double-teamed early in the piece to try and stem her from scoring. It may have worked, but her defensive pressure was still up with a couple of big tackles, then went into the midfield and just kept winning it. She set up a couple of goals to first-gamer Jordain Thompson, the first with a quick handball near the goalsquare in the second term, and the second with a lovely centring kick in the final quarter. She was a part of a number of other scoring chains, and somehow managed to pull down a contested grab off a torpedo punt late in the game, but then missed the easy set shot she would be disappointed with herself. Overall though, she did what she could and looked calm and composed with ball-in-hand.

The Claremont half-back spent time between the defence and the wing, and was the subject of our WAFLW Player Focus this week. For a full rundown on her performance, check that out.

The younger sister of Jaide made her debut and had some lively moments. She took a couple of good marks, and though she was bumped off the ball a few times against stronger opponents, showed her nice sidestep on the wing during the second term to give off a clean handball. She competed hard and even kicked a goal on debut. Marking at half-back, she got a double 50m penalty thanks to her opponents encroaching and kicked it from just outside the goalsquare. Unfortunately sister Jaide was on the bench at the time and actually replaced Holly on the field, so had to wait for her to get to the bench to celebrate the moment.

Playing on a wing, Fish was lively and able to create scoring opportunities by driving the ball inside 50. She tended to win it either at half-back or on the wing early, and was skilful by hand or foot. She burst down the middle of the ground in the third term taking ab ounce, then was able to turn on a dime in a stoppage to extract the ball to the outside well. One of the more prominent young guns over the weekend.

The West Perth winger was solid without being outstanding, winning her fair share of touches and using her athleticism to evade various players. She was clean in defence, and able to hit up targets well, aside from a dribble kick down the wing. Norbury can tend to get pushed off the ball a little, but her nice burst – where she had one-twos – saw her catch the eye.

Not her biggest performance, but still had some eye-catching moments, with the Under 16s talent taking the game on and looking to apply scoreboard pressure. She had a massive burst down the middle at one stage, weaving through opponents and having a flying shot, but it missed to the right. She covered the ground well and did have a couple of chances both at marking and snapping on goal, but was tightly guarded by her opponents.

Came in for her debut and kicked a couple of goals. She kept presenting throughout the contest, and being a taller player was one to get into front position. She did well with bodywork to knock her opponent over in the first term then dropped the mark, but recovered well to pick it up again. She kicked her two goals courtesy of Roberts, snapping a goal from a spin in the second term, then converting the set shot goal from straight in front after a mark one minute into the last quarter.