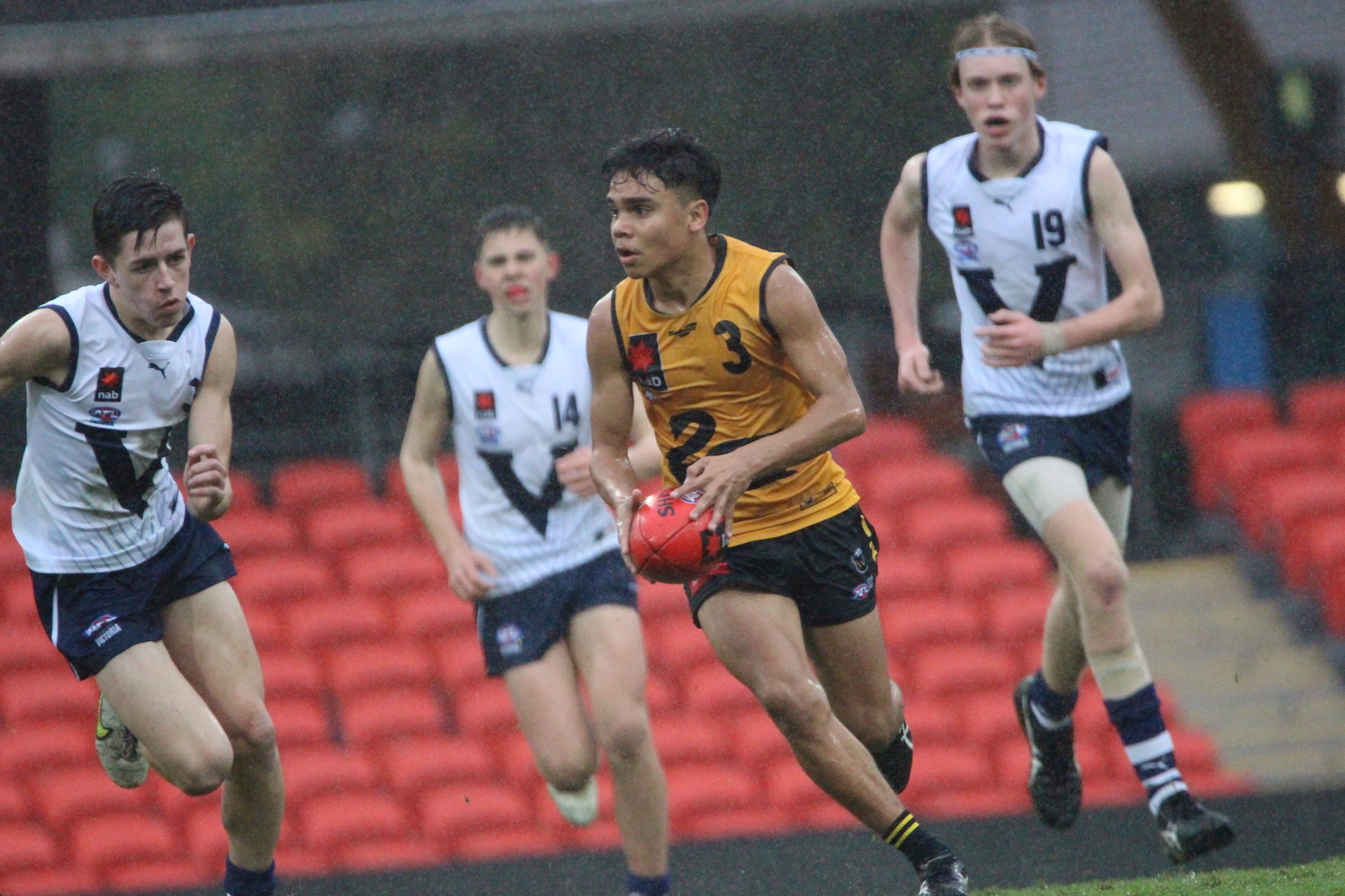 AN outstanding performance from Malakai Champion has helped Western Australia to its first win of the 2022 AFL Under 16 Championships, defeating Vic Country by 16 points at Metricon Stadium today. Champion, along with a host of willing teammates were not afraid to get their hands dirty in the wet and windy conditions on the Gold Coast, to bounce back from their Round 1 defeat to South Australia. Though it was never completely one-sided, six unanswered goals either side of half-time solidified the 9.9 (63) to 7.5 (47) victory.

Trailing by as much as two goals during the second term, Western Australia’s run of six consecutive majors from the 15-minute mark of the second term through, until the 21st minute of the third term saw them race out to a 31-point lead. Champion’s first major of the game – though he had set up a couple, ultimately sealed the result. Though Vic Country hit back with four of the last five goals in the final 25 minutes, it would not be enough, with the Sandgropers saluting.

Vic Country looked the goods from early on, with Asher Eastham and Sam Lalor slotting the first two majors. Western Australia had chances, including the opportunity to level the scores at quarter time when Koopa Walsh had a set shot from 50m. He ran in an arc and sailed it home, but the siren sounded mid run up and his goal – that was celebrated by all his teammates – was soon discounted, and the Sandgropers trailed by six points at the first break.

The second term saw Jonty Faull extend Country’s lead out to two goals, off the back of some fantastic work of the likes of Xavier Ivisic, Jasper Alger and Lalor, who were all tearing it up for the leaders. That was soon to change though, when Anthony Hansen and his outstandingly clean hands produced a memorable finish. A critical Country turnover trying to switch close to goal gifted Cooper Moore a major and Western Australia hit the front to lead by two points.

The first four goals of the premiership quarter also went the way of the Sandgropers as they blew the lead out to beyond five goals. It took until James Barrat‘s six-pointer in the final moments of the third quarter to snap the drought and cut the final break deficit to 25 points. Vic Country needed the first of the final term, but instead it went the way of Xavier Walsh and the West Australians in the eighth minute to effectively seal the deal.

Vic Country did not give in though as Finn O’Sullivan had an immediate response, and then as the game entered the final 10 minutes, Harrison Canning also added his name to the goalkickers list, but it would not be enough. A last consolation goal to Lachie Jaques brought the losing margin back to 16 points, but ultimately was too little, too late as WA came away with the important win ahead of their final championships clash with Vic Metro. Meanwhile, Country will take on South Australia in their final match.

Champion and Hansen were electric rotating between midfield and forward, as defender Deian Roberts was also prolific out of defence. Up forward, Xavier Walsh and Hansen slotted two goals. Country also had a number of outstanding contributors, with Lalor, Alger and Ivisic among the top players all day. They had seven individual goalkickers in the win.