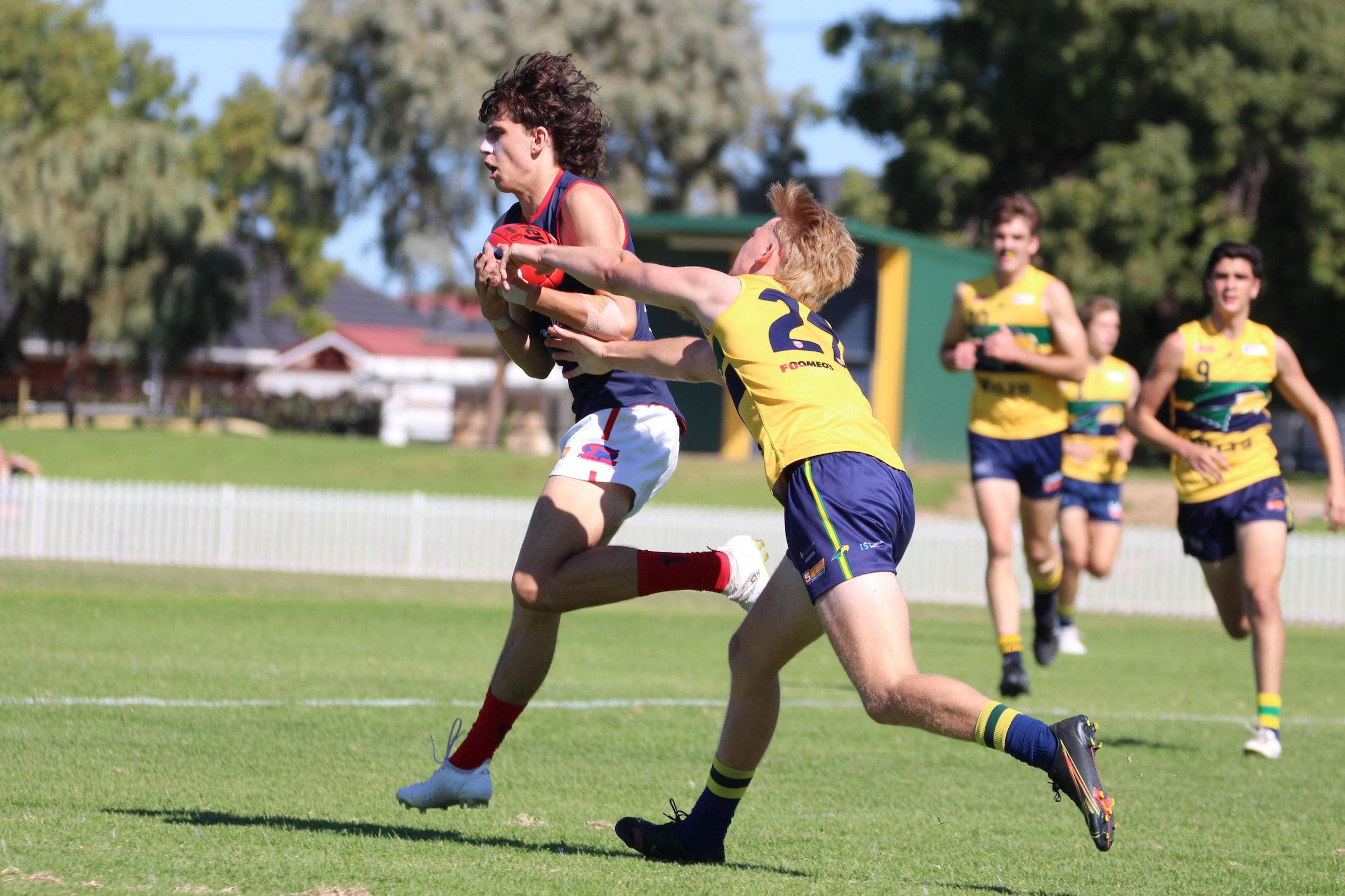 WHILE the state Under 18s squad travelled to Victoria to take on Metro on Sunday, the junior SANFL competition rolled on into Round 14. With top draft-age talent unavailable, there were a couple of upsets as the top two sides were knocked off in the same afternoon. We recap the results from around the grounds, before taking a look up the grades.

Woodville-West Torrens opened the round with a win against second-placed Glenelg, despite going scoreless in the first term. Glenelg was unable to make the most of its opportunities in the opening quarter, managing just seven straight behinds. Midfielder Will Trevena (20 disposals and two goals) finally broke through early in the second term, but the Eagles kicked six of the next seven goals to open up a 21-point lead at half time.

The Tigers were again wasteful in the third, but managed to claw their way back, taking a narrow one point lead into the final break. However, Woodville West-Torrens proved too strong, kicking the last four goals of the game to win by 24 points.

Jacob Battle had a big day, finishing with 32 possessions, while Bailey Arthur (25 disposals), Elex Day (25 disposals and a goal) and Jordan Tilbrook (22 disposals, nine tackles and a goal) were also strong performers for the home side.

The visitors were again led by midfielder Ben Ridgway who had a game-high 34 touches to go with eight marks and a goal. Charlie Hildyard (21 disposals), Noah Sims (20 disposals and a goal) and Bowen Payne (20 disposals, six rebound 50s) also found plenty of the football.

West Adelaide handed North its second loss in a row with a four-goal win at home. The Bloods got off to a blistering start, kicking eight goals in the first term and never looking back. Tyson Coe was everywhere, finishing with 37 disposals, six clearances and three goals in a best-on-ground display.

North Adelaide captain James White was again one of his side’s best, finishing with 30 possessions and two goals. Running mate Hughen Wissman (28 disposals and five clearances) found plenty of the ball, while Kane McAuliffe (26 disposals, seven inside 50s and three behinds) and Henry Wicks (26 disposals, six marks, 11 tackles, nine inside 50s and a goal) drove North into attack all day. Oliver Dignan finished with a team-high three goals for the visitors.

Norwood was clinical in its 62-point demolition of South Adelaide. The Redlegs won all four quarters to close the gap on second-placed Glenelg. Noah Hyde (28 disposals, five clearances, seven inside 50s, six rebound 50s and two goals) continued his strong form in the red and blue this year, though he was far from alone in a well-balanced team performance.

It was a tough day for South Adelaide. Will Verrall (11 disposals, 10 hitouts and two goals) and Jye Bottroff (16 disposals, 10 hitouts and six tackles) battled hard all day in the ruck, but were soundly beaten. Jayden Christophers (20 disposals, six clearances and nine tackles) and Blake Rodrigues (15 disposals, six tackles and a goal) were some of the visitors’ better performers through the middle of the ground, while Koby Cockshell (15 disposals and a goal) and Jack Delean (11 disposals, five tackles and two goals) were also serviceable.

Sturt made it four wins from four games for the home teams in Round 14, defeating Central District by 37 points. The Dogs were within nine points at the main break, but 18 scoring shots to five in the second half saw the Double Blues extend their winning streak to three in a row.

Hayden Brokensha was victorious in his Reserves debut. The Glenelg product won 12 disposals in a 15-point win against Woodville-West Torrens.

After appearing in every Under 18 game so far this year, Will Torode debuted for Sturt in the Reserves, winning 13 possessions and taking eight marks in a 10-point win.