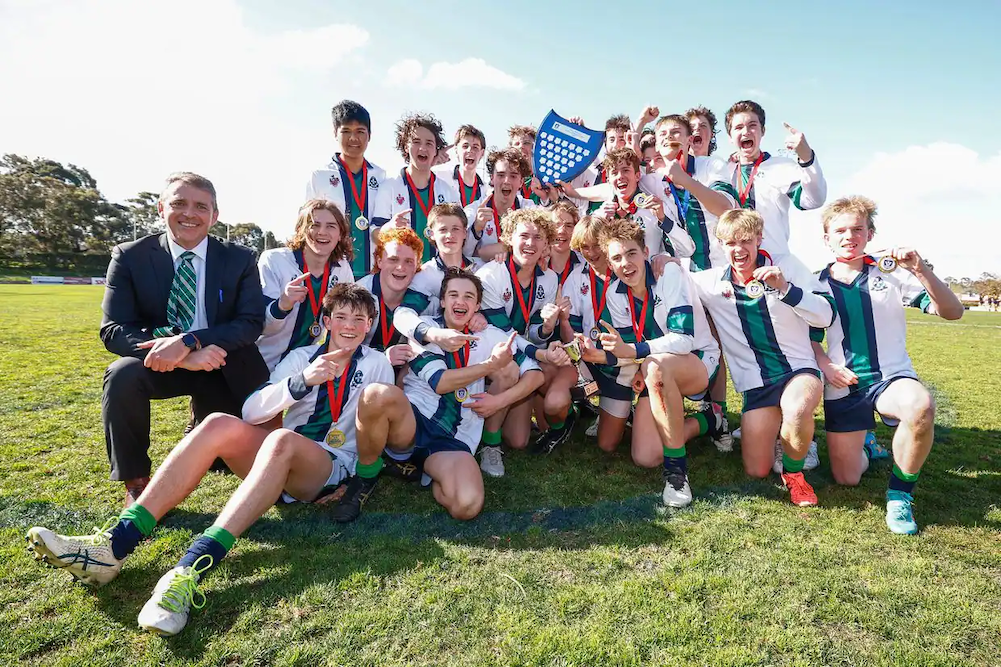 SCHOOL football juggernaut St Patrick’s College have claimed another Herald Sun Shield, this time in the Division 1 Intermediate Boys, defeating Parade College by four points in a thrilling comeback. St Patrick’s looked in serious trouble early against the boys from the northern suburbs, but a combination of inaccuracy and ill-discipline hurt Parade, with the losers kicking five goals from 22 scoring shots, including three from 17 in the first three quarters. In the end, a three-goal final term in challenging conditions saw St Patrick’s claim the win, 7.9 (51) to 5.17 (47).

Taking place at Box Hill City Oval, there was a strong breeze towards the Maroondah Highway end with Parade College having the advantage in the opening term. They certainly had more than their fair share of scoring chances, but could not find the big sticks consistently, kicking seven straight behinds over the first 15 minutes of the match, before Anthony Guarino intercepted off the kickout and slam home the game’s first major from 45m. A minute and a half later, Tyson Gresham spotted a free option in Mitchell Moate, whose set shot also sailed home and handed Parade a 19-point buffer at the first change.

Victorian Under 16s representatives Archie Caldow and Jack Ough were starting to get going for St Patrick’s in the second term, while Metro’s Zak Johnson was similarly looking dangerous for Parade. The first St Patrick’s score came a minute into the second term which was a poster from Nedd Bennett, but the first goal went the way of Oliver Morris, with the east Point forward slotting a quick goal in congestion after almost half an hour of action. Moate had a couple of chances down the other end but could not make the most of it, with Ollie Hannaford instead receiving a push in the back free kick and then a subsequent 50m for abuse from the Parade defenders to convert the set shot from the goalsquare.

Ned Renfree was providing some highlights in the first half with a huge fly and some timely spoils and tackles, but it was Parade who goaled after Jordyn Gillard gave it off to Jack Capuana in the final minute to kick out against the flow and hand Parade a 13-point half-time lead. Had they had an extra second more, and Parade would have retained the 19-point quarter time buffer, with a quick clearance in the final few seconds and snap from Christian Ganino sailing through, but the kick was after the siren and disallowed.

The second half is where St Patrick’s really made its move. Caldow and Renfree continued their good form, with Noah Scott and Jack Stone trying hard for the Parade boys,. The marking and short, pinpoint passing was going far better early in the third than in the first half, with teams thinking their way through plays from end to end. It would be Ough who hit up a perfect pass to forward Strahan Robinson setting up the first goal, as Robinson made no mistake. It would be the first of two goals for the strong marker, converting a goal in the final minute of the term after missing a few chances.

Speaking of missing chances, Parade continued to pepper the goals despite having the strong breeze but could not put one through the big sticks with five straight behinds. It took until Ganino hit a well-weighted pass in the final few seconds to Moate, for Parade to get on the board in the third term. Kicking after the siren, the Parade forward made no mistake, converting his second goal and giving his side an eight-point buffer at the final break.

St Patrick’s needed to put in one big effort for the final term, but had the air of the breeze. Hannaford was able to get involved early with a great one-two passage from the wing inside 50, but his kick went wide, before giving it off to Bennett a minute later who made no mistake. The margin was back to one point and it kept ebbing and flowing between a point and a draw over the next 10 minutes. Then in the 15th minute, Ough marked 60m out and without realising it multiple Parade defenders ran straight through the protected area which left the umpire no choice and paid the 50m penalty.

Kicking from the top of the goalsquare Ough converted to give St Patrick’s its first lead of the game, and then not more than a minute later, Ough won a clearance and produced a brilliant kick to Eli Holloway inside 50. With plenty of pressure on his kick, the forward went back and slotted the goal from 40m and seemingly sealed the game with an 11-point lead. But there was another twist to come, with a minute to play, Parade got the ball to the dynamic Johnson who snapped around his body to make it four points. Rushing it back to the middle of the ground – as St Patrick’s took as much time as they legally could getting back – the clock eventually ran out as the Ballarat-based school forced a throw-in by getting it to the line when the siren sounded.

Renfree was awarded the Player of the Match, though it could have easily have gone to a number of players including Caldow and Ough. Caldow’s marking throughout the game was strong, while Ough’s pinpoint precision in challenging conditions and deft touches were crucial. Hannaford and Morris also impressed for the winners, while Robinson’s two goals were vital, and Bennett’s defensive pressure was equally impressive. For Parade, Moate was constantly involved in the forward half, with Gillard having plenty of it. Stone, Gresham and Ganino also had their moments, while Johnson always looked threatening.