AFLW Season 7: Round 6 Talking Points – Favourites win, but some easier than others 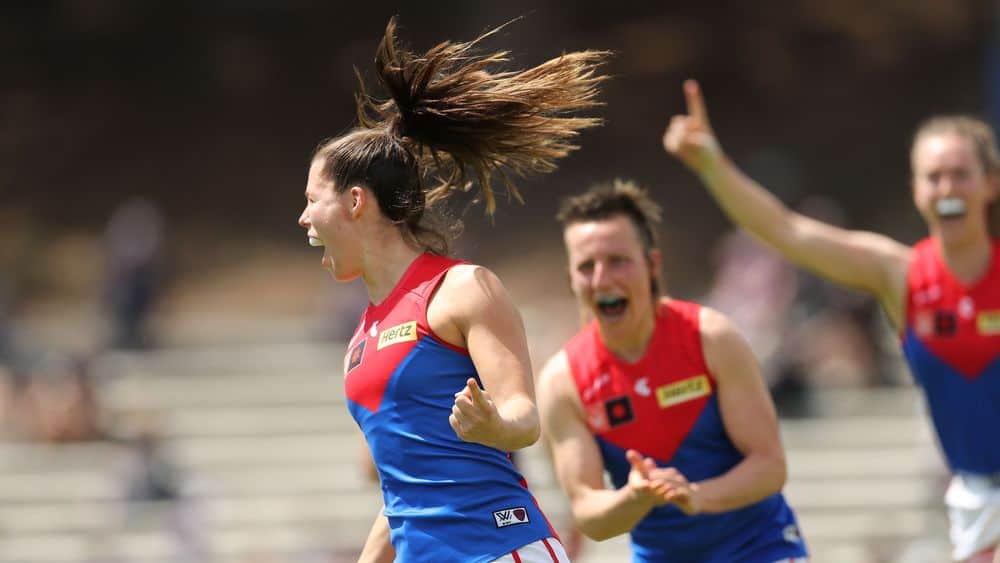 SUNDAY’S action in the AFLW saw largely expected results with all the favourites winning, but they did not all do it as easily as their final winning margins may suggest. Melbourne was pushed by Fremantle but still got a comfortable win, while Brisbane and North Melbourne easily took care of Essendon and Sydney respectively.

Brisbane flexed its muscles against newcomers Essendon, and overcame inaccuracy to ground the Bombers to the tune of 44 points at Moreton Bay Sporting Complex. Brisbane had 15 scoring shots to zero in the first half, and kept the Bombers to just two inside 50s, but could only manufacture three goals. They booted five majors in the second half to ensure the result was beyond doubt, though to the Bombers’ credit their straight shooting of 3.0 enabled them to make the most of their limited opportunities.

It was all one way traffic in the first half, as Brisbane dominated the game in the wet, applying incredible forward half pressure to have 15 scoring shots to nil in the opening half. Unfortunately for Lions fans, the team left the door ajar at the main break with a 30-point margin not reflective of the complete and utter domination of the home side. Though Essendon was able to hit the scoreboard in the second half through some accurate shooting, the Lions still booted 5.2 to 3.0 to ensure they came away with a comfortable 8.14 (62) to 3.0 (18) victory.

Essendon coach Natalie Wood was in awe of what Brisbane was able to produce, and conceded that it was easy to see why the Lions were so hard to play against. They brought the defensive intent from the first bounce, with some memorable tackles including a big one from Emily Bates on Madison Prespakis early, and a big front-on tackle from Zimmorlei Farquharson to stop speedster Amber Clarke.

It was a day to remember despite the lob-sided scoreline for Joanne Doonan who converted her first AFL Women’s goal in history. The former Irish Gaelic footballer and Carlton AFLW player donned the sash for Season 7, and in Round 6 final put her name on the goalkickers list. With her side down 42-0, a rare forward 50 entry saw the ball land in front of her, and while Doonan was unable to take it cleanly, her opponent dragged her off it assuming she had. It allowed Doonan to go back and drill the regulation set shot for the Bombers’ first major with 3:22 on the clock in the third term.

Bates and Anderson blow away Bombers

It was not just one-sided on the scoreboard, but also in the middle, as the damaging duo of Bates and Ally Anderson combined for more clearances than the entire Essendon on-ball group. Bates racked up 10 clearances to go with 19 disposals, while Anderson managed seven from 23 respectively. Remarkably, Essendon only had the 15 in total with Prespakis – who was tightly guarded by Cathy Svarc – recording the most with three. Additionally for Anderson, she became the first Indigenous player to notch up 1000 disposals in a terrific achievement that was acknowledged by coach Craig Starcevich post-game.

How high can the Bombers finish?

Essendon has proven it is a competitive lineup in Season 7, but the expansion side still has a way to go against the genuine contenders. The Bombers will have another huge test down in Warrnambool next week as they take on Geelong, with a date with Melbourne in Round 9 another big game at Casey Fields. Essendon should have no issues against the Swans in Round 8, but could be battling Port Adelaide for the highest ranked expansion side in Round 10. Brisbane on the other hand play three other top four hopefuls in North Melbourne, Adelaide and Collingwood on the run home to finals.

Melbourne have recorded its fifth win of the season, downing the Fremantle Dockers by 30 points.

Fremantle matched it with the visitors for three quarters, before Melbourne really put the foot down in the final quarter to take the win.

As has happened on a number of occasions this season, Melbourne’s mids were among the best for the Dees.

Tyla Hanks (22 touches, six tackles), Lily Mithen (21 touches), Olivia Purcell (26 touches) and Karen Paxman (18 touches) all had excellent games, with Hanks in particular playing like a woman on a mission from the get go.

Playing in both the ruck and forward line, Harris also found herself in the defensive 50 at times, proving to be quite the able intercept defender.

Kate’s kicking has Dees on a high

Another Dee that was certainly causing headaches for the Dockers was Kate Hore.

She was a sneaky pocket rocket in the forward line for the Dees, booting three majors and proving tricky for the Dockers to contain.

Freo certainly did their homework on the Dees

To Fremantle’s credit, it certainly had done its homework on the Dees, and really pushed the visitors for three quarters.

They cut off the corridor to the Dees, and they cut off the 45 degree kick, leaving the Dees with not much room to move and prone to making mistakes.

Bowers causing all sorts of headaches

Speaking of players causing headaches, one player that was certainly causing Melbourne headaches was Kiara Bowers.

She was quite the thorn in the side for the Dees, racking up the 26 touches, a whopping 12 tackles (well, not whopping by her standards) and just proving very hard to contain for the Dees.

North Melbourne set records as a club, recording its highest AFLW win, after a comprehensive win against the Sydney Swans to finish round six of the AFLW competition.

The Kangaroos were hungry from the first quarter onwards and had the game on their terms, dominating the contest, clearance battle and finding numerous contributions to set up the victory.

North’s tough defensive pressure too much for Swans

From the start of the match, the midfield unit of Amy Smith, Jasmine Garner and Tess Craven did a great job of disturbing the Swans midfielders with their sharp quick ball movement and finding way too easy access inside North Melbourne’s forward 50.

Whilst the Swans couldn’t penetrate in their forward half, the Kangaroos defenders in Erika O’Shea, Sarah Wright, Emma Kearney, Jasmine Ferguson and Nicole Bresnehan were able to get the Swans under pressure and allow the Swans to turn plenty of the footy over under the pressure.

With the Swans having a strong game plan on Kearney, Brooke Brown stepped up in the defensive line, and was destructive to the Swans forwards and causing disruption in the backline.

Savarirayan work rate: player to watch in the future

Known for her quickness and cleanliness of possession of the footy, Crocker praised her tackle later in the game using her speed down the field, when the Swans were struggling to contain her and having good vision down the field.