AFLW Season 7: Round 7 Talking Points – Not really the day to be the visiting side 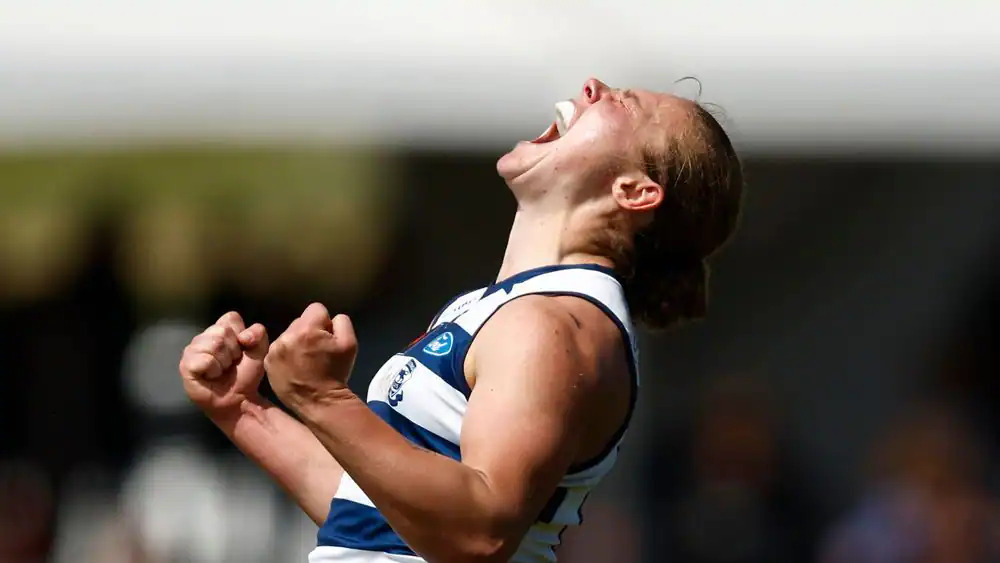 SUNDAY in the AFLW was not the best day to be the away side, with two of the three visitors recording tough losses.

Geelong did buck the trend by beating Essendon, but the Western Bulldogs and GWS comfortably lost to Melbourne and Collingwood respectively.

Geelong continued its sensational Season 7 with a 15-point win over Essendon, handing the Bombers their fourth straight loss in the process. While it was another competitive match for the Bombers down at Reid Oval in Warrnambool, the Cats proved a bit too structured and took the game out, 6.7 (43) to 4.4 (28)

It took until the last quarter, but Geelong was finally able to dispatch Essendon after booting the only two goals of the final term, keeping the Bombers to just one behind. Prior to that, they had been level at the final break following Essendon kicking the only two goals of the premiership quarter. Luckily for coach Dan Lowther, Chloe Scheer came to the rescue, kicking two goals in the space of four minutes to start the final stanza and ensure the Cats headed home happy. Not only did she kick the two clutch goals, but Scheer kicked three for the day, and had it not been for four behinds, could have finished with a massive total.

Essendon had the stat numbers to suggest the Bombers should have finished in front, with 22 more disposals, seven more inside 50s and a massive 14 more clearances. Headlined by a 32-18 clearance differential – including 25-13 around the ground at stoppages – the Bombers were taking control in close, but then turning the ball over consistently. Essendon produced 15 more turnovers (49-34) and then when they went inside 50, were only able to generate eight scores from 29 entries, taking just the eight marks in there. By contrast, Geelong had 13 scores from 22 inside 50s, running at 59 per cent efficiency off the back of 11 marks in there.

Though the game was billed as the second clash between the Prespakis sisters, a two-game suspension to Georgie Prespakis two weeks ago meant the long-sleeved Cat was in the stands for the match against her Bomber sister. In her absence, Madison made up for the both of them, racking up 37 disposals and 10 clearances. The 37 touches were the second most in AFLW history, with the number four turning it on down at the ‘Bool.

Is Amy McDonald a W-Medal chance?

Her consistent form suggests she might be. Geelong is finally winning enough games to poll plenty of votes, and she leads from the front through the midfield. Aside from Prespakis’ insane game, McDonald racked up 26 disposals, seven clearances and laid 12 tackles to be best afield with Scheer for her side, and in a win too. Though Prespakis will surely get the three votes, McDonald should add another two to her tally for the year, which would be well into double-figure votes by now, one would suggest. McDonald really stepped up in Georgie’s absence.

The Hampson-Hardeman Cup is staying in Cranbourne, after Melbourne annihilated the Western Bulldogs to the tune of 64 points. The Bulldogs kept the Dees well contained up until quarter time despite the pressure they were under, but it was all one way traffic after quarter time as the Dees made a statement.

Despite the two sides having played so often over the years, yesterday’s encounter was remarkably the first time they have ever clashed at Casey Fields.

However after yesterday’s clash, the Dogs will certainly not be hoping for a repeat trip.

They did not look at their best, lost in the ground dimensions at times and unable to contend with the conditions.

It could have been so much worse for the Bulldogs

A 64 point loss is bad enough, but things could have been much, much worse for the Bulldogs if Melbourne had converted at least a couple more of its first quarter inside 50s.

In the first quarter alone, Melbourne had 12 inside 50s but could only manage to put one goal one on the board. It ultimately did not matter for the Dees because they pulled away like they did, but the Bulldogs will be counting their lucky stars that Melbourne’s inside 50 efficiency was so bad in that first term.

After a few quiet weeks, Alyssa Bannan came out and played an absolute blinder.

Despite remarkably only having the eight touches, she played like she recorded at least double that, really using her pace to her advantage and not only setting up plenty of attacking play for her team, but kicking three majors of her own.

One of her biggest highlights of the day was the run down tackle she laid to set up Tayla Harris’ second goal.

Goldie is a gun

Another Dee who had a blinder at Casey was Sinead Goldrick.

Crashing packs like Dees fans do not normally see from the Irish star and laying a run down on Ellie Blackburn, she was a woman on a mission and her fearlessness at the contest was spectacular.

Melbourne did not come away from the clash unscathed, with Karen Paxman and Lauren Pearce getting caught up in an accidental head clash between the pair.

Thankfully for the Dees, Paxman was able to return to the action, but unfortunately for the Dees Pearce was not, and is likely to miss next week after failing the concussion test.

Collingwood has shown why it is a genuine top four side, running out winners by 32 points after a tough four quarter defensive grind at Victoria Park.

The win was a crucial one for the Magpies as they tightened their hold on a top four place with a big test of games in the coming weeks.

Pies were on defensively as a unit

After a gritty, determination style of game from both teams in the first quarter, the Pies’ pressure and ability to have that first option to the ball saw them dominate the entries inside 50 32-19 and have 10 more marks inside 50.

This is a credit to the defensive line as a unit and the midfield being able to repeat more opportunities inside 50 to reward the Pies forwards, with Chloe Molloy, Mikala Cann, Tarni Brown, Sarah Rowe and Steph Chiocci in her 50th all able to score.

Multiple stars stood out for the Pies

It was a full team effort from the Magpies, with many players having strong performances.

This included the likes of Lauren Butler, who was solid at half back and Jaimee Lambert using her speed and aggression in the midfield.

With the Pies playing that gritty type of footy, the Giants were chaotic due to the defensive pressure that was put on.

From the second quarter onwards, the Giants struggled to get numbers around the contest and get the ball down forward. One positive the Giants can take away was scoring in front of goal, which is something they must continue to grow and build for the next few weeks of the season.

Whilst Alyce Parker was consistent for the Giants in this game, she certainly can’t do it on her own and need to find some of her teammates to provide an option.

One player that was impressive for the Giants despite the result was Jodie Hicks.

Playing a new role in the wing, she was really able to use her speed and showed her hunger at the ball.

Hicks did a great job competing and generating ball movement, finishing with 12 disposals, nine tackles and a mark.