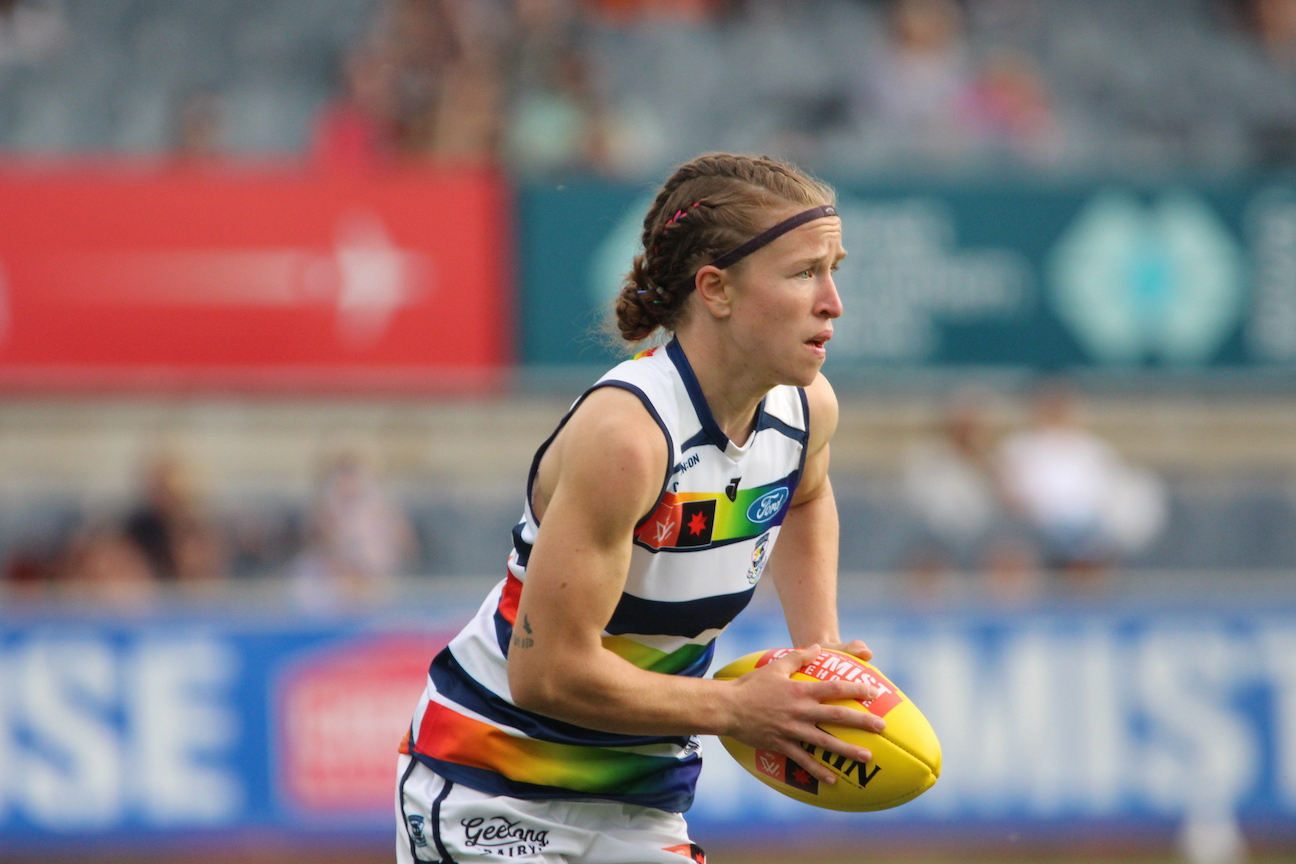 SATURDAY’S action in the AFL Women’s was for the most part a tight affair, with three matches separated by single figure margins, but one team certainly did not follow the formula.

North Melbourne survived a tussle against a spirited Port Adelaide side, Essendon fought hard to deny Sydney their first win, while an inaccurate Geelong got over the line against West Coast.

The one team who did not follow the tight margin formula was Melbourne, who comprehensively beat Gold Coast by 49 points.

North Melbourne notched up its sixth win of Season 7 yesterday against Port Adelaide, defeating the Power by three points. North Melbourne did not have it all its own way, with the Power having the momentum in the first half, but the Kangaroos were able to hang on for the win.

Port’s pressure in this game should be credited, being able to bring the physicality in the first half. Although North’s experience were able to step up, Port should take confidence going into the last two games of the season. Port Adelaide will be disappointed with the skill mistakes that would have reduced the margin, however they were able to win a number of categories, including the clearances, 22-15 and contested possessions, 101-95.

North coughing up inside 50’s in first half

With the Power having 20 inside 50s going into half-time, the number of inside 50’s North conceded will be something North need to fix up.

They won the inside 50 in the end, 35-28, the Kangaroos cannot afford to allow in their last two games teams like Collingwood Richmond easy access to their 50.

To North’s credit, the Roos corrected and adjusted to their game plan, playing more to their structure, with the likes of Ash Riddell, Emma Kearney and Emma King stepped up in the midfield/defensive 50.

The effort of Ebony O’Dea is underrated. The pressure and going for every contest determination is something the Power are lucky to have with O’Dea’s work ethic, and she finished with 11 disposals, nine kicks and three tackles.

With both sides showing sides of their attacking, running game, a resilient Sydney Swans side gave it their all, but it was Essendon that was able to hold on at Ikon Park by two points yesterday, winning 7.6 (48) to 7.2 (44).

Swans resilience should be credited

This was potentially the Swans best outing, not just in terms of the margin in defeat. The Swans structure and having options at the footy was good and the ball movement and finding targets was more lively and something the Swans should take confidence from into their last couple of games.

Zoe Hurrell and Sofia Hurley no doubt have bright futures ahead of them. Whilst kicking their first career goals, their presence up forward should be a shining light for the Swans, as well as their work ethic demanding the ball. Hurrell was on debut, and it also happened to be her 21st birthday so it was quite a memorable day for the young Swan.

Bonnie Toogood using her craft, others stepped up

With Essendon looking to find a spark and break the game open, Bonnie Toogood used her skill and craft in the third quarter, and with her speed and experience to find the open corridor it allowed the Bombers to control the game more on their terms. The Bombers forwards in Sophie Alexander, Daria Bannister and Catherine Phillips also stepped up and used their experience and stepping up in the big moments.

Geelong booked its spot in the Season 7 finals series with its sixth win of the season, defeating West Coast at Ikon Park by nine points. Though the Cats could have won by more, and the Eagles did make the most of their shots on goal, Geelong controlled the game for the most part and came away with the 4.10 (34) to 4.1 (25) victory.

It was yet another typical, consistent Geelong performance, with the Cats able to control the match on their terms. Though the disposal counts were fairly similar (Geelong plus-20), the Cats were able to win the uncontested ball by 22, take 15 more marks – four more contested and six more inside 50 – and have almost double the Eagles’ inside 50s. That allowed Geelong to put pressure on the West Coast defence across the four quarters.

Eagles dangerous when given opportunities

West Coast is a side that will be better for the run this season, with a number of dangerous players who can conjure goals out of nothing. Ella Roberts kicked the first, and then the likes of Aimee Schmidt and Dana Hooker joined in, even when the latter mostly spent time behind the ball. If West Coast can get more inside 50s, the Eagles would be able to put more scoreboard pressure on the opposition.

Georgie makes up for lost time

Geelong would have been thrilled to have Georgie Prespakis back, and while she will not be eligible for the W Medal due to the two-game suspension she served, expect her to pick up another three votes from the game. She racked up 21 disposals, three marks, 12 tackles and eight clearances to be the standout player, at times bursting through the stoppages or pulling down a strong grab, just seemingly doing it all offensively and defensively.

Though Geelong will be an underdog heading into the Season 7 finals series, there is nothing to say the Cats are not capable of causing an upset. They use the ball well – recording a 70 per cent disposal efficiency and just 39 turnovers for the match – whilst being proven at clearances and contested ball, now able to control the outside as well. The Cats defence is elite, and it will all be a case of whether or not their forward line can come to the party against the top four sides. Chloe Scheer could tear a defence apart if she brings her kicking boots, slotting 1.3, but looking like having a bag, and critically laid eight tackles.

Melbourne has put out another solid performance, defeating Gold Coast by 49 points to reaffirm the Dees’ premiership credentials ahead of finals. The Suns were never really in the match, and the margin could have been even higher if things had gone slightly different for the Dees.

The margin could have been so much worse for the Suns

If Melbourne had made more of their inside 50 dominance, particularly early, things could have been even worse than they turned out to be for Gold Coast. In the first quarter alone, Melbourne had eight inside 50s to Gold Coasts’ two, and by the end of the game the gap had blown out even more (45 to nine).

One thing that was really prevalent for Melbourne was how well their structures held up all game. The wall that they set up along both defensive and attacking 50 held up really well, and proved to be quite the obstacle for Gold Coast to try and overcome.

Star youth going to propel Dees well into the future

As has been said a lot this season, the youth of Melbourne’s midfield, the likes of Olivia Purcell, Tyla Hanks, Eliza West and Lily Mithen had another stellar game last night, and are a real core of the team’s success this season. Purcell in particular was a real star, finishing with the 32 touches and five tackles, while West almost had a tackle for every time she touched the ball (11 tackles and 19 touches).

It was a special night for Melbourne skipper and women’s footy pioneer Daisy Pearce, who notched up game 50 in spectacular style. Although only finishing with the 11 touches, she did kick a major and her footy smarts and leadership set up plenty more than that.

Another Dee forward who had a good night was Tayla Harris. At times she was having a field day in Melbourne’s forward line, finishing with the 14 touches, five tackles and most importantly three majors on the board.