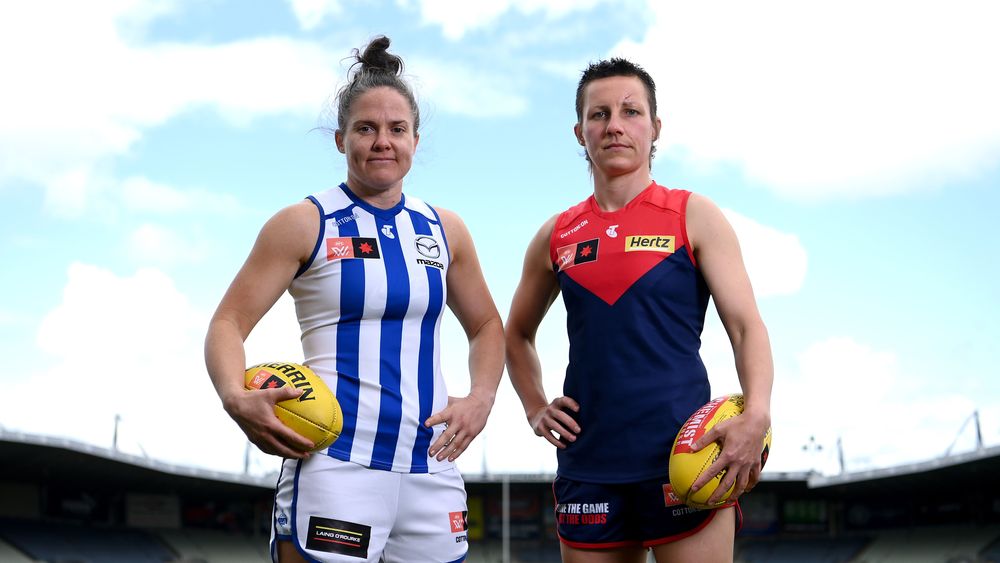 MELBOURNE’s Karen Paxman and North Melbourne’s Emma Kearney are two stalwarts of the competition, and have seen a lot in their time. They also face each other tomorrow afternoon, as their sides do battle for the second spot in the Season 7 Grand Final.

Paxman said she and the Dees were expecting a tough contest at Ikon Park, just like the Round 2 clash between the two sides.

“Each time we play North it is fiery and a heated contest, so certainly there’s a lot of learnings to come out of that game (Round 2),” Paxman said.

“Reflecting on probably our own game, not too sure what round that was, but earlier on in the season I think fundamentally we were a little bit off, but North are always a strong competitor, so it’s going to be hot. It’s finals footy, so that’s what we’re expecting around the contest absolutely.”

Paxman said that the team has done a lot of growing across the season, especially since the Round 2 win.

“I think compared to when we started off the season to where we are now, we’ve taken a lot of confidence in our growth, and I think a lot of that’s come from a mindset standpoint, and we’ve been doing a lot of mindset work over the last few seasons, and I feel like that’s coming into fruition now certainly,” she said. “I think for us it’s controlling what we can control, and the rest should hopefully take care of itself.”

Paxman pointed to what she thought went wrong in Melbourne’s Qualifying Final against Adelaide that saw them get off to a poor start.

“I think our contest was a little bit poor” she said.

“Obviously finals footy is quite hot and heavy, and we were a little bit off the mark in that first quarter when the Crows came out firing, so certainly probably a good little lesson to learn coming into our next final and you can’t start slow in finals certainly, and against North they’re a fast starting side so definitely coming into this week with that in the back of our minds.”

It is not the first season Melbourne has had a week off in the finals, and Paxman believes that past experience helped her and her teammates approach the week off last week in the best way.

“I think it’s just that maturity and it’s the leadership within our group,” she said. The week off is nice, but we know we still have to get to work on certain things and you can’t unwind too much so I guess it’s about balance, having the week off. You can rest up and refresh, but also we still work hard in that break.”

Meanwhile Kearney reassured everyone that her knee, which has given her issues recently, is all good to go.

“Yeah it’s good. It’s pulling up better every game, so fingers crossed it’ll come good on the weekend,” she said.

Kearney said that the way the Roos have gone about this finals series has given her and her teammates extra confidence.

“Previous seasons we’ve been knocked out in an elimination final, so to be able to get the win against the Cats just released a bit of pressure and then got the game looking how we wanted to look against Richmond and really attacked them in that second quarter when we had the advantage with the wind and that got us the win from that quarter really,” Kearney said/

Much like the Dees, Kearney said that her side took a learnings out of the clash between the two sides in Round 2 and have improved a lot since then too.

“But I think, and Paxy probably would have said the same thing, they’ve probably improved since Round 2, we’ve seen enormous growth in our players since Round 2. Vikki Wall was just playing her second game, Taylah Gatt, Tess Craven, Bella Eddey, all really inexperienced players now a bit more experienced coming into this finals campaign and should be good for them.”

Also like Paxman, Kearney is fully aware of what to expect from her opponents tomorrow.

“Melbourne’s one of those ones where they score one goal, they score two, three, four in a row really quickly,” Kearney said. If we can try to maintain some of that or limit their impacts and then when we highlight when they are getting momentum being able to slow that down a bit that’ll help us really well but we’ve got a really good team defence and we’ve been able to limit scoring as much as possible, so we’re going to have to be at our best to stop them that’s for sure.”