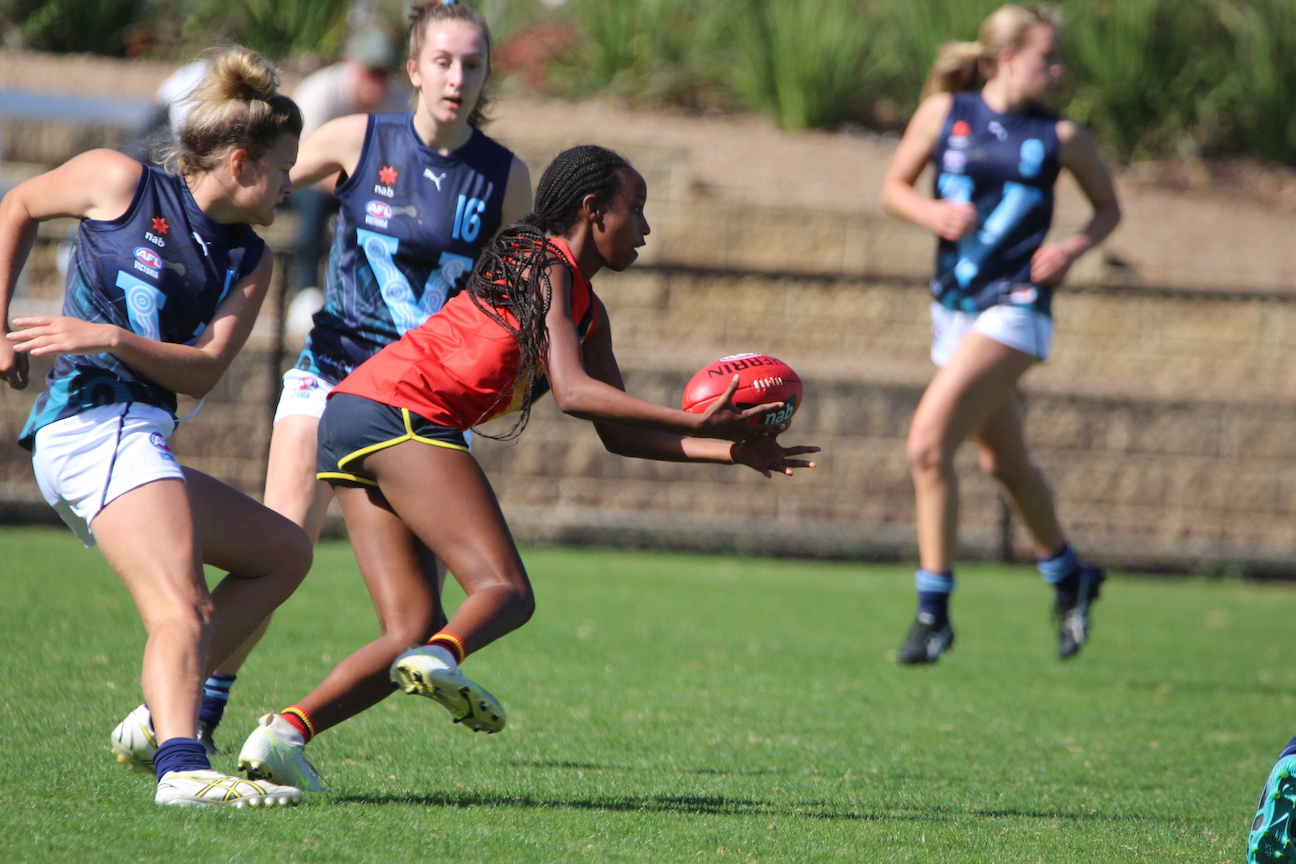 SOUTH Australia most talented female footballers are back in preseason training ready for a huge 2023, with some quality players already seeking different pastures be it through a chance in scenery or zoning. Though there are no trades like at the elite level, former Bulldog Isabelle Starmer has become a Rooster, while North Adelaide premiership player Elaine Grigg is headed to Elizabeth.

As far from a like-for-like as it could be, Starmer is one of – if not the top – ruck in the South Australian National Football League (SANFL) Women’s, coming off Team of the Year honours in 2022. After Roosters ruck Megan Ryan headed to the Bombers, North Adelaide premiership coach Krissie Steen and the Roosters recruiting team were quick to find a replacement, going straight to the top of the Christmas wish list.

Similar to Ryan, Starmer is actually undersized for a ruck at 176cm, but has no problems taking control at the stoppages and winning plenty of hitouts. But not only is Starmer able to dominate the stoppages – 24.6 hitouts per game in 2022 – but the 26-year-old also averaged 16.6 disposals, 4.3 marks, 2.9 clearances, 2.5 inside 50s and 5.8 tackles. Starmer also finished second in Central District’s League Best and Fairest to captain Shelby Smith last season.

Considering the one potential Achilles heel of the Roosters during their premiership year in 2022 was in the ruck contests, Starmer fills that void and presents a worrying sign for the seven other teams. North Adelaide has also signed young Tasmanian Aprille Crooks, with the 167cm, 19-year-old dominating the Northern Tasmanian Football Association (NTFA) last season. A class above for South Launceston, Crooks slotted 34 goals in 16 games and won the league best and fairest.

As those new Roosters walk in the door, tenacious forward/winger Grigg has headed further north to Elizabeth to add some blue to her red and white jumper. The 16-year-old has ties to the club with her grandfather Ray Grigg being a former Executive Director and club patron for seven years last decade. However Grigg’s recruitment is more than just family ties, with the young gun incredibly talented in her own right.

Playing as a high-pressure forward for the Roosters in a premiership year, Grigg averaged 10.1 disposals, 1.1 marks and 6.4 tackles, while booting six goals in eight games. At AFL Under 18 Championships level, she stepped up to lay the three tackles per game to go with nine disposals and 1.3 marks. Though cutting her teeth at senior level as a forward, Grigg is destined to be a hard-running winger, with the 165cm talent dominating at the Under 17s carnival in 2021 (24.5 disposals, 8.5 tackles, 4.5 clearances and 5.5 inside 50s).

In the AFL Women’s Under 17s Futures, Grigg picked up 16 disposals, one mark, two clearances, two rebound 50s and laid seven tackles against the best in her age group. Eligible for next year’s AFLW Draft, Grigg does not turn 17 until December 23. She was named in our 23 in 2023: AFLW Draft Ones to Watch, with her upside enormous, especially with her natural athletic gifts and defensive mindset.

At Central District, Grigg is capable of slotting onto a wing and could play a similar role to Laitiah Huynh. Additionally, with young gun Georgia McKee missing the 2023 SANFL Women’s season with an anterior cruciate ligament (ACL) tear, Grigg can also slot into a role inside 50 and provide a terrific ground level presence.

Another Dog who has left the kennel is experienced defender Lauren Smith. She has headed south to join the Redlegs alongside former Panther Tahlita Buethke. Smith provides not just experience but accountability inside the back 50, while Buethke will bring that lightning speed, and high upside that she has shown throughout her junior career coming through the South Australian Girls Academy. A breakout season with the Panthers in 2022, Buethke averaged 15.5 disposals, 2.5 marks, 3.8 tackles, 2.1 inside 50s and booted six goals from 11 games also spending time forward later in the season.

South Adelaide switched out one former junior state representative with another, as Eagles defender Charlotte Dolan has opted to join at Noarlunga ahead of the 2023 season. Dolan averaged 11.4 disposals, 1.6 marks, 2.9 tackles and 3.1 rebound 50s mostly playing in the defensive half of the ground, but can play further afield on both sides of midfield. Dolan joined Eagles teammate Jordann Hickey at South Adelaide, with Hickey being a former Panther who had stints on AFLW lists at both Melbourne and Gold Coast before playing out the 2022 SANFLW season at Woodville-West Torrens.

In other signings, grand finalists Sturt signed Lucy Earl from Glenelg to provide an extra big body in defence. She is he niece of former Sturt player Andrew Downes who played 154 games in the 1970s and 80s. Having success with plucking out basketballers such as Jess Good in the past, the Double Blues have also signed Adelaide Lightning’s Jasmin Fejo for the 2023 season.

West Adelaide will be keen to bounce back from its disappointing wooden spoon season, welcoming in Central District’s Paige Allan. The midfielder/forward will add some extra pace to the hardened on-ball division, while it is remiss not to mention that potential Pick 1 in the AFLW Draft, Lauren Young will also return to the Bloods for the upcoming season.

Though not crossing from another SANFLW side, West Adelaide has also secured the coup signing of Iilish Ross, a former Richmond and Collingwood AFLW defender. Ross will strengthen the Bloods backline alongside captain Madi Russell, in a much needed inclusion for the red and black. She will also help cover the loss of AFLW-experienced defender/midfielder Beatrice Devlyn who has headed to Woodville-West Torrens.

Devlyn is one of a couple of huge AFLW-experienced recruits, as former Norwood champion and St Kilda AFLW listed ruck Leah Cutting has also joined the club. Cutting has been named in the leadership group alongside captain Annie Falkenberg, and like North Adelaide, the Eagles will benefit greatly from having a strong ruck. Previously they have had to go undersized, but with Cutting in the ruck and Devlyn providing support through the middle, the Eagles are meaning business. The Eagles have also brought in North Adelaide’s Poppy Waterford and former Eagle Hannah Scholar.

Glenelg has looked outside the SANFL Women’s for its recruits, picking up a number of Northern Territory prospects. NBL1 basketballer Serena Waters will try her luck in the league coming from Darwin Salties, while youngsters Andi Moliere and Anju Goninon are a couple of Territory natives who are more familiar with the oblong-shaped ball. Moliere is a 165cm winger from the Nightcliff Tigers, while Darwin Buffetes midfielder/defender Goninon is a 167cm talent who is still only 20.